Art Of Noise: And What Have You Done With My Body, God? 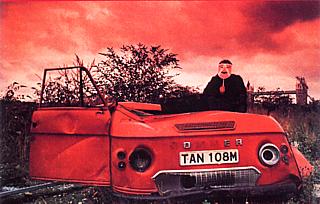 I last wrote about Art Of Noise six years ago. (Read it now, there's useful backstory in there - just be warned that almost every single link on the page has died in those six years.) This was when the band had just completed a series of gigs promoting their 1999 album, The Seduction Of Claude Debussy. Given that this was the first thing they'd done for about a decade, I wondered at the end of the piece what they would do next.

I didn't expect they'd wait six years and then release a four-CD set of twenty-year-old shit from their cutting room floor. And yet, given the ZTT label's long history of remixing and recycling, I suppose it's not that unexpected at all.

The career of Art Of Noise falls neatly into three phases, and And What Have You Done With My Body, God? focusses exclusively on the first one. We're talking 1983 to 1985, when producer Trevor Horn, three of his regular studio collaborators (keyboardist Anne Dudley, programmer JJ Jeczalik and engineer Gary Langan), and rentagob Paul Morley turned the accepted ideas about pop music's manufacture and marketing on their head. Working with the new Fairlight samplers and all manner of digital effects, they made some of the wildest-sounding music of the eighties, while remaining totally anonymous as individuals thanks to Morley's arty packaging strategies. The small number of tracks they produced during that time - no more than 16 or so really, if you ignore the countless remixes - were the result of lengthy periods of experimentation in the studio. This box set consists of three CDs containing 41 previously unreleased demos, outtakes and alternate versions, plus a fourth disc which gathers together some long-deleted EPs on compact disc for the first time.

One of the things I always liked about Art Of Noise, as I said back in 2000, was this - "it was impossible to listen to this music and visualise people playing it: you knew in the back of your mind that it came from five people messing around with electronic equipment that was way beyond your personal budget, but it sounded like it came from some other planet entirely." If there's one thing this set does, it finally allows you to get an image in your head of the creative process that resulted in this music. The structure of the set helps enormously with this. Disc one is all demos, where you can hear the raw building blocks of your typical Art Of Noise record coming together - the enormous drum loops, the random use of found sounds, the fluid song structures. The surprising thing here is hearing familiar backing tracks - say, the drums and car starter of Close (To The Edit) - used as the base for a conventional keyboard solo. As things progress, you can hear the band slowly filleting out all the ordinary elements from these pieces, replacing them with ever more extraordinary ones.

Disc two takes those pieces from the first CD and continues to develop them. Art Of Noise fans looking for stuff they haven't heard before will find most of it on this disc: there are experiments that ended up being hacked down to mere seconds on the finished album, and elements that they repeatedly tried to make work but just gave up on eventually. (One particular sample - an old blues singer repeating the phrase "ain't no good life" over and over - turns up in several places.) Disc three is pretty much a series of alternate takes of the tracks that eventually became the 1984 album Who's Afraid Of The Art Of Noise: while the final disc includes their still-staggering debut EP Into Battle With The Art Of Noise, plus the 20 minute compilations of the remixes of Close (To The Edit) and Moments In Love that were released as - ha! - cassingles in 1985.

You've done the sums by now - 41 demos from 16 songs means there's a lot of duplication on here. In fact, some of the key tracks from Who's Afraid are featured in at least half a dozen versions. Is it worth it? Depends. I was surprised how little the repetition got to me: the closest thing to a low point is the eleven minute grind of The Focus Of Satisfaction, an uninspired piece of noodling over the rhythm of Who's Afraid's title track. But you can genuinely hear these songs progress and grow throughout the set, as elements are added and taken away in search of the perfect sound. You really get to appreciate the work of engineer Gary Langan over the four hour running time: the raw sound of the Fairlight sampler can be a toppy and unpleasant thing, and it's a delight to hear him create endless variations of aural texture from it through judicious use of the mixing desk. You may think this is a shameless piece of marketing aimed at ripping off people who own the original tracks already, but in fact I think it's the opposite: if you don't already know these songs inside out, there's no reason on earth for you to buy this set. It's your familiarity with the material that will determine how fascinating you find the journey Art Of Noise took to get there.

Plus, as this is ZTT, the packaging is a beautiful thing in its own right - the four discs come inside a double-height hardback book case, with copious and fascinating sleevenotes from all five band members. And those notes just emphasise the other key thing about Art Of Noise's music - it was experimental as hell, but it was fun, and audibly came from people just mucking about with sound to see what would happen. Time and again, it turns out that the key things people associate with the band were the product of happy accidents. My favourite anecdote in the book comes from Anne Dudley, remembering how they spent an afternoon in an old church recording an organ: in the end, the main thing they used was the echoing sound of Anne walking through the church at the end of the session, which was looped into the rhythm track for Memento. Dudley's comment: "I always wanted to call that Anne Did Those Feet but they never got it."