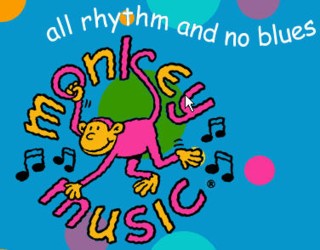 For those of you who weren't here in the old Demon Internet days, a brief explanation. Back then, I was always worried about how my website tended to be slightly less than child-friendly, what with the occasional cheeky picture and the use of naughty words for cheap comedy effect. Hence a tradition that stood me in good stead all the way through eight years or so of The Unpleasant Lair: The Simian Substitute Site Of The Month. Each month, I'd find a nice inoffensive site involving monkeys, and put it up as a link for the kids to follow in case my stuff made them scared or damaged enough to end up like, let's be honest, the rest of us.

Times change, I move to a blog, and I barely even consider the possibility of keeping the SImian Site going. And then, yesterday evening, Suze plaintively wrote to me asking where the letters page is on the new site. And I hadn't really the heart to tell him that unless I get a decent quantity of genuine letters or amusing spam, I'll probably just bundle together my mail into a big digest article once every couple of months. Generally, I'm expecting more of the interaction with readers to come from the comment sections on the pieces, rather than general emails. Poor Suze will have nowhere to talk about underwear or City's relegation prospects.

But then it struck me that the first of the month was coming around. So, to kill two birds with one stone: on the first day of each month (as before) I'll highlight a monkey-related site, plus the comments section for that entry will be made available as an open forum for Suze (or anyone else) to rabbit on about anything they like. I reserve the right to delete posts that I take a dislike to for any reason, of course. But other than that, the only restriction is not to talk about anything I've reviewed elsewhere on the site - use the comments sections on the individual pages for that.

The Simian Substitute Site for August 2006 is Monkey Music. It promotes a series of classes which introduce music to young children all over the UK, from three months old to four years. The site has lots of tunes embedded in it, which may leave you chuckling or tearing your speakers out: personally, I think they're rather fun.

Gentlemen, ladies, the floor is yours. Try not to leave shite all over it.

Hmmm, think you're missing the charm/point of the old letters page. Although my interests are exclusively about whether Underwear and City are soon to be going down, it still provided a forum for anyone to bring up the weird and the wacky, not already covered by your good self. The problem with using only this format, is that it is basically driven by what you have seen, and whether that corresponds to your readers having seen the same thing themselves, thereby being in a position to respond (anyway your site at the end of the day).

It's true, one of the things the move has done is focus the user responses on the stuff I write. As I said, I'm hoping that I'll be able to run collections of received emails every so often, including ones I get from readers of the old, defunct site. But I thought that having a playpen post like this once a month would give people what you're asking for: the opportunity to write about any old nonsense, without it being driven by something I've suggested. Let's see how it works.