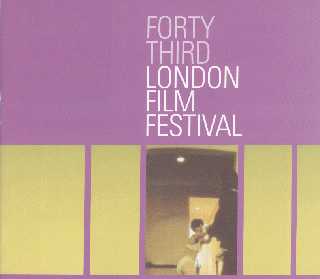 1989 was one of the few years when my abortive attempts to keep a diary actually held up as far as November, so ten years on I'm able to look back and see what my first Festival felt like. One thing hasn't changed since the beginning: I managed to catch 43 films in the space of a fortnight. However, I somehow managed to put in mornings at work and still get out to movies in the afternoon and evening: I must have been barmy, frankly. These days, it's taken for granted at the office that I'll desert my moderately responsible job in the computer industry when November comes around.

Looking back, it was an interesting selection of 43, and some of the choices I made are baffling to me nowadays. God's Will, directed by one of Martin Scorsese's ex-wives, in which God is a middle-aged American woman who plays golf. American Stories, tales of the Jewish-American experience, apparently featuring the following exchange of dialogue: "Is shitting a physical or an intellectual act?" "If it was physical, we'd hire someone to do it." Romauld and Juliette, a French comedy about a yoghurt executive and his black cleaning woman. Sure, I saw a few future classics in advance of the rest of the world (notably Cinema Paradiso and Leningrad Cowboys Go America), but I think that was more by accident than by design.

So ten years later, how much has changed? Well, booking for the Festival has now become a full-blown military operation: every September Spank's Pals gather in a wine bar somewhere in the vicinity of Waterloo Station, attack a copy of the LFF programme, and somehow come up with a plan to buy lots of tickets (bearing in mind advance booking is limited to two tickets per NFT member). But I still end up seeing forty or so films in just over two weeks: and given that one of them this year features a Belgian family's attempt to break the world record for door opening, I'm not convinced my choices are getting any better.

Still, if nothing else, instead of scribbling my opinions in a WH Smith's diary, this year (like last year) I get to share them with you on a daily basis on this site, from the Opening Gala on November 3rd to the Closing Gala on November 18th. And Spank's Pals will be chipping in too whenever they feel the urge. Watch this space.

The Official London Film Festival site is once again being run by the good people at Film Unlimited, who did such a splendid job last year. It's a combination of original material and reprints from parent newspaper The Guardian, the latter including the odd contribution from Peter Bradshaw, Britain's crappiest film critic. However, at first glance some of the features from last year's site appear to have been quietly dropped, notably the facility for lippy users such as yours truly to post their own reviews on the site. They say that opinions will be accepted on their usual talkboards at Talking Film, where I'm a bit of a regular: expect potted versions of these reviews and gratuitous plugs for this site to appear there as the Festival progresses. (You'll need to register to enter Talking Film, but not the rest of the LFF site.)

The Unofficial London Film Festival site [dead link] is an interesting idea, put together by a punter who's noticed the lack of interactivity on the official site. Essentially it's a bunch of bulletin boards - some public, others only accessible when you register - for the discussion of all Festival-related matters. It's a lot more flexible than the official site - it managed to scoop them on the announcement of late changes in the programme - and should get even more interesting once the LFF hots up and people start talking.

Film Four have got their own coverage of the LFF going on as well, sending two young filmmakers out with DV cams to produce a daily video diary [dead link] available for streaming. If you're curious to find out about those after-film parties that us plebs don't get invited to, this may be the place to visit.

The British Film Institute, as the main body that runs the Festival, the National Film Theatre and assorted arthouses across the country, deserves a plug for its hard work in keeping British interest in global cinema alive. So here's one.

Six Degrees [dead link] is a nifty British webzine dedicated to the discussion of film, and their LFF survival guide [dead link] has a lot of useful information on how to approach the Festival if you've never been before.