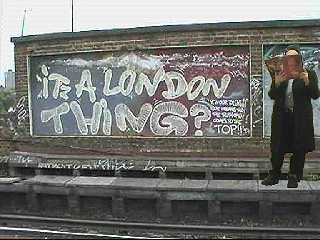 Except it isn't, of course. I mean, it isn't the London Film Festival any more. Thanks to a fairly humongous sponsorship deal that LFF boss Adrian Wootton has done, the financial future of the Festival has been secured for the next three years: but at the cost of the principal sponsor demanding that their name is now an integral part of the event's title.

Now Spank's Pals can be a fairly bolshie lot at the best of times, and some of them have taken this rather badly. Ken has taken to pointedly referring to it as the LFF rather than the RLFF in correspondence: as he says, "they haven't paid me to give them advertising". Except in a way, they have: even though the ticket prices are as gruesome as ever, Wootton insists that they would be even worse without the cash injection from sponsorship. As it is, he can boast that this year tickets cost exactly the same as they did last year.

So, grudgingly, I'll mention the sponsors once and once only. Regus. If you're looking to rent some office space, they're probably just as good as, er, whoever else it was you were considering. 'Kay? 'Kay. Let's not talk about them again.

Aside from this, it's business as usual at Britain's biggest film festival, now in its 44th year. The aim is still to collect the best in world cinema and make it as accessible as possible to the general public. Once again, apart from its base at the National Film Theatre on the South Bank, the LFF also takes over the West End for over a fortnight: this year it's hogging some space at the Empire as well as the usual Odeon West End. Filmmakers from all over the place will accompany their films, and will be available to meet their public afterwards (leading to extraordinary situations like last year's fashion clash between Our Hippy Correspondent and RZA of the Wu-Tang Clan).

And as in 1998 and 1999, we'll be covering it all for you daily. I'll be reviewing more films than anyone else you can name (go on, try it), and Spank's Pals will be throwing in their opinions as well for balance. We'll bring you the hits, the misses, the gossip, and anything else we can still remember the morning afterwards. Watch this space.

The Official London Film Festival site is, as ever, your first port of call. But this year it's under new management, and is now being hosted by the good people at Six Degrees [dead link], the rather fine movie webzine. Full programme details, interviews with key players, news of late changes, and the promise of even more once the Festival actually starts. That programme cover image is a bit shit though, isn't it?

Film Unlimited ran the official LFF site in 1998 and 1999, but aren't doing it this year. "Pressure of work," they claim. I can believe that, as FU has blossomed over the last two years into probably the finest movie resource in the UK, if not beyond. As its parent newspaper The Guardian is still sponsoring the LFF's celebrity interviews, this'll be the place to find full transcripts of this year's live appearances by Ang Lee, James Caan and Ellen Burstyn. And its Talking Film talkboards are home to what's been described as "the most intelligent film community on the web", despite the presence of opinionated nutters like the mysterious SpankTM. Register at Talking Film to join the year-round movie discussions, and find out about our evil plans to stalk Philip Seymour Hoffman while he's in town.

BBC News did a feature on this year's LFF when it was launched back in September, and if you can handle a 56K Real Video stream you can see their video report [dead link].

The British Film Institute runs the LFF and other  Festivals, the National Film Theatre, Sight and Sound magazine and all manner of other stuff dedicated to the preservation and promotion of film as an art form. And finally, it's got a web site that's worthy of it. Took you long enough, guys.

Dumbass And The Fag [dead link] is an entertainingly bitchy movie review site (sample line: "Paul Thomas Anderson has six fans, and only one of them isn't constantly drunk"). They recently published a curiously timely analysis of why all internet movie critics are crap. Hey, I could have stolen that image on the first page of the article, but I didn't...

No Logo is the official site promoting Naomi Klein's best-selling treatise, in which she describes how consumerism and sponsorship have engulfed the world to such an extent that you can no longer find any cultural space that's untainted by corporate branding (not wishing to mention any office space hire companies by name here). She also reports on what attempts are being made to reverse the tide. If you've got a sufficiently well-developed sense of irony, maybe you'd like to consider visiting the newly-opened Monkey Mall and buying the book from our media partners WHSmith or Amazon.com, thus helping me to make enough money to pay for all these bloody films I'm seeing.