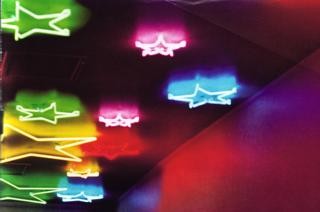 People keep asking me why I don't apply for press accreditation for the Regus London Film Festival. They may have a point. After all, most publications that cover the festival can only manage a film or two a day at most. Here at the internet's leading australopithecine arts review site, we do things properly. In 1998, 1999, 2000 and 2001 I've personally provided you with an average of three film reviews a day within 24 hours of them being screened, and that's before you factor in the additional contributions made by Spank's Pals. So don't imagine that I haven't thought about trying to pass myself off as proper press. Particularly when the credit card bill for the tickets arrives in November.

But in the meantime, I'm doing all this with my own bloody cash. Except for tonight. Because Sandra Hebron, in her newly exalted position as Artistic Director of the festival, has decided to do a free launch of this year's programme for the general public, similar to the one they do for the press. It's a bold and interesting idea, slightly marred by the tube strike it coincided with, resulting in the auditorium only being half full of non-paying customers. Still, those of us who made it there got to see an hour or so of trailers and clips from the 46th Festival's programme.

For those of us who are National Film Theatre members, there weren't too many surprises: we'd already had the programme for a couple of weeks and sent in our advance bookings. So all this preview allowed us to do was confirm our choices were right, or realise how horribly wrong they were. For the most part, my initial hunches seem to have paid off. The Opening Gala, Stephen Frears' Dirty Pretty Things, looks intriguing and makes me glad I've got a ticket for it: the Closing Gala, Thaddeus O'Sullivan's The Heart Of Me, looks dull as dishwater and makes me glad I decided to give it a miss. Aki Kaurismaki's The Man Without A Past appears dour and hilarious, as expected: Paul Thomas Anderson's Punch-Drunk Love seems surprisingly restrained, judging from its trailer. Latin America is well represented. Documentaries are very well represented. And Clyde Jeavons sounds justifiably proud of the various archive restorations he's putting on this year, including Rita Hayworth in a rare 3-D print of Miss Sadie Thompson.

Clips and trailers are all well and good, but no substitute for seeing the whole thing. So, for the fifth year running, Spank and the Pals will be virtually living in the cinemas of London for two and a bit weeks, writing daily reports and giving you all the latest on the best and worst of the festival. And we're still not getting paid for it. Watch this space.

The Regus London Film Festival website (and that's two mentions for the sponsors now, so rest assured you won't be hearing about them again till 2003) is, as ever, the best place to begin. Full programme listings [dead link], news and features [dead link] on the various films and filmmakers involved, and this year - finally! - you can book on line [dead link] through the site as well. Other useful features include the ability to post your own reviews on all films, and an email newsletter [dead link] which will keep you up to date with the latest developments all year round. And if you can't get to London but you're still based somewhere in the UK, look out for the festival tour [dead link, look, it's a completely different site layout now, okay?].

The British Film Institute continue to do all their usual splendid work for the promotion of cinema as an art form: organising the LFF and other Festivals, running the National Film Theatre, publishing Sight and Sound magazine, and so much more. Shame about that whole mess with the Museum Of The Moving Image [dead link], though.

Guardian Unlimited Film, the film section of The Guardian's website, is still the best movie site in the country, despite the dubious people who hang around its talkboards. They'll eventually have a dedicated LFF news and reviews section (but for now you'll have to make do with their general film festivals page), they'll be publishing transcripts of the festival's Guardian Interviews as and when they happen, and you can see if you can spot a few of the regulars from here on the LFF talkboard threads.

Shadows On The Wall is a British movie webzine, mentioned here because they seem to regularly cover the LFF with even fewer resources as I do. And the guy in charge manages to attend the St Louis International Film Festival at the same time, which is just bonkers, frankly.

Wow I am not sure if this seems like a really long time ago, or what. Interesting reading some of the reviews again though.

Click on the English version of the link and you should see a picture of my new bike (see there should be more of that sort of stuff on this site).