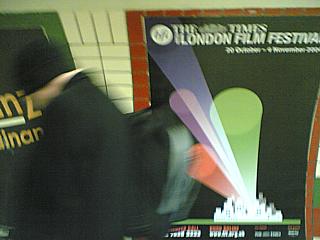 What's to be said this year that hasn't already been said here? Well, for the newcomers amongst you, since 1989 I've been taking two weeks off every autumn to hit Britain's best film festival hard. And by 'hard', I mean seeing forty-odd films during those two weeks. Since 1998, I've also been writing about those films on this site, with additional contributions from Spank's Pals when they feel up to it. The result, I'd humbly suggest, is more comprehensive coverage of the festival than any newspaper or magazine will be providing: put bluntly, it's only internet obsessives like meself that have the time on their hands to do this sort of thing.

As ever, it's difficult to spot trends from a quick look at the programme, but for the sake of an introduction let's have a go. Once again, South-East Asian cinema and documentary films are strongly represented - there's even a documentary gala screening this year, for the first time. The talks and interviews with actors and directors look intriguing, as the organisers seem to have avoided big names and gone for interestingly left-field choices instead. The mainstream galas also include a couple of less obviously commercial treats, as well as the usual crowd-pleasers specifically designed to lure in the casual West End punter. The Closing Gala, David O Russell's I Heart Huckabees, is such an interesting prospect that half a dozen or so of Spank's Pals have actually forked out the twenty-five quid to see it. However, after the experience of All Or Nothing in 2002, we're avoiding the Opening Gala of Vera Drake ("Mike Leigh's award-winning abortion" - View London). And aside from the glitz of the galas, there are any number of unknowns and wild cards scattered across the programme. In the end, all you can do is watch as many as you can and see what takes your fancy.

And each day over the next two weeks or so, that's exactly what I'll be doing. Watch this space.

The London Film Festival website is where it all starts, as ever. See the latest news on the festival, discover what films and special events are showing, watch trailers for the festival films, book tickets online, enter competitions for freebies, find out when the LFF's UK tour is coming to a cinema near you, and much, much more! (Actually, no, that's pretty much it.)

The British Film Institute continues to act as the cheerleader for film culture in the UK, with its network of cinemas in London and across the UK, regular film festivals (not just this one), and their magazine Sight And Sound. The website documents all their work, and includes a handy Film Links Gateway with loads of other film-related sites.

The Times is in the second year of its three year tenure as Title Sponsor of the LFF, meaning that we're supposed to call it The Times BFI London Film Festival whenever we talk about it. But stuff that. The paper's film section will inevitably be focussing on the LFF during its run. And as an interesting consequence of that...

...The Guardian will also be focussing on the LFF in its own Film Unlimited section, but to a lesser degree than in previous years. Note in particular that the Guardian Interview strand of this year's festival has been replaced by Times Screen Talks [dead link]. Has there been a falling out? Elsewhere on the site, I still have a residual love for the Film Unlimited talkboards, but I must admit they've become a little bipolar of late. Some days, they're still the sharpest and most entertaining film discussion forum on the interweb: other days, they're a highly intensive twat farm. Visit the LFF 2004 thread and see how they're feeling today: you'll need to register if you want to join in.

Time Out has sneakily chosen the opening week of LFF 2004 to launch their new Time Out Film site. Although to be honest, it looks just like every other movie site out there, with news, London cinema listings and their own discussion forum [dead link] (but at the time of writing, nothing specifically about the LFF, which seems like a curious omission). If you try to access what may well be the most useful part of the site - the film reviews - then you'll be told you can't do that until you take out a subscription to the magazine. Or, presumably, steal a password from someone else who subscribes to the magazine. [winks knowingly at The Belated Birthday Girl]

Libraries For The Future is why the London Film Festival has a .org.uk address, rather than a .org one.

Back in a minute, I am just going to get a hot chocolate.

You're not bringing that hot chocolate into my comments section, scumbag.

Actually, come back a minute, Suze. See those movie site links above? Click on the one for Edgeplay: The Story Of The Runaways. Then click on 'Enter Site', 'Press', 'Reviews' and... oh, you'll probably work it out from there.

Congratulations. And no, I don't believe you're entitled to any money for this.

Well obviously they have sent you a cheque, and your just hanging on to it. Still no worries, my cut should cover the cost of this years festival tickets that you've fronted up for me.

Some rather sad news concerning the Runaways: http://www.cbc.ca/arts/story/2006/10/23/west-obit.html