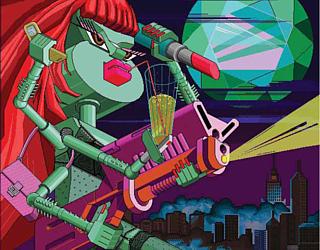 October's going to be busy. Regular readers will expect this, but this particular October's going to be even busier than usual, for three reasons. The first reason, inevitably, is the London Film Festival. The Spank media empire has provided daily coverage of the LFF since 1998, and a mere change in format isn't going to stop us doing that. So, from Friday October 20th, we'll be going into daily update mode to bring you the latest news and reviews from the film festival which, compared to all the other film festivals on the planet, is the nearest one to my house.

The second reason is also to do with the LFF. As you've probably noticed, in the past few days I've reprinted the index pages from the old site's London Film Festival coverage from 1998 and 1999. And, yes, I'm planning to do that for all the years I've been covering the festival, right up to 2005, in order to give newcomers a chance to catch up. Hopefully, I should get all those posted within the next couple of weeks, before the 2006 festival starts.

Thirdly and finally, there's the small matter of our visit to Japan last August. You've already seen what we did on Sado Island during Earth Celebration: at some point over the next couple of weeks, I'll be contributing a piece about the various places we stayed at during our travels, and The Belated Birthday Girl will be telling you about decent places to eat and drink there. Adding all those together, I make that 22 individual posts you can expect in October, if everything works out right. Happy now?

In the meantime, the current business is the Simian Substitute Site for October 2006, which confusingly is called Spank The Monkey. (This isn't unusual, of course. The most frequently accessed page on the old site used to be Master Of My Domain, a list of ten other websites that come up in a search for 'Spank The Monkey'. One of these days I should update that piece, because seven years after it was written, only five of those ten sites still exist.)

This particular Spank The Monkey is an exhibition of urban and street art taking place in Newcastle and Gateshead from September 27th 2006 to January 7th 2007. The main venue involved is the BALTIC Centre for Contemporary Art, but there are outdoor displays to be found all over the area. 22 artists are involved, including the notorious Banksy: the exhibition site allows you to sample their work in various ways, such as a 2Mb downloadable catalogue, podcasts from the artists, and snazzy wallpapers and fonts for your desktop.

If you go along, let me know if it's any good - I'm kinda tied up here in London at the moment, as you can see. And, as usual, if you've got anything you want to say about anything else, the comment box is open below. Go for it.