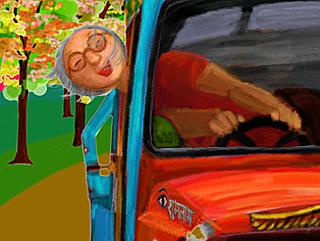 I'm sure the National Film Theatre will be lovely when it's finished. Right now, though, it's an absolute bugger trying to get into NFT3. There's no way to get into the cinema without actually leaving the main building: the one half-sensible entrance opens out directly in front of the screen, meaning that it's reserved purely for wheelchair users: and the only other way in is up several flights of concrete steps up the outside of the South Bank Centre. Having negotiated all this in the pouring rain and settled into our seats, you can imagine our irritation when some sort of bedraggled tramp walks in through the wheelchair entrance, proclaiming loudly to anyone who'll listen that he couldn't be bothered walking up the steps. He also, it transpires, can't be bothered sitting in the seat he's been allocated, and plonks himself on our row a couple of seats away. Like good British people, we spend the next few minutes trying to avoid direct eye contact with the tramp.

Which is probably why we fail to notice that the tramp is, in fact, Victor Spinetti, who provides some of the voices for the first of this year's collection of animated shorts. Chris Ketchell's Cosa Raccomanda Lei? utilises Spinetti's undeniable vocal skills (which have held up better than his hair) in a one-joke story showing the dangers of going on holiday armed with only the Italian for 'what do you recommend?' It's a simple gag, possibly a little too reliant on Italian stereotyping, but at least it manages to do its job in a tight four minutes. Unlike the one that follows, Vera Neubauer's The Last Circus: its use of knitted characters to perform all manner of unspeakable acts inspired by fairy tales is suitably disturbing at the beginning, but simply can't sustain the full 23 minutes.

But after this low point, there are five absolute crackers in a row. Michael Dudok de Wit's The Aroma Of Tea gets across just how magical an art animation can be: we watch a small brown circle making its way though a maze for a few minutes, and we're empathising with it by the end. Andreas Hykade's The Runt looks like a colourful piece of animal whimsy at the beginning, but gradually reveals a darker heart at its centre. Stefan Mueller's Mr Schwartz, Mr Hazen & Mr Horlocker is a beautifully constructed piece showing a curious story of bad neighbourliness that becomes clearer when viewed from a second angle. Ian Mackinnon's Adjustment is possibly the most astonishing technical achievement of the afternoon, using a mixture of flipbook animation and live action to track the breakdown of an obsessively documented relationship. And Gitanjali Rao's Painted Rainbow is the most flat-out charming of the set, showing an old woman escaping from her drab life via her colourful collection of matchboxes.

Monika Forsberg and Susie Sparrow's We Believe In Happy Endings is a warped depiction of what Alan Bleasdale once described as 'a normal night out, these days'. It doesn't do anything particularly radical in its depiction of nightlife becoming feral, but it's watchable enough. It's a commission by the commissioning body animate!, who are also responsible for Interstellar Stella by Al + Al, whose work we last saw at the British Animation Awards shows. Taking the evidence of this film and their BAA entry Perpetual Motion In The Land Of Milk And Honey, it looks like the Als can produce world-class CGI images, but have no idea how to make them resonate with each other, never mind resonate with anything in the outside world. Fortunately that's not a problem for Joanna Quinn, whose hand-drawn comic shorts have been a regular feature at LFF animation programmes for as long as I've been going to them. Dreams And Desires: Family Ties features her regular character Beryl, who's now taking a film course, resulting in the inevitable chaos when she's asked to video a friend's wedding. Comedy shorts always have an unfair advantage in programmes like this, but Quinn's usual attention to comic detail make this a good one to finish on. 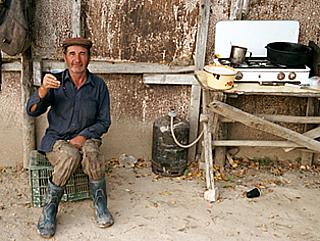 One downside of the animation programme, though: a late start, introductions from all the filmmakers present, and the time taken with switching between multiple projection formats, all conspire to make the programme overrun by twenty minutes. As a result, we end up missing the first fifteen minutes or so of our next film. Luckily, Primo Levi's Journey is (in the most reductive terms possible) a road movie, and therefore somewhat episodic: we end up basically missing the first episode or two, but can pick things up fairly quickly from there.

In 1945, the writer Primo Levi spent ten months of his life travelling from Auschwitz back to his home in Turin, a journey he subsequently documented in his memoir The Truce. Sixty years later, director Davide Ferrario took a small film crew out along the same route to see what it looks like now: their 2005 footage is played alongside voiceover narration taken from Levi's descriptions of 1945, and intercut with archive footage from all points in between. I can't tell you about the section of the journey between Auschwitz and Ukraine, unfortunately. But I can tell you that in Ukraine, Ferrario finds out about the Ukrainian musician who was beaten to death for not being Russian enough, just five years earlier: in Belarus, filming is hilariously hijacked by the local council's Minister For Ideology: in Chernobyl, we see a community that had the heart torn out of it by the 1986 power plant disaster: in Moldavia, we see another community dying, because all the young people are emigrating: and in Romania, we see how the local economy is only just managing to survive because of Italian outsourcing. The journey winds up in what we now have to call Old Europe, where the fall of Communism is marked with abandoned statues and unexpected t-shirt designs. Finally, in Turin, an old friend of Levi's pays him a touching tribute.

It's always dangerous to jump to conclusions about a film when you join it part way through. Initially, my feeling about Primo Levi's Journey was that it was a rather traditional travelogue of Eastern Europe, given possibly undeserved gravitas by Levi's beautiful narration. But gradually, you get to see what Ferrario is doing: not just trying to show the differences between then and now, but also to point up the parallels. In the post-screening Q&A, he suggested that a simple dramatisation of Levi's journey simply wouldn't work (a previous adaptation of The Truce by Francesco Rosi apparently failed quite badly). Ferrario's plan was to use the contemporary footage to evoke the same things that Levi felt as he crossed Europe. In some cases, it's a simple visual allusion: Levi came across a camel in an unexpected location, and Ferrario talks to the owner of a travelling zoo. Sometimes it's a little more complicated: the German leg of the trip is represented by a neo-Nazi rally, to depict how uncomfortable Levi felt entering Germany so soon after the end of the war.

As the film progresses, it stops alternating between the past and the present, and somehow manages to be about the whole sixty-year period all at once. There's deep emotion to be found here, but also a sly sense of humour about the jokes history has at our expense: the Belarus section is particularly delightful on that score, as the council spies on the film crew, the film crew secretly videos the council, and the resulting footage of the collective farms is edited into an Eisenstein pastiche. The result is a gloriously complex stew that received the best possible compliment from an audience member afterwards: it makes you feel the same way you feel when you read Levi. Now all I have to do is find out how I can watch the first fifteen minutes. 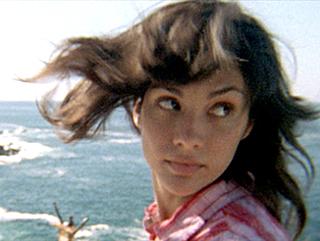 You may have got the idea from Amores Perros and 21 Grams that Mexican cinema currently specialises in multi-stranded narratives that slowly come together. Well, here comes writer/director Gerardo Naranjo with another one. It follows three main characters as they go about their business in Acapulco. Fernanda (Diana Garcia) is playing off her two boyfriends against each other, which is never a good idea when both of them tend to get violent if they don't get their own way. Jaime (Fernando Becerril) has walked out of his office job with the payroll, and is trying to work out if he wants to start a new life or just end his current one. Tigrillo (Miriana Moro) has run away from her mother and is out on the streets offering 'massage and relaxation' to anyone who can pay for it.

The Amores Perros comparisons are given even more weight by the presence of Gael Garcia Bernal as an executive producer (along with his mate Diego Luna). Sadly, Drama/Mex simply doesn't hold up to the comparison. The main thing you take away is the film's unique look: relentlessly shaky hand-held camera, frequently drifting out of focus, and shot in light levels so low you could put your fist between the lumps of grain on the screen. All of which you could possibly describe as vibrant, high-energy filmmaking, but only on one condition: that you give a damn about the characters that are being filmed. And you don't. None of the leads are in the slightest bit sympathetic, and we're not given anything like enough background information to convince us we should be interested in them. Apart from some subtly disorienting shifts in the timelines of the three stories, there's not much else to hold your attention, making Drama/Mex the closest thing to a bad film I've seen so far this festival.