Reviewed today: The Holy Mountain, In The Pit, Lights In The Dusk, Love Story. 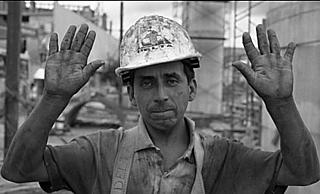 You know what Mexico City's like: they could increase their gross national product twentyfold if they introduced a Congestion Charge like London's. A huge motorway bridge has been planned in order to ease traffic congestion, and Juan Carlos Rulfo's documentary follows some of the construction team over a three year period. We meet Shorty, the foreman who has the endearing habit of taking every question and firing it back at the interviewer. There's El Grande, the team loudmouth who boasts about his previous exploits as a gangster and wifebeater. We're also introduced to the driver who carts huge sections of bridge on the back of his truck every night, the woman who works as a security guard, the ladies' man El Guapo, and many more.

In a time when most documentaries are about huge, life-and-death subjects, In The Pit's ambitions are surprisingly small: merely to show us some of the people working on a Mexican construction project. They're like construction workers the world over - they harass passing women, they call each other names (though frankly, the guy they call 'Shrek' is just asking for it), and many of them don't appear to have any sort of real life outside work. Rulfo interviews them all sympathetically, while they continually draw attention to the filming process: gradually we get to know and love these guys.

It's a fairly standard workplace documentary, but Rulfo has two secret weapons up his sleeve that make it much more cinematic than these things tend to be. The first is Leonardo Heiblum's score: constructed from looped samples of construction noises, it fades in and out of the background sound to extraordinary effect. The second is the way he keeps the true scale of the project vague until very late in the film: and then we get a final shot which shows just what these guys have been working on for the last three years. That single shot just might be the loveliest thing I've seen so far this festival. See it to believe it. 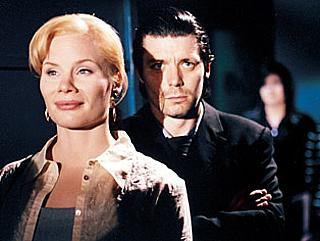 I've mentioned before how I first saw Finnish director Aki Kaurismaki at one of my earliest London Film Festivals, and fell in love with the guy almost immediately. Not only were his films little masterpieces of downbeat comedy, but the director himself was hilariously good value in post-film Q&A sessions. Sadly, he doesn't seem to travel to the UK for these things any more - if you were at this screening, you may have heard me ask actress Maria Jarvenhelmi about that. Still, at least the films continue to make it over to this country. Given that this is the third film in a trilogy covering the subjects of unemployment, homelessness and loneliness, it's good that people are still willing to distribute them in the current climate.

Lights In The Dusk's protagonist is the security guard Koistinen (Janne Hyytiainen). His job's going nowhere, and he finds it very difficult to get on with other people. Suddenly, he meets Mirja (Maria Jarvenhelmi), and they start going out. Could his life be about to change? Well, yes, it could: but this is Kaurismaki, so initially it won't be a change for the better.

It has to be said that this is a slightly bleaker film than we normally associate with Kaurismaki. It's generally accepted that the characters in his movies will start off glum and get glummer, but that things will eventually turn around for them. In this film the turnaround does, indeed, come: but it's very late, and not quite as much as you'd hope for Koistinen. And there isn't as much flat-out comedy as we've seen from the director in the past, although his usual deadpan style can still make you chuckle at the indignities heaped upon his leading man. For now I'd say Lights In The Dusk isn't quite as good as the other two films in the trilogy (Drifting Clouds and The Man Without A Past), but that may be because I'm still trying to get my head round Kaurismaki's radical idea of having his Empire Strikes Back at the end of the trilogy rather than in the middle. 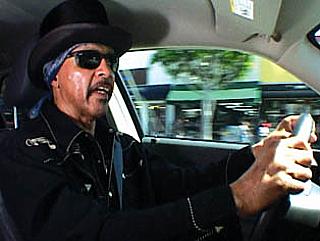 LFF programmer Michael Hayden - I'm trying to avoid calling him Low Fat Morrissey these days, it's a bit rude and you never know who might be reading - anyway, he tends to specialise in music documentaries, and over the years I've seen him introduce quite a few of them at the festival. I've only got two planned for this year: the first one is the story of sixties legends Love, particularly lead singer Arthur Lee, who sadly died of leukaemia earlier this year.

In what turned out to be one of the last interviews of his life, Lee describes his early days in music with childhood friend Johnny Echols. They started out in a school band, moved with terrifying speed into studio session work, and pulled in a couple of other people to form the group that eventually became Love. They quickly became the leading band on the Hollywood scene, with the added curiosity value of being racially mixed. Jac Holzman of Elektra Records discovered Love at a club he memorably describes as being "like the Black Hole Of Calcutta with a door charge", and quickly signed them up. The rest of the movie tells the story of the band's first three albums, culminating in the acknowledged classic Forever Changes, and then skims quickly over the band's history after that. (As acknowledged in the Q&A, which featured surprise appearances by Echols and Holzman, Arthur Lee's post-Love career could be a separate movie in its own right.)

Music documentaries have built up their own set of cliches over the years, but Mike Kerry and Chris Hall's film has a freshness that avoids all those cliches. One interesting decision they've made is to have Love's music playing continuously as a bed under all the interviews. In an early interview with Lee in a car, this plays merry hell with his audibility: but once the mix settles down it's a stroke of genius, placing the music firmly centre stage without heavily relying on performance clips (apparently there aren't many of those around anyway). It's nicely shot, featuring excellent and informative interviews with the band and - briefly - some celebrity fans, including Primal Scream's Mani (I used to go to school with him, you know) and a couple of British MPs. There's a sheer - going for the inevitable pun - love of music that oozes out of every frame of this film, which makes it a delight to watch even if you aren't an enormous fan of the band. 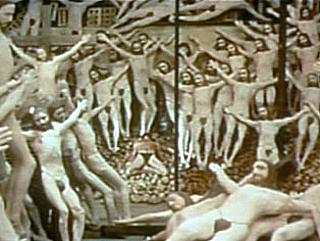 One of my earliest LFF memories was seeing Alexandro Jodorowsky introduce his 1989 film Santa Sangre, and realising I was in the presence of a full-on old-school loony director. Santa Sangre blew me away with its relentlessly surreal imagery, and it made me curious to see more: unfortunately, back then his two earlier features - El Topo and The Holy Mountain - were both lost in a quagmire of bad prints and rights issues. Both of those appear to have been resolved now, at least in the case of The Holy Mountain: hence this late-night screening of Jodorowsky's restored 1973 film prior to a re-release by Tartan FIlms.

If you're looking for a synopsis, you'll be lucky, frankly. Where Santa Sangre was an almost traditional horror story with surreal trappings, this is a barrage of wild images with only the thinnest possible strand of narrative holding them together. A Jesus looklike identified in the credits as The Thief (Horacia Salinas) is first seen lying in the desert with his face covered in flies. After a few minor adventures that include a recreation of the conquest of Mexico performed by reptiles in tiny costumes, he meets up with The Alchemist (Jodorowsky himself) who obligingly turns The Thief's shit into gold. The Alchemist sends The Thief out on a quest for the holy mountain of the title, for reasons which temporarily escape me.

Okay, I admit it, those reasons escape me because this was my fourth film of the day, and by midnight I was starting to lose it a little. Although, to be honest, I don't think The Holy Mountain could work at all while you're fully awake. This, of course, begs comparison with Container earlier in the week, but Jodorowsky wins out over Moodysson for several reasons. I didn't want to try nodding off during The Holy Mountain, as I didn't want to miss any of its beautifully shot images, even if I didn't know what half of them were supposed to be. Also, Jodorowsky's a proper surrealist who knows how to make these images cohere into some sort of vague theme, even if that theme remains tantalisingly out of reach. Plus he can be funny as hell, particularly in the gag-filled centre section where The Thief's companions on his quest are introduced.

In the end, I think Santa Sangre's a better film, because its more conventional narrative structure gives its surrealism something to fight against, and the two play off against each other beautifully. But The Holy Mountain is an astonishing experience that needs to be seen once, albeit possibly under the influence of sleep deprivation or whatever else your brain might need to cope.