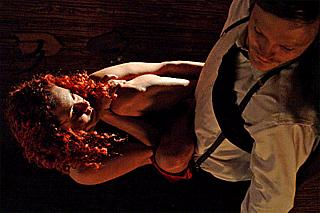 I know it's appallingly bad form to quote yourself, but I'm quite pleased with this one, so indulge me here. Half a dozen of us were eating in the River Spice restaurant before heading off to see Faust, and we were working out what we knew about the production beforehand. We knew it was a collaboration between the National Theatre and Punchdrunk Productions, the latter being a company specialising in site-specific theatre. We knew we'd been asked to go to a mysterious address in London's less-than-glittering East End for the show. We also knew that we'd be expected to walk around the location, and were free to explore it at our leisure. And we were struggling to decide how the hell that would work, until it hit me: "it's going to be an art installation with a plot, isn't it?"

And that's pretty much what Punchdrunk's Faust is. Except for, perhaps, the plot.

And to be honest, the word 'installation' barely begins to cover what's happening nightly at 21 Wapping Lane, which turns out to be an enormous disused warehouse. Punchdrunk have converted the space - all five floors of it - into the location for a fragmented take on Goethe's original. Over the space of three hours, two complete performances of the story will take place in multiple simultaneous strands, stretching across various locations inside the building. The audience's job is to work out where they need to be at any given time.

In practice, it would take a lot of both determination and luck to get a complete story out of all this, judging from my experience over one evening. Your own success may depend on how you choose to make your way round the building. Some people latch onto one particular character and follow them: others seek out the spots where most people are gathered, and assume that must be where the most important stuff is happening. For a large part of the evening, I found myself using the characters like human hyperlinks - following one into a scene, but following a different one out of it if they looked more interesting. By the end, I was deliberately walking in the opposite direction from the crowds to see if I could find things they were missing.

What you end up with is an almost random selection of visual imagery that somehow fits into the Faustian myth: and every spectator's set of images will be different. The temptation is to latch onto anything that resembles conventional performance: couples in a sleazy bar descending into depravity, a Walpurgis Night dance that's choreographed like a fifties high school prom, and a brutal male pas de deux that just might be the climax of the show (and, by chance, the only section I saw twice). As we're made to seek out the drama for ourselves, there's a creepy air of voyeurism over the proceedings: it's enhanced even more by the decision to make all the audience wear masks, making you feel like you're living in the orgy scene from Eyes Wide Shut.

But part of the delight of Faust is that the huge scale of the venue allows for dramatic changes in focus. Without too much effort, you can find yourself alone in one of the many nooks and crannies in the building. At times, you may even feel you've stumbled across a clue to the story that nobody else has - like the tape library with a secret at the back, or the interrogation room with something on the chair, or the laboratory whose floor is engraved with... Well, the stunningly designed lighting scheme throughout the entire building means that even when you do see something, you won't be entirely certain whether you really saw it or not.

Operating somewhere in the no man's land between art and performance, Faust is an extraordinary way to spend a cold dark winter's evening. Its huge ambition reminds me of the excitement that used to ripple through London whenever the Archaos circus came to town, producing enormous visual wonders purely for our amusement. But at the same time, both design and cast are focussed on ensuring that everyone gets a unique little moment of their own to take away. (For me, it was when one of the actors approached me from behind, tapped me on the shoulder, stared at me for ten seconds, said 'yes' and walked off. Please don't tell me he did that to everyone in the building, I don't think I'd be able to stand it.) If you'd like to find your own unique little moment within Faust, its original end date of November 18th has just been extended well into 2007, so book now.

Yea that's all well and good, but I think this is better http://www.youtube.com/watch?v=WpGeRgkOUCE&mode=related&search=infinite%20mind%20second%20life%20suzanne%20vega%20queen%20soldier%20public%20radio%20avatar