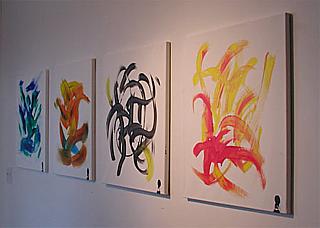 Yeah, I know, it's late, sue me you buggers. As you've probably noticed, I'm currently trying to balance the demands of a day job with the challenge of keeping the London Film Festival diary up to date: and the day job's going to have to take precedence sometimes. Getting this entry, or any other entry, up on the web for November 1st was always going to be difficult. Aside from that, it required some tricksy time management to come up with a way of watching two films in one day, and still spend roughly five hours in total travelling to and from a work assignment. Watch out for the LFF diary for November 1st to see how I pulled that off.

Other plans for November? Well, once the LFF is out of the way, nothing concrete except, er, more films. Remember the Wild Japan movie season a year or two ago? (Don't worry if you don't, there's a REPOST on the way.) Well, a follow-up season called Wild Japan: Outlaw Masters is starting at the National Film Theatre literally the day after the Festival ends. God knows what state my eyes and brain will be in once I've got through that lot, but I'll try to let you know before the end of the month. Hopefully, while still on a Japanese tip, you should also get to see the third and final piece on our Japan 2006 holiday, in which The Belated Birthday Girl covers the food and drink side of things.

In the meantime, your Simian Substitute Site for November 2006 is Cheeta, The World's Oldest Chimpanzee. Yes, that Cheeta, the one that older readers may remember from the early Tarzan movies. He's in happy retirement now, and like most retirees has taken up a hobby: painting. Bung Cheeta a few dollars for the primate sanctuary they've named after him, tell him your favourite colours, and he'll paint one of his 'ape-stracts' for you. He's been on the telly and has appeared in galleries, so you know those paintings can only grow in value.

As usual, the comment box is open below for any subject that takes your fancy: as usual, I expect you'll ignore it. Go on, prove me wrong.