Reviewed today: Bandits Of Orgosolo, The King And The Clown, Opera Jawa, Our Daily Bread. We've established by now that this week, I'm juggling the joint demands of a day job and evenings watching movies. And today was always going to be the day when work took precedence: a day trip out to a client that would mean, among other things, that I wouldn't be able to get the diary for October 31st online that day. A day trip, moreover, that would require a total of three hours travelling by train. Why, you could pretty much watch a movie in that time! Hmmm.

You may recall my disappointment on my first day of the festival, when The King And The Clown was postponed at the last minute due to subtitling problems. Those problems appear to have been resolved now, and two new screenings for the film were subsequently announced.  One of them was last Sunday at 10.30am, a timeslot that quite frankly doesn't even exist in my diary: the other clashed with the Closing Gala. But some investigation with the good people at YesAsia revealed that a Taiwanese DVD of the film could be picked up for a few quid less than the LFF ticket price. So that's what I did, and with the aid of The Belated Birthday Girl's portable DVD player (the work laptop can't play region 3s) I watched it in two lumps during my travel to and from the office.

It's a thrilling story of triumph over adversity - my watching the film on the train, I mean. Sadly, the story of The King And The Clown itself is much less satisfying. Jang-sang (Kam Woo-Seong) and Gong-gil (Lee Jun-Gi) are a pair of travelling performers in sixteenth century Korea, entertaining the crowds with their curious mixture of acrobatic stunts and filthy sexual innuendo. Gong-gil's ladyboy looks keep attracting the wrong sort of men, and Jang-sang's attempts to protect him mean the double act is frequently on the run. They decide to try their luck in Seoul, only to find that the tyrant King Yeonsan (Jeong Jin-Yeong) has turned all available land into hunting grounds and made a bit of a mess of the city. Jang-sang and Gong-gil decide to perform a new act that satirises the King: but Yeonsan, far from ordering their execution, makes them his official jesters. Because, as it slowly becomes apparent, he's the wrong sort of man as well...

The King And The Clown has broken all box office records in its native South Korea, possibly because it's one of the first Korean films to broach the topic of homosexuality: even Tony Rayns says in the programme note that it's "the film that Farewell My Concubine wanted to be." But Concubine wore its gay themes proudly on its sleeve, whereas this film's same-sex romance is so underplayed as to be virtually invisible. Gong-gil and Yeonsan's relationship is almost entirely conducted in coded dialogue, as if writer/director Lee Jun-ik is scared to let us see what's going on.

The film as a whole is a curious mixture of styles: in a way, it's an interesting throwback to the days when Asian cinema was aimed specifically at its home audience, and didn't try to softpedal its emotional extremes for the benefit of Western festivalgoers who might see it too. The story veers between gushy sentimentality and brutal violence at the drop of a hat. The dialogue (at least in the subtitles on the Taiwan DVD) are a bizarre mixture of dated olde-worlde dialect and ripe swearing: the words 'thou' and 'fuck' occur with almost equal regularity.

Sure, it all looks pretty enough, but in that generic way that Asian period dramas tend to. Unfortunately, despite all the blatant emotional manipulation at work, neither the story nor its characters can sustain your interest for the full two hours, making The King And The Clown something of a disappointment. I'm glad I only went for the cheap Taiwan DVD rather than the more expensive Korean edition, anyway. 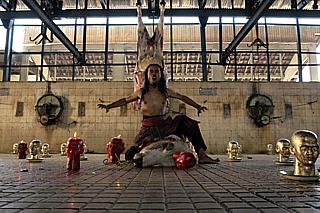 As far as I'm aware, I've not seen much Indonesian cinema before, if any: and if there's a reason for festivals like the LFF to exist, it's to expose the viewer to unfamiliar filmmaking cultures. Which seems as good a reason as any for watching Opera Jawa, a film loosely based on the old Sanskrit tale of the jealousy which disrupted the wedded bliss of King Rama and his wife Sita. Here, they're represented in modern times by the village potters Setyo (Martinus Miroto) and Siti (Artika Sari Devi). They're trying to keep their relationship together as lawlessness and uprising breaks out all around them, with the added complication that local butcher Ludiro (Eko Supriyanto) is plotting to make Siti his own wife.

It's an old, old story, but the trick is in the telling - because Opera Java, as its name suggests, is an all-singing musical film performed to a hypnotic gamelan score by Rahayu Supanggah. Possibly a little too hypnotic, given the stresses and extended travelling of the day at work I'd just had. But the music is incredibly pretty, and just one of the bewildering array of devices that director Garin Nugroho uses to keep this interesting. In the early part of the film, this takes a little getting used to: several installation artists were commissioned to provide the settings for the big musical numbers, and sometimes the huge amount of imagery being flung into your eyes feels as random as The Holy Mountain did a few days ago.

But after a while, you learn to adjust: and as you do that, the film's visual confidence grows along with the momentum of the story. The images become simpler, bolder, and more impressive: the red carpet that Ludiro rolls out for Siti, or Setyo covering his wife's body in clay in an attempt to keep her. By the climax, you can't think of it as having mere pretensions to opera: it's working on a large enough emotional scale to be the real thing. At the time I was watching it, I was worried that I wasn't quite awake enough to give it the attention it deserved: now that I've slept on it, paradoxically, I'm desperate to see it again.

The Belated Birthday Girl - I'm still in two minds about this film.  On the one hand, it does what it does incredibly well: made up of a series of shots, often with a static camera, of large-scale industrial food production, with no narration, talking-heads, text or other comment, it gives a genuine sense of the lack of humanity behind the process of getting the food we eat to us.  Filled with memorable images, often stunningly beautiful (the field of sunflowers before the crop-spraying),  awesome in scale (the salt mines, the hillsides of olive trees), quirkily humorous (the new-hatched chicks being spat out of one machine into trays), or simply disturbing (the difficult slaughter of cows).

Interspersed with these scenes of industries built on enormous high-tech machines and armies of workers carrying out repetitive, de-humanised tasks, are scenes of the lunch-breaks of the workers, juxtaposing always the production and consumption of food.  But beyond the one message of the alienation of food production from the human scale, it is difficult to see what there is to get from this as a documentary.  In a sense, everything it has to say is said by the fourth or fifth segment, although the way the scenes build up one on another does give a relentless tone to the film, echoing the relentlessness of the food industries depicted.  In some ways this feels almost more like a piece of extended filmic modern art, rather than a documentary.  But as I am in two minds, rather than being definitely against it, I'll come down on the generous side, and give this a positive recommendation.

The Belated Birthday Girl - Martin Scorsese is responsible for me seeing this film.  More specifically, his My Voyage To Italy which I saw at my very first LFF in 2001, which sparked some interest in seeing some of the directors and films he talked about.  I've been very lax about doing anything about that, though, so when this came up in this year's festival, I decided to put something right and see my first De Seta - although, in fact, My Voyage to Italy focuses more on an earlier period of Italian filmmakers, to which De Seta is maybe an heir.

The tale is simple, with a poor shepherd, barely scraping by, with debts taken out to get his herd, raising his sheep with his brother in the Sardinian hillsides around Orgosolo.  When due to some bad luck he ends up falsely suspected of involvement in the theft of some pigs and the subsequent death of a carabinieri, he goes on the run, trying to cross the mountains with his brother and his sheep.  Without giving everything away, suffice to say there is tragedy ahead.

The look of the film, shot in stunning black and white, with the beautiful but unforgiving landscape, and the worn, harassed faces of the Sardinian shepherds, is the most striking thing about the film.  The performances are all pretty dead-pan - the cast apparently non-professional, local actors - but they suit the tone of the film perfectly, and the cast are handled terrifically by De Seta, and it is hard to imagine this was his first full-length feature (although he had a background in documentaries, which probably fit him very well for this film).

Some day I will get around to seeing some of Scorsese's other recommended Italian Neo-Realists' films, but for now, Bandits of Orgosolo made a fine foray for me into the genre.