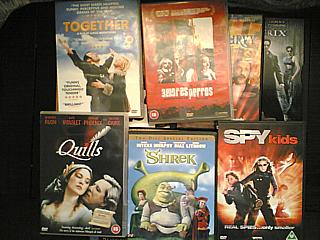 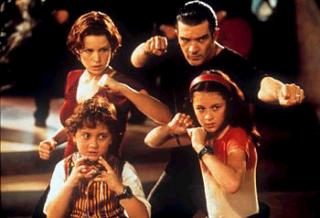 You remember VidBinge 2000. And if you don't, that's why the link's there, obviously. It's become a tradition over the festive season to invite the Pals over to the audio-visual playpen I call Spank Towers, for an all-day session in front of the telly vegging out to a selection of the best films of the year.

The selection process is notoriously messy, and is described in the VidBinge 2000 page if you're really curious. But basically, we get to watch four or five films in one day depending on the votes cast by the people who are going to attend. This year's selection was assembled from the choices of The Belated Birthday Girl, The Cineaste, Grizelda, Jon, Lee, Lesley, Nico, Rob G and SeaPea. However, there was a last-minute upset in the voting when Grizelda called in sick and said she couldn't show up. With her votes removed from the count, the four films that were originally going to be shown were still there: but there were sufficient mid-table ructions to ensure that one of the films now sharing fourth place was short enough to squeeze in alongside them, and still allow us to finish before the tubes stopped running.

Which is how at 1pm on Saturday December 15th, 2001, I revealed this set of results to the Pals, and we settled down to watch Spy Kids as our first film of the day, its trim 85 minute running time just squeezing into the programme. A good choice too, which among other things helped me decide on the DVD as a suitable choice for a Christmas present for Spank's Nephews. (But be warned that if you're a fan of the movie, there's a better looking special edition of the DVD coming in 2002, presumably to coincide with the theatrical release of Spy Kids 2.)

It seems like a crazed idea on paper, doesn't it? Robert Rodriguez - the director of loud, violent shoot-em-ups like Desperado and From Dusk Till Dawn - making a children's movie. Actually, he turns out to be a perfect choice: the story of two children having to rescue their retired spy parents from an evil supervillain has a baggy, organic feel to it, exactly the way you'd expect a father like Rodriguez to tell bedtime stories to his own kids. This is recognisably the output of one man's imagination, not botched together by a focus group.

Visually, Rodriguez continues to pull off miracles on tiny budgets (another reason to wait for the special edition DVD, as he's always been forthcoming in commentaries and documentaries about his working methods). The cast play it perfectly straight, from the domestic cool of Antonio Banderas and Carla Gugino as the parents to the kids themselves, Alexa Vega and Daryl Sabara being just annoying enough.

Best of all, he pulls off the miracle of making a funny and exciting action comedy without ever exceeding the boundaries of a U certificate (barring a couple of discreet poo and wee gags in the dialogue). There are jokes here for the adults, but they're not deliberately pitched to exclude the tinies. They'll enjoy the characters of the uncles Felix and Izzy, whereas we're amused by their being played by Cheech "Dopehead Comedy God" Marin and Danny "Professional Ratfaced Scumbag" Trejo respectively. When Rodriguez burst onto the scene nearly a decade ago with El Mariachi, who would have guessed that he'd eventually be the mastermind behind the first ever Latino family blockbuster movie franchise? Roll on Spy Kids 2, that's what I say.

With our 2.45pm screening of Shrek hot on the heels of Spy Kids, it's worth pausing to reflect that in a year where Hollywood cinema for grownups has been unspeakably shit, its kids movies are on a roll. With Harry Potter and Lord Of The Rings fighting it out in the multiplexes as I write, it's a good time to have Nephews (and a Very Small Niece rapidly approaching moviegoing age) to accompany me to this stuff.

Anyhoo, Shrek. The anti-Disney movie, notoriously, as Dreamworks boss Jeffrey Katzenberg takes the piss out of his Disney oppo Michael Eisner by creating a dwarf villain that looks like him and coming this close to naming him Lord Fuckwad. A fairytale plot that upends all the traditional cliches, making its hero an ugly green ogre. And where Spy Kids' poo and wee gags are minor digressions from the story, in some scenes here they're almost all the cast has to work with.

Having said that, I like poo and wee gags. And compared with the scripts to some of the films that it played alongside during the summer - Pearl Harbor, The Mummy Returns, Tomb Raider - this is bloody Dostoevsky. You can argue that the animation isn't as pixel perfect as the stuff Pixar are doing for Disney, but I suspect that Dreamworks don't care: they're happy to be the rougher, more streetwise player on the block, a bit like the Warner Brothers Looney Tunes to Disney's, er, Disney.

But you could also argue that there's not quite enough plot here to sustain the full 90 minutes, and that's a fair criticism: second time round, the centre section where Shrek goes on his princess-hunting quest does drag alarmingly. Still, for the most part Shrek's anarchic upending of the old tales is jolly good fun, and the only proper response is to give in and enjoy the surreal and unexpected turns of the ride. Anyone who asks why Robin Hood has got a French accent is seriously missing the point.

At 4.30pm we have Quills, our first grown-up movie of the day, and one which I reviewed back at its world premiere at the 2000 London Film Festival. "We've got the first great movie of the 21st century right here," I said at the time. Hindsight's a bitch, isn't it?

By definition, all the films on the shortlist for the VidBinges are ones I've seen already, and it's always interesting to see how many of them hold up to a second viewing. Of today's selection, Quills is the one that holds up least well. To an extent, it's the Carry On version of de Sade, with Geoffrey Rush's Marquis finding ever more inventive ways to torment his captors, notably the tyrannical Dr Royer-Collard (Michael Caine). But the lurch into tragedy that impressed me so much first time isn't really that convincing second time around. And it's still recognisably an opened-out version of Doug Wright's stage play, not having much real visual interest to speak of until the over-melodramatic finale. Still, that's the risk I run for publishing opinions the day after I see a movie. Amores Perros (our 6.45pm selection), on the other hand, just gets better and better on a second viewing. Part of this is obviously down to the tricksy narrative structure that writer Guillermo Arriaga and director Alejandro Gonzalez Inarritu have concocted for their movie.Out of a single car crash, three stories emerge, separated but at the same time intercut - the two guys making money out of dog fights who were in one car, the advertising model who was in the other one, and the tramp with a dark secret who witnessed the whole thing.

On first viewing, Amores Perros is a rollercoaster ride of a movie, where it takes a fair bit of effort to assemble the crazily intersecting timelines in your head. Second time around, you can concentrate on the stories and marvel at the three contrasting styles Inarritu brings to each. The edgy, hand-held ferocity of the dogfight scenes and the human story that surrounds them: the quiet, escalating paranoia of the middle section (think The Conversation but with dogs instead of tape recorders): and the subtle shifts in tone that define the redemptive path of the final tale.

Anyone who's spotted the obvious nods to Tarantino throughout this film should be able to work out where the final story is heading about twenty minutes into the first one: but this is much more than a mere homage to Pulp Fiction. There's an insight into human character and emotion here that Quentin was only just beginning to discover around the time of Jackie Brown. Inarritu has nailed it down cold in his first, wildly ambitious movie, and it'll be fascinating to see what he does next.

Traditionally, Vidbinges end on a downer. Last year, we climaxed with the cannibalism and family murder of Titus: the year before, it was the Dog Spunk Ingestion Incident that leaves Happiness with nowhere to go but the end credits. With these precedents, something like the full-throttle Drugs Hell of Requiem For A Dream would have been our expected closing movie. Instead, for our 9.30pm slot, the Pals overwhelmingly chose Lukas Moodysson's Together: one of the most joyously uplifting movies of 2001, and certainly one of my favourites of the past twelve months. In a room mainly filled with people who were seeing it for the first time purely on the basis of my rave review of its LFF 2000 screening, I did start to wonder if this was going to be Quills all over again.

Happily, it wasn't. This is now the third time that I've watched this bunch of Swedish hippies bungle their way through their 1970s experiment in communal living, and it never fails to delight. As ever, it's down to Moodysson's unfailing eye for character. We laugh at these people, not because they're stupid or misguided, but because they're working towards a set of ideals that they have no hope of ever attaining, and we suspect we'd be just as bad.

The performances are all pitched perfectly: but Gustav Hammarsten's turn as Goran, the peacemaker of the group, is glorious. As Alex50 pointed out in the discussion of the movie on Film Unlimited, there is no movie on earth whose ending could not be improved by having Goran walk on, shake his head smiling while saying "Lasse... Lasse..." and walk off again. His increasingly desperate attempts to see everyone's point of view simultaneously are hysterical, and make the moment when he suddenly grows a pair spectacularly funny. Together isn't a movie that'll change the world, but it'll make you think for a little while about whether you could: and that may be all we can ask for these days.

So VidBinge 2001 was all wrapped up by 11.15pm on the night. And as the Pals headed off towards a fortnight worth of Christmas parties and so on, I'm already wondering what VidBinge 2002 will look like. Will we have some of the as yet unreleased favourites from the LFF, like Mulholland Drive or Waking Life? How will this Christmas' big Oscar movies like Ali and The Shipping News fit in? How about the promised summer blockbusters like Star Wars Episode 2 and Austin Powers 3: will they be better than 2001's Planet Of The Apes? Christ, I hope so. Being a monkey, and all.