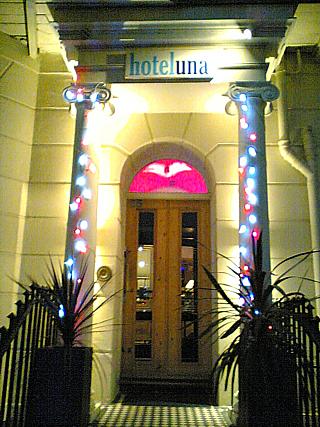 I could make this a follow-up to my earlier piece about The Belated Birthday Girl and me spending Xmas 2005 in New York, and tell you all about what it was like to spend Xmas 2006 in Brighton. I could tell you about the terrific meal we had at the restaurant in Hotel du Vin, which was unfortunately outclassed by the stunning meals we had at Due South and Terre a Terre. I could tell you how Komedia is now my new favourite cabaret venue, with a large and excellently laid out hall, great food, and (on the night we went) local legend Tina C giving her own take on the Middle East crisis: "the Road Map To Peace was always a bad idea. How many Jews do you know who don't have satellite navigation?" I could tell you how on the same street as Komedia, you could lay your hands on both cruelty-free shoes and a very tasty meat pie. I could tell you about our surprise at how many restaurants and shops were open on Christmas Day morning, and our concern over whether the Volks Electric Railway will ever open again (they say it's just closed for the winter, but it all looks a bit permanent). I could tell you about the simple pleasures of spending Boxing Day at the Sea Life Centre, which is all very informative and educational but also lets you watch turtles fuck. I could tell you about our excursion to Hove, actually, where we saw the decrepit leisure centre that's soon to be the subject of an aggressive makeover by Frank Gehry (and maybe Brad Pitt, or maybe not). I could tell you how everyone in town was getting excited about the prospect of Fatboy Slim's upcoming New Year gig, though the closest we got to it ourselves was seeing the planning permission notices. I could tell you about the moment The Belated Birthday Girl fell completely in love with Brighton, when she heard a passing small child say "Mum, can we go to Carluccio's now?"

Hotel Una, at the time we visited, had been in Brighton's Regency Square for nine months or so, just across from the smouldering remains of the West Pier. From the outside, as you can see, it looks pretty much like every other Brighton townhouse that's been converted into a hotel: but as Blanch House taught us a few years ago, external appearances can be deceptive, and that's the case here too.

As we were checking in, we were asked how we'd first heard about the hotel, and I mentioned that we'd seen it reviewed in The Guardian. The response was a confused look, which happened a few times when we mentioned it again to other staff. Because, quite frankly, that Guardian review was incredibly meh, as Sally Shalam claimed her room had 'an OK factor rather than a wow factor'. A conclusion presumably based on seeing one room out of the 24 in the hotel, all of which are decorated completely differently (as is obvious from the hotel website). It adds weight to a theory I've been working on for some time: that any Guardian writer not directly involved with news production will say any old crap that comes into their head, if they think it makes them sound interesting.

So here's another view. I don't know which room Shalam was complaining about, but we were in the Quaile, and it was terrific. Admittedly, it's one of the swankiest rooms in the joint: split across two levels, with the lounge and lav downstairs and the bedroom upstairs. The stairs are a wee bit terrifying to negotiate in the middle of the night when you need to get from the bed to the bog and back: but it's a fine suite, and the combination of bed, free-standing bathtub and 42" plasma TV in the bedroom makes for all manner of indulgence. There are little quirks all over the place that set this hotel apart from its numerous Regency Square neighbours: a hot stone massage service, a sauna and jacuzzi, and (more suited to our own personal needs) an in-house movie channel whose choices were eclectic enough to range from The Constant Gardener to Takashi Miike's Audition.

But there's one thing the Guardian got exactly right: the staff are, indeed, incredibly friendly, and they ended up pushing Hotel Una from good to great in my book. We'd booked in for the Xmas package, which included Christmas Day dinner as part of the deal. The hotel was looking a little underpopulated in the runup to Christmas, and on the day the slightly sad truth emerged: there were only two couples booked for the meal. We were discreetly given a choice: did we want a table to ourselves in the main restaurant, or did we want to join the staff for their meal at the back? The BBG and I like to think of ourselves as convivial types, so we said we'd like to join the communal table. The other couple, meanwhile, said they'd prefer to stay on their own.

Schadenfreude, unlike turkey, is a dish best served cold. One hour later, couple B were sitting alone in the restaurant quietly eating their dinner. We, on the other hand, were whooping it up with the hotel owners Zoran and Yelena, and the staff from three continents that it takes to run any decent hotel nowadays. After a beautifully cooked and fabulously boozy lunch, The BBG and I retired to our room for an hour and vegged out in front of Doctor Who - incidentally, fair play to Russell T Davies for getting an atheist creation myth onto primetime Christmas Day telly - before heading back down to the hotel bar, to find that everyone else was still carrying on. We danced like Englishmen and drank like Serbs, in honour of our hosts. And the next night, we did it all again, as we got pulled into a staff Boxing Day party that lasted till 2am the following morning.

Other hotels may have more elaborately decorated rooms, it's true: hell, the Hotel Pelirocco across the Square has a Durex-sponsored room with pole-dancing facilities if you need that sort of thing. But Hotel Una's carefully thought-out design (and when Zoran told us he was an architect, it all made perfect sense), coupled with the willingness of the staff to make us feel utterly at home, made it the perfect choice for the season. And with their plans for the future - combining some of those 'OK' rooms into larger suites, opening the restaurant up for evening meals - it can only get better. We were rather chuffed to be part of what turned out to be Hotel Una's first Christmas. It deserves to have more people there for future Christmasses. So go on, then.

Hotel Pelirocco has revamped the suite with the pole in and it's now the Lovers Lair, still with pole, round bed and mirrored ceiling!
Link here https://www.hotelpelirocco.co.uk/hp/lovers-lair/