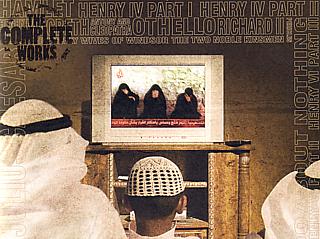 I do enjoy a good arts festival. Mind you, regular readers will probably be well aware of that, if they've seen this site's previous coverage of Edinburgh and the London Film Festival. The thing is, it's not just a way to consume art in bulk, or to see things that wouldn't normally come to your town (although both of those are certainly attractions for me): what I like most about festivals is the way that you can sometimes catch an extraordinary piece of work purely by accident.

Case in point: on the old site, I documented the events of August 20th 2002, when The Belated Birthday Girl and I spent an hour or two wandering around Edinburgh desperately trying to find a show that wasn't sold out or cancelled. We ended up at a play called The Al-Hamlet Summit purely because there was nothing else available: and it was fabulous. Zaoum Theatre Company - specifically, their lead writer/director Sulayman Al-Bassam - had taken the basic ideas behind Shakespeare's tragedy, and reworked it as a new drama set in the contemporary Middle East. A dangerous thing to be doing in the first Edinburgh Festival to be held after 9/11, particularly given the explosive finale to Al-Bassam's adaptation: but sheer nerve and theatrical invention carried it through.

And now, five years later, Sulayman Al-Bassam has returned to the UK - and to Shakespeare's birthplace, no less - to see if Richard III can stand up to the same treatment.

The Royal Shakespeare Company knows a thing or two about arts festivals, of course, and at the time of writing they're just bringing their biggest one ever to a close. The Complete Works launched in April 2006, and stretched across all of the RSC's theatres in Stratford-upon-Avon: as the name implies, all of Shakespeare's known works have been performed there over the subsequent year. We've seen a few of them (a passable Romeo And Juliet, a magnificent Antony And Cleopatra, and a visually sumptuous Japanese version of Titus Andronicus), and stayed in some rather nice B&Bs as we did it (we can particularly recommend Moonraker, Eastnor House Hotel, and Meridian Guest House). It's been an interesting experience, particularly comparing the RSC's own productions with those of visiting guest companies.

As well as the Shakespearean canon, part of the festival has been devoted to what the RSC calls The Responses: new plays derived from the original texts. Richard III: An Arab Tragedy, adapted and directed by Sulayman Al-Bassam and performed by his own company at the Swan Theatre in February 2007, falls into this category. The early publicity for this show suggested it would be a very explicit transformation: originally it was going to be titled The Baghdad Richard, and set in the 1980s in Saddam Hussein's Iraq. Under the new title, things are kept a little more generic: the programme note sets the action in 'late 20th - early 21st century AD', in 'an unnamed state in the Arabian Peninsula.' (As The Belated Birthday Girl noted, this is eerily reminiscent of that season of 24 where anyone who asked where the terrorists came from was handed a piece of paper and told 'one of these three Middle Eastern states'.)

The plot as it stands is the one we all know and love, as Richard, the Emir of Gloucester, plots to take the throne from his ailing brother Edward by any means necessary. It's performed in Arabic, with English surtitles off to the side of the stage (unlike Al-Hamlet, which was played in English throughout). It makes for an interesting experience linguistically: the unfamiliar language, including quotes from the Quran where appropriate, is translated using a mixture of original text, paraphrase and new dialogue. But on a few occasions, the surtitles create a barrier between the characters and an English-speaking audience: which is a fatal flaw in the case of Richard's first speech, where he's aiming to get our collusion in all the evil he's about to perform. Thankfully, Fayez Kazak gets over this initial hurdle, and over the course of the two hours he's as seductive as any English Richard.

Aside from the liberties taken with historical period, Al-Bassam also repeats Al-Hamlet's trick of using a layer of multimedia effects on top of the drama: only this time, with an RSC budget attached, he can be a little more ambitious. Not too much, mind - he uses video back projection for the odd newscast, and some beautifully composed shots of the stage from an overhead camera. Additionally, there's a rather fine band accompanying the proceedings on traditional instruments (plus a token white guy on keyboards). But Al-Bassam never overdoes these devices: as someone said once, the play's the thing, and all the staging is done to enhance the story and the performances, which are fine throughout. The expanded role for Queen Margaret (Amal Omran) is particularly impressive. She gets the opening scene of this version to herself, telling the audience about the coup that toppled her and her husband from power, and she spends much of the rest of the play lurking in the background, gloating as Richard's plans slowly come undone.

For those of us who've seen The Al-Hamlet Summit, it's impossible to avoid comparing it with Richard III: An Arab Tragedy. The new play didn't blow me away in the same way that Al-Hamlet did: the earlier piece completely pulled apart the plot of the original, and reassembled it into a wholly new and modern shape. Richard, by comparison, is more like your typical modern dress Shakespeare, with the odd narrative frisson generated by parallels with current events. Still, as modern dress productions go, it's very good indeed: and even though its Stratford run is now over, I'm sure it'll be touring the world for the next few years like Al-Hamlet was, so hopefully you haven't seen the last of it.

One final note relating to the Stratford production. There's a pub over the road from the Royal Shakespeare Theatre called the Black Swan (also known to the locals as the Dirty Duck), famous for being where RSC cast members hang out post-performance. I'd assumed that given the largely Muslim cast of Richard, you wouldn't catch them carousing in the pub after the show. I was wrong, though...