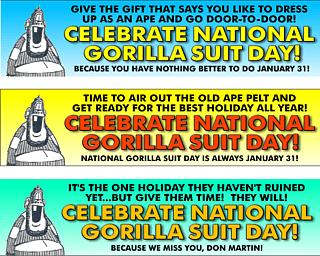 And so, we finally wave goodbye to the year 2006. Yes, I'm well aware that everyone else waved goodbye to it a month ago, but you should know how deadlines work around here by now. Yesterday, I finally managed to post up the piece on You Wouldn't Think That I Was 43, my compilation CD of the best songs of 2006. A couple of points relating to that:

1. I've had a report that the MP3 player links may not be working as well as I'd hoped. How are you finding them? Let me know in the comments section, and I'll see what I can do.

2. Don't forget about the competition on the page to win a CD - closing date March 14th.

3. Some time soon, probably tomorrow, I'll be posting up a video playlist for all the songs on the CD, like the trailer reel I had for VidBinge 2006. So actually, all that stuff at the start about me being over and done with 2006 is total lies, really.

Still, there will be new stuff in February, promise. Quite a few half-formed ideas knocking around, so I won't commit to too much just yet: but as the best TV show in the damned world returns to British television in the middle of the month, I'd imagine I'll have something to say about that. Stay tuned.

Meanwhile, the Simian Substitute Site for February 2007 is National Gorilla Suit Day. Those of you who remember Mad magazine in its prime will probably recognise the deranged art stylings of cartoonist Don Martin, and this was one of his loopier inventions: a national American holiday when everybody dresses up in gorilla suits for the day. The page in question is from Mark Evanier's site POVonline, and is basically just a bit of history on NGSD along with some tasteful web banners.

And yes, I know that if you're reading this article on the day of publication, National Gorilla Suit Day was in fact yesterday, on January 31st. So what? I'm giving you the maximum amount of time to prepare for next year's. See to it. (Mark Evanier's report on his own NGSD 2007 activities can be found here.)

Comments box open for whatever takes your fancy, as ever. Anyone? Bueller? Bueller?