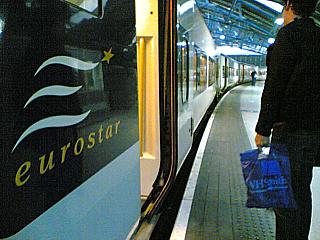 The Belated Birthday Girl and I saw An Inconvenient Truth last year, and I have to say Fat Al does seem to have a point. Having spent last summer mainly working from home - the first summer in over two decades that I'd spent in a non-air conditioned environment - I can vouch for the climate being in a right old mess right now. But one of the things that makes An Inconvenient Truth an inspiring movie is that it doesn't just proclaim gloom and doom about climate change: it ends with a list of realistic things we can actually do about it. And one of their suggestions was to try and avoid using aeroplanes for holidays.

We thought a bit about the number of long-haul flights we've done to Asia in the last five years, and realised that there was probably room for improvement right there. We therefore made a pledge as we left the cinema: no planes in 2007. Sadly, a few months later, pressure of work has forced us to revise that to read 'no planes in 2007 except for the ones we'll have to take if we want to keep our jobs': but at least we have some level of control over personal leisure flights. So we'll be telling Stelios where he can stick his easyJets for real this year, and going by train both to and from Edinburgh in the summer.

Which leaves our big two-week holiday for 2007, the one that normally involves a couple of long-haul flights to Asia. What to do? What to do? Go on, guess.

Pretty soon after the no-planes pledge came the idea for this journey - whizzing round as much of Europe as we could in a fortnight ('doing Europe like Americans do' has been my shorthand explanation at parties), only using trains for our travel. We'd spent a little time in 2006 planning a journey for a friend's wedding in Koenigswinter: and though we actually used planes to get to and from Germany, the rail connections to the town itself were a doddle to arrange over the web. With a little research, we found that through a combination of Eurostar, SNCF, Trenitalia and Die Bahn we could book seats for a circular route round half a dozen or so key cities across Europe. And, of course, the intarwub also made it easy to book hotels and the various items of cultural interest you expect from travel reports on this site.

So right now, that's what we're doing. I'm actually writing this paragraph in the Eurostar departure lounge, and once I've got a photo of our train I'll slap all this onto the site at the earliest opportunity. As each leg of this journey involves several hours of train travel from one city to the next, I'll be using some of that time to blog what we've been doing in the place we've just left, taking advantage of any wireless networks I can find along the way that can interface with my new laptop. Don't expect daily reports like you get from Edinburgh, but at least you'll hear about what we're doing within a day or so of our departure, rather than after the traditional two month delay associated with my travel articles. (If you really want real-time internet action, there are some extraordinary things happening on justin.tv as I write, involving a San Francisco man with a live webcam strapped to his head 24 hours a day. I'm grateful that we're going on holiday now, to be honest, because it was starting to become compulsive viewing.)

Anyway. We're off now. The train's just pulled out of Waterloo, and a kid sitting behind me has already asked "Mummy, are we under the Channel now?" Stay tuned.