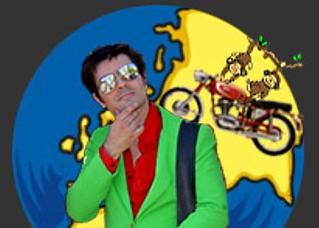 To begin with, a wee public service announcement. Just over a month ago, I published an article called You Wouldn't Think That I Was 43, describing the compilation CD of my 18 favourite songs of 2006. As usual, the article ended with a competition which offered you the chance to win a copy of the CD simply by guessing a bus number. The closing date for that competition was 23:59 GMT on March 14th, 2007.

Without giving too much away, let me say this: anyone who enters that competition within the next two weeks is probably in with a pretty good chance of winning it. I'll say no more. It's at the bottom of this page, if you're interested.

And yes, it's true, the site's been a bit quiet in the four weeks since I posted that competition. Blame it on work: either too much or not enough, both apply in this case. The situation could be unstable for a little while to come yet, but hopefully the posting frequency on the site will increase, because I've got quite a few things planned. There'll be one reposted old article, in preparation for a movie season coming up in April (in connection with that, keep an eye on this page and see how long it takes the BFI to spot the typo in the title). As for new stuff, hopefully there'll be some music, some telly, some PORN, and something rather huge kicking off at the very end of the month. Are you feeling teased? You should be. Stay tuned.

Meanwhile, the Simian Substitute Site for March 2007 is Drunken Monkey Motorcycle. It's the work of Dave Smith, who sometimes plays bass for the Sacramento Star Trek punk rock band No Kill I, and sometimes goes riding round the world on his Ducati 250cc motorbike. As you can guess, the site is mainly dedicated to the latter activity, and documents the places he's been since he started his travels in 2004. Currently he's back home preparing for the second leg of his tour, which should take in Australia, Asia and Europe. Dave's not posting much at the moment, but will doubtless ramp up production again once he's back on the road. In the meantime, he's got a hefty set of archive posts you can explore.

Comments on any old thing you like are welcome below, as ever. What happened to that guy who posted "FART JUICE. THAT MEANS U SHARTED IN YOUR PANTS." on the Boobies page? I kinda liked him.