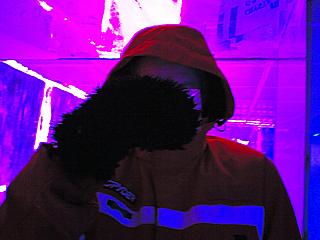 I know I started off this tour by proclaiming the greener-than-thou intentions behind it. I'm also well aware of the hideous number of contradictions involved. So here's a major one for you to start off with: at 11.30pm on Saturday night, we spent half an hour or so in the Ice Kube ice bar. It's perfectly possible that the amount of energy it takes to chill a room to sub-zero temperatures just so that a party of drunks can guzzle unlimited vodka out of glasses made from solid ice completely outweighs the energy we saved by travelling to Paris by train rather than plane. But I'll be honest, I'm not thinking about that too hard because the vodka's rather nice.

Besides, it only seems fair to visit the Ice Kube, because it's a major feature of the Kube Hotel where we're staying for three nights. Another contradiction: the hotels we'll be staying in for the next couple of weeks are all pretty much on the swanky side, and the Kube is certainly no exception to that. The Belated Birthday Girl and I were initially intrigued by the ultra-cute website for the hotel, which you really need to visit now before reading any further. Done that? Good, isn't it? (Unless you're on a dialup connection, in which case you probably want to kill everyone involved in the site's making.) Surprisingly, the various room layouts shown in the site animations are pretty much true to life: you don't get an army of spiky-haired clones dancing around on every free bit of floor space, though.

We certainly aren't going to complain about the Kube too much, particularly as a small reservation cock-up on their part resulted in us getting three nights in a junior suite for the price of a normal double room. But it has to be said that everything in your room is designed to within an inch of its life, with form rather than function as the priority. There are a number of places, particularly when it comes to the toilet facilities, where they've gone out of their way to making everything look nice, but not considered the practical implications. For example, there's a beautifully-placed magazine holder directly in front of the toilet for your reading convenience, whose functionality is completely negated by the light being one of those ones that turns itself off after twenty seconds if you don't wave your arms around underneath the ceiling-mounted motion sensor. Also, one of the two toilet rolls supplied is black, and that's just unnatural. And ladies: think about all the sanitary disposal bags you've ever used, and see if you can come up with one good reason why transparent ones would be a good design strategy.

One more design flaw for the list: the idea of each room having fingerprint access rather than a key is another one that is better in theory than in practice. The Belated Birthday Girl's finger refused to scan properly for the whole time we were there, coming up with a 'Not Exist!' error message that sent her into a deep existential crisis for the whole weekend. But to be honest, these are all minor niggles. The Kube is a stylish and very cool place, with incredibly friendly staff for a place so trendy-looking. And aside from the ice bar, there's also a fine bar lounge with good cocktails at night and a solid breakfast buffet in the morning. 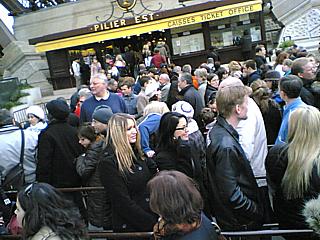 Food's a priority on a trip to Paris, of course. To quickly run through a few of the meals we had during our weekend there: Au Pied Du Cochon is a rather good brasserie that's open 24 hours a day just across from Les Halles. As the name implies, their signature dishes tend to involve some of the more unpleasant parts of a pig, but fish eaters like The BBG are also well catered for (though pure vegetarians might have trouble there). It's a friendly place mentioned in most of the tourist guides: the staff are patient enough to cope with your fumbling attempts at ordering in French, and may even give you a tasty amuse-bouche as a prize. Alcazar is a Conran restaurant which we chose as our location for Sunday brunch. The BBG found it a little too anonymous and not French enough, though little touches like a resident Shiatsu masseur and a killer chocolate pudding eventually swung her around. To be honest, she was happier in Le Petit Machon close to the Louvre, providing Lyonnais cuisine in a more traditionally cosy Parisian environment.

One other meal we had that I've not mentioned above: ham baguette and chips in the cafe on level 2 of the Eiffel Tower. All my previous visits to Paris have been day trips, and this was the first time I've actually spent a couple of consecutive days in the city. As a result, my main priority was to fit in a couple of activities that a day trip doesn't normally allow for, and an ascent of the tower is one of those. Particularly on a Saturday afternoon when the schools have just broken up for Easter, when one of the four lifts from the ground level is closed for refurbishment. We ended up queuing for something like an hour and a half just to get to the ticket desk, with more queuing to follow for the lift to the very top: but the view makes it all worth while. One useful technical tip: you won't be allowed past the initial security check (after approximately one hour's queuing) if you're carrying any glass containers which could be dropped from a great height onto passing Parisians. So don't try to sneak any jars or bottles pass them, and - speaking from personal experience - don't queue in front of two whiny old English bags who'll complain for the rest of the queue about how their mate had to stay behind with his marmalade.

Part of the joy of Paris is just wandering around seeing the sights and the people. Even though the weather on Saturday was a bit ropey, the streets were thronged, particularly with noisy Lyonnais fans on their way to Stade de France for the big cup game. (I'm assuming they were a bit less noisy after the match.) But when the sun came out on the Sunday, things got even busier. We took a leaf out of the Lonely Planet Best Of Paris guide, and combined two of their recommended walks - one round the Left Bank, another round the Marais - into a lengthy and enjoyable ramble around arrondisements 1-5. It was particularly nice to stroll around L'Ile Saint-Louis and see huge queues outside every ice cream parlour, and then enter the Jewish quarter and find exactly the same length queues outside the falafel stands. And as you'd expect, we'd got some French cultural activities lined up for the weekend. Well, sort of. You can understand why the French are so protective of their artistic achievements, and why they can get annoyed at the way American culture has become so pervasive. Which makes it all the funnier that the Folies Bergere is currently playing host to a long-running production of the Broadway musical Cabaret. It's actually a recreation of the Sam Mendes production that was such a huge hit in both the West End and Broadway in the nineties. The difference here is that, inevitably, the whole thing's been translated into French. Well, not the whole thing, obviously - a song like Wilkommen, Bienvenue, Welcome would lose some of its impact if it became Bienvenue, Bienvenue, Bienvenue. But the lyrics and the book are pretty much all in French, which makes for an interesting experience for English speakers like myself struggling to remember highlights from a French O Level taken nearly 30 years ago. Thankfully, memories of the film and stage production make it easy enough to follow.

It has to be said, performing Cabaret in a place like the Folies Bergere is a stroke of genius. Part of the appeal comes from the musical playing off the inherited decadence of its surroundings - I seem to recall the equivalent New York production went for the same effect by taking over Studio 54. But the fact remains that the building is designed for this sort of entertainment anyway. The front section of the auditorium (where we were sitting) has been transformed into the Kit Kat Klub itself, with the audience seated at small tables rather than in rows. It's a smart touch that means you get intimately acquainted with the naughty ladies dancing at the front of the stage, as you marvel at just how little clothing a woman can wear and still be able to hide a radio mic transmitter. As for the principals, they're all fine, and the two key roles are played to perfection: Fabien Richard's Emcee is engagingly sleazy, while Claire Perot's Sally Bowles manages to pull off both the vulnerability of the early scenes and the spine-chilling sheer psychosis of the title song at the end.

Don't worry, we saw some proper home-grown stuff as well. One of the aims of this tour is to try to catch at least one local movie in every country, regardless of how well we speak the language or not. This being the holiday season, and French moviegoers being more like the rest of the world than they'd care to admit, fluffy comedies are the order of the day right now: UGC Cine Cite Les Halles had an enormous queue for the new La Tete De Maman on Sunday night. But the cop drama is another fine French tradition, and with a newish one Contre-Enquête in the screen next door we thought it'd be worth a shot - after all, we'd at least get some violence, part of the universal language of cinema.

In fact, Contre-Enquête was a bit more wordy and psychological than we expected. Not a problem, though: at its heart is a traditional genre plot that's straightforward enough to follow at the basic level even when missing out on some of the key details, while the added level of uncertainty about everyone's motivation makes the psychology that bit more interesting. Richard Malinowski (Jean Dujardin) is a cop who becomes personally affected by a murder - one which, incidentally, crosses a line that Hollywood generally steers well clear of. It's a high-profile case, and the call from the top brass is to close the case quickly. Daniel Eckmann (Laurent Lucas) is caught, charged and imprisoned with admirable speed - perhaps too much speed. From prison, he writes to Malinowski protesting his innocence, and the cop begins to suspect that they may indeed have got the wrong man.

Writer-director Franck Mancuso paces the story beautifully, wrapping it all up in a neat 85 minutes, which is pretty much all it needs. A good choice for my first ever film in a French cinema, although it freaks me out a little that an all-ages film like this was accompanied by the rather explicit trailer for Nos Amis Les Terriens, featuring scenes of actual X-ray hardcore shagging. Well, that's France for you.