Home Archives/Categories About Me RSS Feed Mailing List Email
REPOST: This Is Radio Spank (or at least it used to be)
Heroic Grace 2: Kung Fu Boogaloo 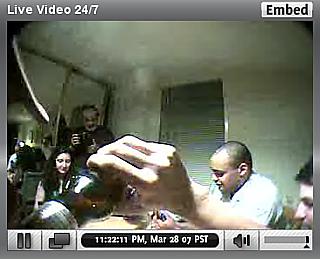 The Belated Birthday Girl's main objection to justin.tv is that it's the philosophy behind reality TV taken to its ultimate extreme: one person's life presented as entertainment, regardless of whether it's actually worth watching or not. And I'd agree with that as an objection if the key purpose of the site was to showcase Justin's life. But it isn't, not really, despite its subject's claim that "I started justin.tv because I thought it would be awesome for people to see what it was like to be Justin." In fact, its main function is to showcase the technology that allows him to run a mobile video stream 24/7. (For the record, it's all done with a backpack laptop and wireless cards.)

The long-term plan is for Justin and his team to sell this equipment to anyone requiring video streaming with this level of flexibility and robustness. And for me, the site is most interesting as a demo of those capabilities. In the two months it's been running so far, the video feed has developed from its wobbly beginnings (when it was the luck of the draw whether you could connect to it or not), to a reliably solid stream with an integrated search allowing you to browse through all the video recorded so far. (That reliability's actually taken a dive in the last day or two, but we'll get back to that.)

Nevertheless, it's impossible to separate the technical implications of what Justin is doing from the philosophical ones. I've been visiting the site randomly over the last two months, and it's been fun watching the nature of the content change. At the start, there were many laughs to be had as Justin was repeatedly thrown out of places who didn't want their business broadcast live over the web. As his project gathered more and more mainstream media attention, that inevitably changed: for most of April, Justin was appearing on the guest list of one West Coast event after another, as people realised that they could get some publicity from him. In a way it became almost unbearably meta, as virtually everything that we saw Justin do was related to the site we were watching it on.

It's now two months since justin.tv started - which is impressive, as I was convinced it'd burn itself out in a matter of days - and things appear to have settled down a bit. Nobody seems to particularly care any more about Justin turning up wearing the camera: on a plane journey to an LA tech show, he even managed to broadcast all the way through SFO airport security (including a shot from inside the X-ray scanner) and onto the plane before he turned off the transmitter. There are still events on the calendar where he's a guest of honour, but not as many as there were a month ago. And you start to get the feeling that the team are racking up the soap opera element to keep people watching - their hiring and firing of staff, a notice of eviction from their apartment and so on.

Apart from that, there's still a queasy voyeuristic thrill to be had from following someone around all day like this. Part of that thrill comes from waiting to see what happens during the more sensitive periods in his day. What happens when he goes to sleep? He takes the camera off and leaves it by his bed so we can see him lying in till mid-morning, like your typical New Media Waster. Toilet breaks? They tend to remain point-of-view affairs (so we get to stare at Justin's towel rack for five to ten minutes), but with the sound helpfully muted. Cash machines? The camera is tilted up through 45 degrees so you can't peek at his PIN. Sex? Well, apparently he's getting some (that opening month was notable for geek groupie interest), but I've never been around when it's happened, and rumour has it those are the few occasions where the camera's turned off completely.

In the last couple of days, the justin.tv site has undergone a makeover. It's a bad move - the video feed is a heavy load on an underspecced PC at the best of times, but the pile of chat boxes and RSS feed windows now surrounding it has actually crashed my browser a couple of times. The search facility currently appears to be more of a random scene selector (otherwise I'd be linking to some of the best bits in the archive here), and is made more irritating by the facility allowing users to post up their own links to their favourite bits. And the users are the worst thing about the site: the chat window (which used to be closable, but isn't any more) is a continuous stream of twat soup from people who haven't got the faintest idea what's going on, and think they're somehow communicating with the guy they can see on screen.

Obviously the site is a continuous work in progress, and things may well change, but right now it's a bit of a mess. One useful feature still remains unchanged, though, and that's the ability to take the main item of interest - Justin's video feed - and stream it onto your own website. So I admit it: the only reason I'm reporting on justin.tv now is that it gives me a chance to put Spank's justin.tv Page That Doesn't Have Any Of That Other Web 2.0 Bollocks Cluttering It Up on my site. It's mainly for my benefit, but you can use it as well if you like. Because it's interesting.

(Well, you were pretty much inviting that)