Home Archives/Categories About Me RSS Feed Mailing List Email
Europe By Train: Amsterdam
REPOST: This Is Radio Spank (or at least it used to be) 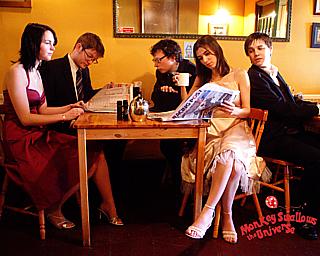 So, to sum up: at least two major new pieces planned on the site for May, but it depends on how quickly I can get my work/life balance sorted out after this latest reshuffle. Sorry to those of you who are waiting for new and exciting content, but there you go. Have you seen that Die Hard music video yet? It might keep you occupied for a few minutes.

In the meantime, the Simian Substitute Site for May 2007 is the official site for Monkey Swallows The Universe, a five-piece acoustic pop band from Sheffield. The last time I mentioned a Sheffield monkey-themed band in these pages, it was this lot back in November 2005, about thirty minutes after everyone else on the planet had discovered them. MSTU probably won't make it to that sort of level of fame, even though new single Little Polveir was recently The Sun's joint single of the week. Still, it's pretty enough, and you can watch out for their second album The Casket Letters later this year.

Anyway: work to do, videos to edit, Bruce Lee films to re-assess. Talk amongst yourselves while you wait. (See box below.)

So I returned to the Monkey Swallows The Universe site to see if they'd been talking about me. They hadn't, but I found out that they're playing a support slot at the Spitz in London on Saturday June 9th... http://www.mstu.co.uk/gigs.html

...which is all well and good, then someone on their forum said that it's a gig that's worth going to... http://mstu.proboards77.com/index.cgi?board=general&action=display&thread=1179141226

...because the Spitz has been given notice to quit by the end of September and needs our support. http://www.spitz.co.uk/save_the_spitz.htm

Which is rather terrible news, in my book. The Spitz is one of East London's best small music venues, and it'd be a crime to lose it. The Save The Spitz page has a petition you can sign as well as a donation form: if you care about the state of live music in London, please follow the link. And catch some bands there, while you're at it.

ORANJESTAD, Aruba - Felix rapidly strengthened into a dangerous Category 5 hurricane and churned through the Caribbean Sea on a path toward Central America, where forecasters said it could make landfall as “potentially catastrophic” storm.
Felix was packing winds of up to 165 mph as it headed west, according to the U.S. National Hurricane Center. It was projected to skirt Honduras’ coastline on Tuesday before slamming into Belize on Wednesday.
“As it stands, we’re still thinking that it will be a potentially catastrophic system in the early portions of this week, Tuesday evening, possibly affecting Honduras and then toward the coast of Belize,” said Dave Roberts, a hurricane specialist at the center in Miami.