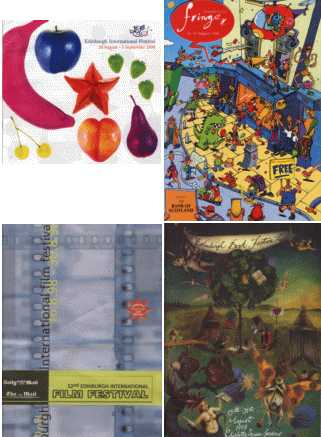 Originally posted on The Unpleasant Lair Of Spank The Monkey 30/08/1998. Yes, you're going to get all the rest of them in time for our 2007 Festival coverage, don't worry.

So here's the deal. I was going up to Edinburgh with eleven other people (nine of them sharing student accommodation with me, two making other arrangements). We would be there for a week at the height of Edinburgh Festival season: we'd timed it carefully to catch the highbrow delights of the main International Festival, the eclectic weirdness of the Fringe, assorted new and classic movies in the Film Festival, and the chance to schmooze with famous authors at the Book Festival. We were planning to see as many shows as humanly possible, and still leave enough time to get blind drunk in the gaps in between. And at some point each morning, I was going to drag my hungover unshaven carcass into the nearest cybercafe, type up a review of the previous day's events, and post it up on the Web for you ungrateful buggers. What were my chances of ever managing to pull that off?

Well, here's your chance to find out. Aided and abetted by Spank's pals - Liz, Rob D, Ken, Sylvia, Rob G, Jon, Old Lag, Christine, Nick, Lesley and Rachael - what follows is a day-by-day journal of a week in Edinburgh, August 22nd to 29th 1998. Join us if you dare.

Go-Edinburgh is a single site which links to all Edinburgh's festival websites: not just the Big Four that happen during August, but also the Science Festival, the Jazz and Blues Festival and many others.

Edinburgh Festival Fringe does a sterling job of organising the 10,000+ shows of the Fringe into an easy-to-search database.

Edinburgh International Film Festival took a ludicrously long time to get their site ready, but now it's there it's got all the programme details you could hope for.

Edinburgh Book Festival looks nice and covers everything that the paper programme does.

Festival Revue [dead link] is a newish site using lots of RealVideo streaming to give you a flavour of what's going on in Edinburgh right this minute, for those of you who can't be there.

Inside Out is a Scottish webzine primarily dedicated to film. Mentioned here because they managed to get details of the Film Festival up before the official site (with more coverage promised during the Festival itself), and they provided me with some useful technical info. Thanks to them.

Web 13 [dead link] and Cyberia [dead link] are Edinburgh's two major cybercafes, without whom the daily updates to this page would never have seen the light of FTP. Thanks to them too.

Napier University provided the accommodation for Spank and his pals during their week in Edinburgh, thanks to their dirt cheap letting of student self-catering flats during the summer vacation. You haven't got a hope in hell of getting in there now, but you may be able to book a flat for the '99 Festival.

Re: August 23rd - So that story you told me about Vinnie Jones wasn't made up then (although when I initially heard it from you, he was leaning over your shoulders in the cinema seat behind you and Ken).