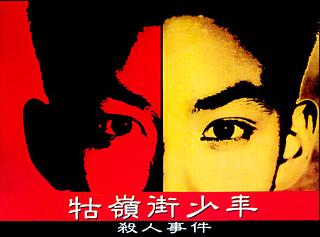 An early caption sets the scene - it's Taipei in the summer of 1960, and we're following a group of teenagers through one of those After That Summer Things Would Never Be The Same Again scenarios. In particular, we're looking at the children of the mainland Chinese who fled to Taiwan in 1949 after the Communist uprising: so aside from the usual teenage alienation, they also have to cope with feeling like outsiders in the country they currently call home. Many of them form street gangs to generate some sort of sense of belonging: petty thieving and gang fights are pretty much the norm.

Si'r (played by Chang Chen, a decade before he found worldwide fame in Crouching Tiger, Hidden Dragon) is a typical example. Only three things give him any sort of respite from the trouble he's continually getting into at school. His friends' obsession with Western rock 'n' roll music (their flawed transcription of an Elvis song explains the title): hanging around the local film studios: and cultivating his crush on local girl Ming (Lisa Yang). Unfortunately, Ming's already tied up with Honey (Lin Hongming), another gang member who's currently on the run. Inevitably, Honey's return takes the powderkeg atmosphere of the town and pours petrol all over it.

This isn't the ideal way to watch the film, of course. VCD always has sub-par image quality when compared against DVD, but this particular one looks so ropey you almost expect the dodgy camera view to be spoiled by the one person who really needed the loo. Not to mention the Chinese and English subtitles that look like they were hand-stencilled onto the print. But somehow Yang's quiet, understated style manages to come through even in these reduced circumstances.

He captures the random cruelty of adolescence beautifully - your own teenage rivalries may not have escalated the way they do here, but the petty grudges and sudden switches of allegiance feel desperately familiar. Chen's performance is especially noteworthy, capturing Si'r's growing confusion as he realises he doesn't really understand people at all - his enemies changing their point of view as they mature, his friends moving on without him, his family having their own problems. The tension is beautifully built with lots of long, static takes - but when violence eventually breaks out, Yang denies the viewer the satisfaction of release, shooting those scenes from a distance (apart from one notable exception) and refusing to make them look like anything other than an ugly brawl.

The extended running time isn't a problem (which is surprising now that I've just re-read my review of Yi Yi, which I complained at the time was pushing it a bit at three hours). Actually, one of the few advantages of the VCD format is that the film's split across four discs: sure, the breaks are all in wonky places, but it helps you think of the film as a four hour, four episode miniseries. Yang's pacing in the extended cut is remarkable: I particularly liked the tragedy that comes roughly halfway through the story, and the way the film takes a metaphorical deep breath before carrying on - a quiet three-to-four minute montage showing people slowly getting their lives back together again. (And the lack of music - apart from the rock 'n' roll tunes played on screen - makes it feel all the more real.)

The pictures may be fuzzy, but the performances of the young cast are all superb, and the four hours simply fly by. So it's positively criminal that rights problems are currently preventing anyone from seeing this, unless they bought the VCD back at the turn of the century like I did. Yi Yi has recently had a fine re-release on DVD courtesy of Criterion, and it'd be lovely if the company could do a similar job on A Brighter Summer Day. The film deserves it: so does Edward Yang.

If it's all right with you, I'm going to pretend that I know nothing about the lead times needed to produce a national daily newspaper, so I can assume that my publishing the above article on July 17th shamed the Guardian into printing an obituary of Edward Yang on July 18th.