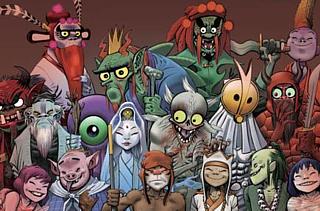 Monkey: Journey To The West is based on an ancient Chinese folk legend, one that most Brits of a certain age will remember from the TV show Monkey. Two Brits in particular certainly remember it: Blur frontman Damon Albarn, and Tank Girl comic artist Jamie Hewlett. For the last few years they've worked in close collaboration on the Gorillaz cartoon band project, with Albarn providing the music and Hewlett providing the unique visual style. And now, in collaboration with director Chen Shi-Zheng, they've ramped up their aspirations even further and produced a full-length opera.

The story should be familiar to anyone who remembers the TV show (or, for that matter, any of the countless other adaptations before this one). The curiously feminine monk Tripitaka has been ordered to travel from China to India, in order to bring back the Buddhist scriptures and thus achieve enlightenment for China. Buddha has personally assembled a team of travelling companions for Tripitaka - Monkey, Pigsy and Sandy, all of whom are seeking redemption for one reason or another. In Monkey's case, he's personally disrespected Buddha (though sadly the notorious 'pissing on Buddha's fingers' incident hasn't made it into this version), so he needs a bit more redemption than most. Still, his fighting skills make him useful as a protector for Tripitaka, and are frankly the main reason why we all watched the show back in the eighties.

On paper, Chen Shi-Zheng's production looks like the most ludicrously over-the-top idea on the planet. A pop star writing his first opera: a cartoonist providing all the designs, as well as linking animation sequences: and a whole army of acrobats, contortionists and martial artists working like fury to add texture to the story and its four main protagonists. How can it all possibly come together?

Well, it's not like there isn't a precedent here. Monkey is being billed as an opera, which may lead some viewers to expect something in the Western opera tradition. But this is closer to the experience of traditional Peking Opera than anything else I've seen outside of Beijing. The costumes and makeup, the garish design, the gymnastic combat sequences: it's all here, just done on a much, much larger scale, and Hewlett's distinctive design sense is what holds it all together. The use of acrobatics within the plot is especially impressive: I've seen several Western theatre productions which have tried to integrate circus elements into a dramatic framework, but this is the first one I've seen where it actually works. This is probably because they're building on an existing tradition, rather than trying to create a new one by nailing two incompatible forms of theatre together.

Plus, of course, we have Albarn's score, which works just fine. He's obviously relishing the freedom to try anything, and he does: from traditional oriental percussion, to Steve Reich style minimalism. (In a recent Imagine documentary on BBC1, Albarn described how he'd developed a series of mathematical processes to score some of the more complex sections.) Interspersed with the more experimental parts of his score are a couple of full-on production numbers that show he still has a way with a tune: more in the pastoral vein of Hong Kong than the bluster of Song 2, but still recognisably his work. And again, even though you'd expect all these musical forms would clash horribly with each other, it all fits together as a piece.

The sheer ambition of the production means you can overlook its few minor flaws. The main one that everyone talks about is the use of subtitles - they're projected at the bottom of the stage just above the orchestra pit, and thus end up being partially unreadable no matter where you sit. And because the production achieves a cinematic level of slickness for almost the whole of its two hours, you really notice when the occasional scene transition takes a little longer than is comfortable. But for the rest of the time, Monkey simply roars along like a huge entertainment machine. And Fei Yang's performance in the lead is a huge part of that, thanks to his sheer sense of fun and - possibly as a nod to the location - Bez-style lolloping around the stage. In the great tradition of Chinese opera, every so often the principals will freeze in a heroic tableau: and when that happens, Monkey will always be the one undercutting it by scratching his balls.

With more people on wires than a Gerry Anderson production - there's a lot of flying, not to mention one scene with a lot of swimming - plus people tumbling and juggling and fighting like crazy, plus the tunes, plus the story, plus the retina-frying visuals, this is more action than your brain can possibly take in: but it'll love you for it afterwards. At the time of writing, the Manchester run of Monkey had just finished - the next stage in the production's journey is a trip to Paris in September 2007, and who can say where it'll go after that? I suppose they'll eventually have to bring it down south, to hush up all the Londoners whingeing about how Manchester managed to get a world premiere of this scale. But to be honest, what I'd love to see most is how a Chinese audience would react to it...

Next port of call: Berlin Staatsoper in July 2008. See the official site for details.

I loved the "Journey to the west" movie! They played it all the time on Hallmark.
But I'm ashamed to say that I didn't read the true story, or ever watched the tv show you were talking about.