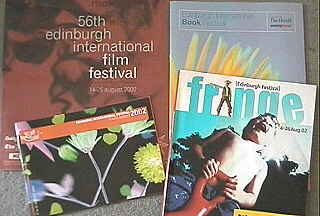 Yes, Spank's Pals are returning to Edinburgh for the week, during the peak of its Festival frenzy. The International Festival that started it all, still struggling to persuade people that it's quite good really. The Fringe, whose anarchic spirit has come to symbolise what most people think this Festival means. The Film Festival, sneakily stealing the thunder of its London counterpart, with premieres of the best movies from around the world. And the Book Festival, quietly continuing to impress with the wide range of authors it attracts.

They're all going full throttle this week. And so are we, as we once again struggle against our hangovers to bring you day-by-day coverage of what's hot and what's not. Watch this space.

Napier University are once again responsible for keeping Spank's Pals off the streets at night, thanks to their fabulously cheap Vacation Letting Service, which lets out self-catering student flats in primo locations for not all that much money. You need to book early, though: if you miss out, the Scottish Tourist Board can usually work wonders even at short notice. As far as transportation goes, this year we've forsaken the delights of Great North Eastern Railways and decided to fly up with easyJet instead. A speedier alternative, or a further source of comedy material? Time will tell.

edinburgh-festivals.com, with help this year from The Scotsman, provides you with a one-stop shop for all your Festival needs. You get links to the official sites of the Film Festival, Fringe Festival, Book Festival and International Festival, with programme details and online booking facilities where available. There are also links to reviews from all the main Scottish papers to help you make up your mind.

iofilm (formerly known as Inside Out) is a splendid Scottish arts webzine that particuarly comes into its own during the Festival season. You'll find the best coverage of the Film Festival here, no matter what anyone else tells you.

Fringe4Free [dead link] will send text message Fringe reviews to your mobile on a daily basis, providing you're the sort of brain-frazzled tumour-thumbed functional illiterate who can only concentrate on 160 letters at a time.

Film Unlimited, the most intelligent film community on the web (it says here), have been discussing their 2002 visit to Edinburgh [dead link] on their talkboard for close on a year now - in fact, pretty much since they came back from last year's visit [dead link]. They'll presumably be telling you what they think about the stuff they see, too.

The Assembly Rooms, the Pleasance and the Gilded Balloon will exert their usual stranglehold over the media coverage of the Fringe, and if you're not careful you may get the impression they're the only venues around. Is the Traverse Theatre big enough now to go on that list? Maybe, but their reputation as the best Fringe theatre is still second to none, and they're already stirring up the shit with new plays like Stitching.

Web 13 [dead link] continues to be the Official Internet Cafe Of Spank's Edinburgh Diary 2002 - bollocks to easyEverything. (If they can't supply a PC with a floppy drive, I'm not interested.) I'll be the one sleeping face down in a keyboard there most mornings over the next week.