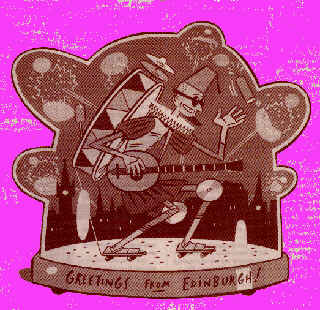 So, this'll be the first Edinburgh for a lot of you. Hard to believe that when the idea was casually floated [dead link] on the FU talkboards all those months ago, we'd end up with fifteen or so of you all preparing to travel to the Festival. Even if it is only for three or four days.

Of course, Spank's Pals - hardened Edinburgh veterans all - would consider a mere three day visit to be wussiness of the highest order. As ever, we're looking to do a whole week. This year's party consists of five of the London branch (Christine, Lesley, Rob D, Nick and meself) and three from the West Country (Charmian, Eve and Michele), with a cameo appearance from fan favourite Old Lag for a few days as well. We've all done this before - see the reports for the 1998 and 1999 Festivals - and doubtless you're looking to us to give you the benefit of our experience. 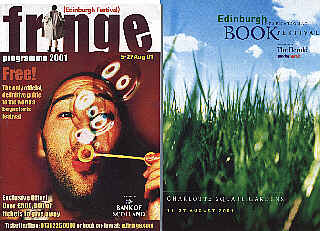 Accommodation is always an issue in Edinburgh (unless you're blessed, like Old Lag, with the ability to sleep on kitchen floors). Early booking is essential: the later you leave it, the further out of town you'll end up. Which is a pity, as Edinburgh's a rather nice city to walk around, so living close to where the action is is always preferable. As ever, Spank's Pals are taking advantage of the hospitality of Napier University: their Vacation Letting Service allows you to rent four-person self-catering flats for a week for a ludicrously reasonable sum. Other accommodation services are, of course, available: the Scottish Tourist Board will be happy to help.

Once you're there, what do you see? Obviously, as Film Unlimited types, you're all kinda focussed on the Film Festival, catching previews of new movies and presentations of old favourites (including a rather spiffy collection of Werner Herzog documentaries this year). But why limit yourselves? There's the Fringe Festival, a vast array of comedy, drama, dance, music and wholly unclassifiable stuff of sensationally variable quality. There's the Book Festival, where authors from all over come to read and discuss their work, and even sign it for you if you're lucky. And there's the International Festival that started it all in the first place, although between you and me that's kind of vanished up its own arse recently. Check them all out.

How you find out what's available is another matter. Your first port of call (aside from the official sites linked to above, and the all encompassing edinburghfestivals.co.uk) should be the hard copy programmes of the four festivals. Be prepared to carry them everywhere you go, as you'll be using them all the time: by the end of the week they'll be as ragged as xxxx xxxx xxxxx x xxxxx xxxx xxx Hamiltons (deleted on legal advice). Most venues will have the Guardian's Daily Guide available for free, which sorts all the events for the next day into chronological order: it's an unbelievably useful planning tool when you're stuck in town with a few hours to kill and need to know what's on right now.

But of course, listings are no guarantee of quality. Especially here. Get hold of as many reviews as you can to get a feel for what's hot or not. In fact, start doing that before you get to Edinburgh, so you can pick up on the hits early and book before they sell out. The Scotsman is traditionally the most comprehensive source of reviews (paper or web), though the quality of them is as notoriously unreliable as that of the shows themselves. Another good local publication is The List, the Edinburgh/Glasgow listings magazine, whose Festival coverage is solid but curiously unavailable on the web. Also check out broadsheets like The Guardian (natch), any freesheet review papers that you may find on the streets (the titles change from year to year), and the Inside Out site for particularly fine coverage of the Film Festival.

Don't just trust journalists, of course: find out what real people think as well. You'll be spending a fair bit of time queueing for tickets or shows, sitting in pubs and cafes, or just walking the streets: listen to what people are talking about, even butt into their conversations if you feel brave enough.This city lives Festival, and the buzz is audible: listen to it. Hell, even talk to those performers who are handing out fliers in the street: they probably won't be used to the attention, and you may both learn something.

Once you've made your choice, you'll have to buy tickets. You'll soon get a feel for which shows are selling fast and will require advance booking rather than paying on the door. The trick is only to book early for the stuff you absolutely have to see, and fill in the gaps nearer the day: that way you can be a bit more flexible when last-minute opportunities come along. Take advantage of online and phone booking where you can: as for the Fringe, a useful tip is to avoid the humongous queues at the Fringe Box Office by visiting the satellite box offices at Waterstones (George Street) or HMV (Princes Street). Note that it pays to be anal when planning your day: keep a diary of everything you're booking for, noting the start time and (more importantly) the end time of everything you see to avoid ugly scheduling clashes, bearing in mind some of these times can be flexible or just plain wrong.

You'll soon discover that all the big Fringe shows are centred around three key venues: the Assembly, the Pleasance and the Gilded Balloon. All well and good - I'll be at all of them a few times during the week - but the danger comes in thinking that's all the Fringe has to offer. There are over 100 other venues out there, with as much talent but much smaller publicity budgets. Your Fringe Karma goes up a couple of notches every time you see a show at a venue outside the Big Three, so be sure to find out what they're offering.

Having told you to avoid Big Name Venues, here's the exception to that rule: the Traverse Theatre is the best known straight theatre venue on the Fringe, and with good reason. Go there. Early reports (and a couple of Fringe First [dead link] awards for Gagarin Way and Wiping My Mother's Arse) indicate it'll be their best Fringe for years.

And finally, get some balance in there. Some people will go mental and see seven or eight shows in one day without bothering about lesser matters like food. (That'll be me, then. Except for the occasional Tunnock's Caramel Wafer at Web 13 [dead link], the Official Internet Cafe Of Spank's Edinburgh Diary 2001.) Others find the temptation of a near-24-hour drinking environment too good to pass up, until they pass out. The trick is to, you know, do a sensible amount of both. And maybe sleep a bit as well.

But of course, sleep could be tricky given my usual timetable. Because on top of everything else, I'll be providing daily reports on the best of the fest, with (hopefully) the odd interruption from the Pals. So there's one more source of reviews for you FU Festival Virgins to consider. Watch this space.

Looks down at knee.

We asked the Pals: as grizzled old Edinburgh veterans, what one piece of advice would you offer to someone who's going there for the first time this year?

Rob D: 1. Leave at least one day free from festival stuff to give you time to see Edinburgh, or Glasgow or the Pentland Hills, like I haven't done this year.
2. Drink lots of beer.

Nick: 'Don't Panic' would be the best advice I could give anyone going to the festival. There will be those moments when you are convinced anything any good has already sold out, but chat to people in ticket queues and bars and you will soon discover those little gems that make festival going such a great experience.

Old Lag: I think the two indispensible items for Edinburgh (apart from a bed, alcohol and fish and chips) are a mobile phone and a moped. You get to see a lot more without wearing yourself out on the hills!