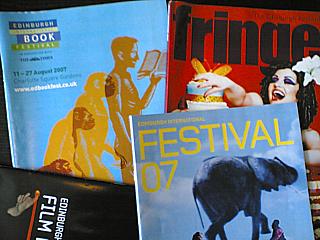 I've known it since 1989, but I've been saying this to you every year since 1998 (barring breaks in 2000, 2003 and 2006 when I did other stuff): Edinburgh in August is the artistic equivalent of the perfect storm. Four independent events - the highbrow International Festival, the anarchic Fringe, the internationally renowned Film Festival and the increasingly popular Book Festival - end up generating a kind of cultural synergy. Even though the four festivals barely talk to each other, the simple fact that they're happening in the same place at the same time automatically enhances the reputation of them all. It's such a winning combination, it's hard to imagine anyone who'd want to change it.

Now imagine the committee of the Edinburgh International Film Festival, who've decided that next year they're going to start holding their festival in June rather than August.

It's been interesting following the press reaction to this announcement - it's been generally accepted that this will be a good thing to do. Which is interesting, because everyone I've talked to personally is convinced that the decision to move the EIFF to June has been made by mad people on drugs. I'm loving this poll currently running on the Scotsman site, asking if the move is a good idea and only giving three possible responses: yes, no difference, or "no, the other festivals will suffer without it." Um, isn't there a fourth option missing from that list? There's a substantial number of people who attend Edinburgh in August for all its festivals, relishing the chance to pick and choose from the full range of media. If three of those festivals are going to be in August from now on, and one of them will be in June, then I'm afraid you're only going to see me there in August: and I'm pretty sure I'm not the only one. Journalists may think this is a great idea, but to the rest of us it makes no sense whatsoever.

Or at least, that's what I thought until I read an article by the new EIFF artistic director, Hannah McGill, on the Guardian website. She refuses to accept that other people may consider the move a bad idea, and is full of the possibilities that a June festival will offer: "It will [...] provide greater space for the kind of events (conferences, meetings, international delegations, etc) that will build up our significance within the industry and that simply cannot be accommodated in August." And there's the rub - the EIFF doesn't care about the passing trade it picks up from the other festivals: it possibly doesn't even care about the general public at all. It wants to be an industry circle jerk, rather than the celebration of film as an art that made John Huston describe it as 'the only film festival worth a damn'.

Obviously, part of this rant is fuelled by the fact that the move to June will prevent me from attending the EIFF in the future. But I'm also concerned that nobody's considered the damage this will cause to the festival. I don't care how much market research they've done, it's surely obvious to anyone with eyes that part of the reason why the EIFF is so highly regarded is because it's part of the mass of festivals in town in August, not despite it. It's certainly why it gets so much press: the world's arts reporters are already there. Move it to June, and it becomes just another provincial film festival like Cambridge. No disrespect to Cambridge, but good as it is, it's operating on a much lower level than the Venices and Canneses that Edinburgh wants to be ranked alongside. Speaking of which: one other consequence of rescheduling to June is that it won't be able to pick up the UK premieres of the best films from Cannes, which was always one of Edinburgh's selling points. But then again, once it becomes an industry festival, the assumption will be that everyone there will have already been to Cannes, so where's the problem?

I admit, grudgingly, that with a supreme effort and a lot of hard work, the newly-decoupled EIFF could thrive, flourish, and eventually become an acclaimed festival in its own right, without the inherited glory of its International, Fringe and Book relatives. But it'll have to do it without me. So, as I said at the start, this'll probably be the last time I do one of these introductions raving about how a group of Spank's Pals are coming to Edinburgh for a week to hit four of the world's best arts festivals. Because the next time we come to town, there'll only be three of them.

(The festivals, not the Pals, of course. For your information, this year's grizzled old-timers are Charmian, Diane, Eve, Lesley, Linda, Nick, Old Lag, The Belated Birthday Girl and yours truly: the fresh-faced newcomers who don't quite realise yet what they've let themselves in for are Llyris, Rhian, Stephen, Tomas, and LFF fan favourite The Cineaste. We're here from August 18th to 25th, and we'll be posting every day about anything we think may be of interest. Watch this space.)

"Speaking of which: one other consequence of rescheduling to June is that it won't be able to pick up the UK premieres of the best films from Cannes, which was always one of Edinburgh's selling points."

What makes you say that? Cannes is in May, and it's entirely possible that they could pick up some of the film from Cannes.

And as for Cambridge - yes, it is just a little festival, but this move to June is going to make their (already hard) life even harder still.

Variety suggested there'd be a problem with picking up films from Cannes, in their report on the move: http://tinyurl.com/2r4jf3