REPOST: Edinburgh Festival 2006: How Does The Monkey Know? 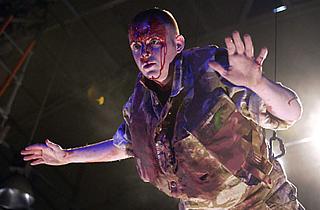 Originally posted here on 29/08/2006, but reposted to put it in chronological order after the 1998-2005 Festival reports. Coverage of the 2007 Edinburgh Festival will follow shortly. Stay tuned.

From my original introduction: "Regular readers will have noticed that I haven't been doing my Edinburgh Festival coverage this year. Very regular readers won't be surprised by that, as they'll know that I take time off from attending the Festival once every three years to do other things (more about that soon). Spank's Pal Nick, however, feels no need to take such a break, so this summer he was up there with Charmian, Eve and Diane. Here's his report."

How does the monkey know? If you had to pick a year to miss Edinburgh, 2006 was the year to do just that. None of the much touted theatre shows (Midnight Cowboy, Talk Radio and Levelland) amounted to much, and the only theatre show that did sell out was Black Watch (pictured), a show about a former Scottish regiment that had received five star reviews in every newspaper and was the top recommendation in every listings magazine: it was always going to do well on its home patch in Scotland.

The week did not get off to a good start. When making our traditional Sunday lunchtime visit to Mervyn Stutter's Pick of the Fringe, the show that advertises itself as the only show of its type to include serious theatre, this time failed to include any serious theatre.  In fact of the six acts on the bill, I had previously seen the full length shows of three of the acts: and of the other three acts, only Josie Long, an imaginative and original comedian, looked promising. I would have gone to see her full length show had it not fallen in the difficult G&T slot (anytime between 18.00-20.00!). So it was one of those rare Mervyn Stutter shows, where none of us went to see any of the full length shows he had on the bill.

So what happened to serious theatre this year? In previous years there has always been a certain buzz about a few productions and one or two star names, but this year there were no star names and little buzz. After rumours one of the stars of Brokeback Mountain was going to appear in Midnight Cowboy [dead link] proved groundless, the biggest star name in the theatre listings appeared to be Rich Hall the comic, staring in his own play Levelland, which was a noble attempt to do something different, but panned by the critics. If site specific theatre had generated all the buzz last year, it was unaccountably nowhere to be seen this year, and to top it all, a newly formed association of venue owners were bleating biliously about the lack of international promotion of the fringe. Well, to borrow a well used football cliché, they should try setting out their stalls to attract the bigger audiences into the large new venues they have opened in recent years - of these, the Udder Belly in Bristo Square was probably the best.

So what did we like? A lot of the old favourites; La Clique, Shakespeare for Breakfast, Rich Hall, Andy Parsons and a few hidden gems; Taylor Mac (NY performance artist), Starship Pinafore (a G&S spoof) and the always reliable American High School Theatre Festival doing Return To The Forbidden Planet. If you had come to Edinburgh this year solely for the shows I think you would have been disappointed, but of course I went for the excellent Deuchars in the Brass Monkey, the Ossian in the Filmhouse bar and the G&Ts in the Point Hotel along with the great company of the two muses and MissB. We had a great time, but hope to see our favourite monkey next year.

Wow this is spooky. I mean I didn't go to Edinburgh or anything, BUT I saw the film FESTIVAL (which is actually about and based during the Edinburgh Festival)on Channel 4 on Sunday night.

What are the chances of that ?

Festival was namechecked at the start of last year's Edinburgh coverage: http://www.gleeson0.demon.co.uk/ed05.htm

Hopefully the sight of Stephen Mangan's engorged member didn't traumatise you too much.