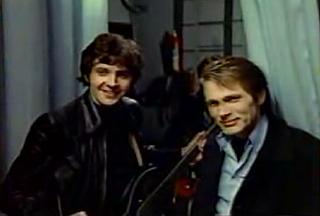 Even at the age of ten - when I was spending Tuesday lunchtimes with one ear clamped to a transistor radio, scribbling down the newly-announced singles chart so I could be first with the news back at school - even then, I could tell there was something odd about David Essex. He was, obviously, mere teenage girl fodder: you could tell from all the coverage he was getting in Popswop. But his records didn't sound like anyone else's. Take another listen to Rock On, a song with so much space in it that the TV show this clip came from had to blank out the screen to represent some of it. Part of this was down to Jeff Wayne's uniquely minimalist production, of course, but it was still obvious that Essex himself was willing to take bigger risks than most of his contemporaries.

One of those risks was appearing in two grown-up films at the height of his career - That'll Be The Day in 1973, and its sequel Stardust in 1974. Their original AA certificates would have stopped a lot of his younger fans seeing them: they certainly stopped me, as I only got to see them on telly years later, and finally at the cinema in a recent BFI Southbank revival. (The rest of you can buy the DVD from the link at the bottom of the page, of course.)

As I was too young to see That'll Be The Day when it first came out, my awareness of it would have come solely from the TV advert for its accompanying soundtrack album ("featuring 40 smash hits, from Ronco!"). From that evidence, I'd assumed that David Essex would be playing a young lad redeemed by the healing power of 1950s rock 'n' roll. But it wasn't until I actually saw the film years later that I realised what a twat his character was, both before and after that redemption.

Jim Maclaine (Essex) has his childhood trauma neatly out of the way by the end of the pre-credits sequence: a father who came home from the war, hung around for a little while, and then left again out of a vague sense of dissatisfaction. Several years later, on the day of his exams, Jim follows in his dad's footsteps - literally chucking his schoolbooks away, and going off to find himself. This being the fifties rather than the sixties, the process of finding himself doesn't take place on a kibbutz or in the luggage compartment of a cross-Europe train, but at the British seaside: first as a deckchair attendant, then at a holiday camp, and finally working on a fairground with his sleazy mate Mike (Ringo Starr). Despite all the opportunities for cack-handed casual sex the job gives him, Jim still struggles to work out his true purpose in life.

It's not really giving anything away to reveal that rock 'n' roll ultimately proves to be Jim's calling: but Ray Connolly's script is carefully constructed to ensure that even the final triumphant freezeframe is rendered utterly hollow by our knowledge of all the people Jim has betrayed or abandoned to get to that point. Essex doesn't entirely convince in the early stages of the film - he's just that little bit too posh to be a working class boy made good - but he must have something, because you can't take your eyes off Jim even in his most reprehensible moments. Eventually, it becomes apparent that far from being a Ronco-soundtracked nostalgiafest, the film owes more to the cycle of British working class anti-heroes that started in the fifties with Look Back In Anger.

This is heavy stuff for a teen idol pop star to pull off, even one with a few years on stage in Godspell under his belt: but Essex does it well, assisted by a fine supporting cast packed with familiar faces from both the past and the future. Billy Fury and Keith Moon ham it up just enough in the holiday camp rock band (Moon almost unbalances the sequel when he's allowed to do a little too much improvisation): while Ringo Starr works terrifically within his limitations as an actor, even though he's battling against your reaction of 'bugger me, it's Ringo Starr' every time he walks into shot. Of the proper actors, there's a brief appearance from a young Sue Holderness (Marlene from Only Fools And Horses), and a more substantial one from Robert Lindsay as Terry, Jim's old schoolmate. (There's an amusing pre-Citizen Smith irony in Jim's reaction to Terry growing a goatee at university - "oi, Fidel, when's the revolution?")

1973 wasn't a time when British cinema was noted for its visual style, so it's nice to see that TBTD looks rather fine on a big screen. Aside from some overly finicky period detail, Claude Whitham directs with careful restraint and a sharp eye for a beautiful image, particularly in the fairground scenes. The look reflects the warmth and colour of Jim's aspirations, rather than the grubby reality where he actually lives. By contrast, the look of Stardust, the sequel made one year later, is more obviously big-budget - partly a consequence of having the more experienced Michael Apted directing. There are huge production numbers, epic helicopter shots, and large-scale concert sequences (though sadly Apted can't quite manage to stop the audience at a 1964 concert from looking like 1974 teenagers).

Stardust starts a couple of years after the end of TBTD (on the night of the Kennedy assassination), and follows the rise and fall of Jim's music career over several years. Fairground buddy Mike is now the road manager for Jim's band, and his key role is to fire any members with ideas above their station and replace them with more malleable drones. For some reason Best known to himself, Ringo Starr felt uncomfortable with that aspect of the character, so in this film Mike's played by Adam Faith: and hooray for that, because he's a much better actor, giving what's probably the best performance in the two films. He'd already proven himself on TV as a Jack-the-lad character in Budgie: this film gives him the chance to develop that persona further, as he makes the simple question "fancy a drink?" seem like the most ominous thing in the world.

To be honest, for all its surface gloss, Stardust's rags-to-riches-to-rags tale doesn't do anything we haven't seen before: I haven't given you much detail of the plot of the film, but you could probably take a reasonable guess at the main story beats for yourself. As the story moves closer to the present day of 1974, and Jim moves into his decadent period, the movie degenerates into heavy-handed satire - please, God, let Jim's Cantata For All Women On The Planet Especially My Mum be satire... By the final scenes (impressively staged as they are), what started in the previous film as a gentle slice-of-life has completely lost touch with reality.

Nevertheless, the performances and script make Stardust a worthy successor to TBTD, even if it does lose it badly at the end. The music business may work very differently today, but these two films still work as an Open University course on how not to be a pop star. And if you don't believe me, look at how David Essex turned out. Nowadays, he's targeting his music directly at the people who were buying it over thirty years ago, using his website to sell CDs without a middle man, and making a pretty penny from regular tours. He turned sixty a couple of weeks ago, and appears to have kept a career going for over three decades without going nuts and spunking away all his cash on buying LSD for dogs. Maybe these are educational films after all.

Wow I had forgotten all about these two films, so a nice a little trip down memory lane.

I have to say straight up for both films I always found David Essex to be a pretentious actor with the weirdest cockney accent I have ever heard. Never the less they both stand up on their own merits despite Essex and thanks to Mike (no not me Dummy).

A quote I am lifting from years back described Ringo as 'lovingly recreating the (Butlins Redcoat) character he was in the Fifties' (i.e pre Beatles, pre Rory Storm and The Hurricanes). I for one would find no reason to argue with that. Similarly Adam Faith was the star of Stardust (although for me the definitive Adam Faith was not this or the series Budgie, but rather the film McVicar). The main failing in Stardust being Essex's poncey French girlfriend, and the dodgy food he fed to Faith's dog.

Also worth noting that at the time I thought these were two of the raunchiest films I had ever seen (yes that's right even more sexy than Up Pompei).

If you want to see the definitive Essex performance however, you have to go for SILVER DREAM RACER.