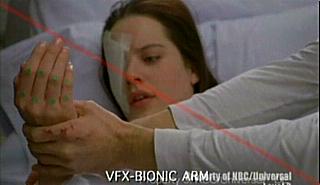 "Why is this happening again?" asks John Connor during the pilot of The Sarah Connor Chronicles. Writer Josh Friedman must have balls of steel to keep that line in the final draft, because there really isn't any reason why this should be happening again. Let's quickly recap the story so far, shall we? In 1997, a sentient computer triggers off a war between machines and man, which is eventually won by man in 2029 thanks to a resistance movement led by John Connor. Not wishing to admit they're beat, the machines send a series of Terminator robots back in time to retroactively destroy Connor: firstly targeting his mother Sarah in 1984, and then going for him directly as a young boy in 1991. You may remember the movies. You may even remember that at the end of Terminator 2, we saw the destruction of the Skynet computer before it achieved sentience: thus creating an exquisite closed time loop in which the first two films never happened at all. However, the people involved with this show would prefer that you forgot that.

TSCC begins in 1999, after the events of T2. Following the carnage at Skynet, Sarah Connor (Lena Headey) and John (Thomas Dekker) are on the run across America, with FBI agent James Ellison (Richard T Jones) in hot pursuit. In New Mexico, John settles into a new school, and even makes a new friend, the curiously detached Cameron (Summer Glau). But it isn't that long before John's past catches up with him: and as Arnie obviously isn't having anything to do with this, we have to make do with Owain Yeoman playing a Happy Shopper Terminator crashing through his school and blasting everything in sight. (Which is why the pilot's currently being rewritten: shortly after the first version was completed, Virginia Tech made the combination of school and firearms uncool again. It makes you wonder why anyone even tries to address the subject of high school shootings in American fiction, when there's almost inevitably another one round the corner which will result in that fiction getting suppressed.)

Following the big end-of-act-two reveal - and it'll probably be spoiled by the time you see it, but why should I be the one? - the story turns into a standard chase, one in which nobody needs to explain anything because they've done it all before. Cameron tells John and Sarah that we're headed for another apocalypse in 2011: which means that most of the rest of the pilot is spent on a gargantuan retcon to help get over the fact that there was a Terminator 3 film which nobody liked very much. The sheer effort it takes to erase the third movie from the franchise timeline is exhausting to watch, and frankly a little bit dull.

None of this effort helps with the main problem: it's just telly. At least Summer Glau seems to be having fun (and yes, Cameron, very amusing), but all the other cast members feel like lower-budget versions of the original movie characters, down to Owain Yeoman's terrible Ahnold accent. The action is half-hearted, the emotional family scenes fail to ring true, and there's an almost total absence of humour - the one actual funny bit (involving the inappropriate use of a cameraphone) turns out only to be there to set up the plot for subsequent episodes. And there's no real sense of an arc at this stage: this just feels like the first in a series of 22 chases. Still, at least it's not as bad as the Robocop TV show, whose lead character was reduced to shooting the legs off furniture to make it fall on bad guys, because he couldn't kill anyone.

The Sarah Connor Chronicles isn't due to appear on Fox TV till early 2008 (keep an eye on Virgin 1 in the UK). Meanwhile, Bionic Woman premieres on NBC any day now (September 26th), with the usual torrents to follow before it eventually shows up on ITV2. Yes, I did say Bionic Woman: it's true, there are officially no new ideas any more. Our heroine is still called Jaime Sommers (Michelle Ryan), tending bar by night and looking after deaf sister Becca (Mae Whitman) by day. (Becca's deafness is apparently being written out of the reshot pilot, as she's considered annoying enough without a disability.) Her boyfriend Will (Chris Bowers) is a college lecturer specialising in biology and stuff, which makes it handy when a truck crashes into their car at high speed. Jaime ends up losing both legs, an arm, an ear and an eye in the crash, but Will can - yes! - rebuild her. ($50 million nowadays, in case you were wondering.)

Unlike TSCC, the version of this pilot that's been flying around torrentspace all summer wasn't anywhere near ready for primetime. Aside from the reshoots of Becca, there are some lousy bits of post-sync dubbing, and huge holes where the (surprisingly sparse) effects should be - see the picture above for an example. But even in this unfinished state, it's interesting to see how the show's developing a harder edge compared with its seventies version. Jaime's enhancement isn't seen as a universally good thing: she's allowed to feel some concern over what's been done to her without her consent, especially when she starts to discover more about the organisation that Will's a part of. Not to mention the shady conspiracy plot which explains why she was in the crash in the first place.

And that's one of the key things that makes Bionic Woman's pilot a better one - there's a sense of something bigger than what's in this initial episode, a sense that there's a long-term game plan in place. Laeta Kalogridis and Jason Smilovic's script doesn't explain everything straight off, but still manages to get a satisfying standalone story out of their climactic reveal (which, amusingly, is almost identical to TSCC's end-of-act-two reveal). They even manage to get a couple of quotable lines in there, like Jaime's "how can you protect me when you're scared of me?" Michael Dinner does a fine unfussy job directing it: maybe because, unlike David Nutter on TSCC, we're not subliminally measuring him against James Cameron.

That's the thing when we compare The Sarah Connor Chronicles and Bionic Woman: the former is based on a Hollywood movie, the latter on an old TV show. No matter what they do, TSCC is doomed to always feel like a smaller version of its original source, while Bionic Woman can't help but feel like a bigger-budget upgrade. Even without those preconceptions, Bionic Woman looks more like it'll be the one to survive: there seems to be a bigger plan involved, rather than just an attempt to revive a dormant franchise. But let's not forget, these are pilots - it's early days yet.