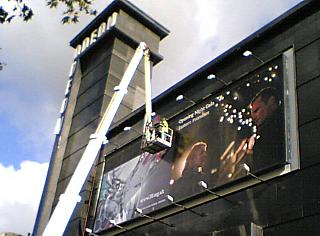 Yes, it's true, this will be the tenth consecutive year that I've reported on the London Film Festival for you. (And it's my nineteenth festival overall, since you ask. Maybe for the twentieth one next year, I'll crack open the diary I managed to keep throughout 1989 and show you what my reviewing skills were like back then. Don't take that as a firm promise, though.)

The basic format will be the same as previous years: I'll see a couple of films every day between now and the end date of November 1st, and will attempt to crank out reviews of those films the morning after. You should also hopefully get to hear from a number of Spank's Pals, who'll be reporting on additional films I haven't managed to see, or disagreeing wildly with me about films that I have seen (no names mentioned...).

What's changed for 2007? Well, I can stop dropping coy little messages to the person on the LFF staff who used to subscribe to this site, as she's moved on elsewhere. But it's nice to see that my main complaint from last year was noted, and that the cheap matinee voucher scheme has been reinstated. Hooray! It would seem churlish to mention that the vouchers have gone up in price from £5.50 to £7 since 2005, so I'll keep quiet about that for now.

Mind you, there have been other problems with booking tickets this year. The time between the release of the programme and the opening of postal booking was extended by two days, which gave us a bit more time to pick films: but shortly after we got our orders in, a series of post strikes knocked ticket distribution for six. Most of our tickets are still loitering somewhere in the postal system as the festival starts, and LFF staff have had to frantically print loads of duplicate tickets at the box office.

Despite getting in our applications within the postal booking deadline, we've not been able to get any tickets for the biggest films in this year's festival. So, no Opening Gala tonight, no Closing Gala on November 1st, and none of the interesting ones in between. Are they allocating more and more tickets to corporates and freezing us normal punters out? Not for me to say, really. But no biggie, since all of the Gala films will be released in the UK in the near future - and when they are, the tickets won't cost between £15 and £25 like they do in the festival. Besides, the lack of Galas opens up the field for more unexpected discoveries.

One word of caution: due to work commitments, the daily updates on this site may not appear with the military precision you've come to expect in previous years, particularly during the first week. But that aside, I'm hoping to catch movies both big and small, from far and wide, and tell you all about them here as soon as I can. Watch this space.