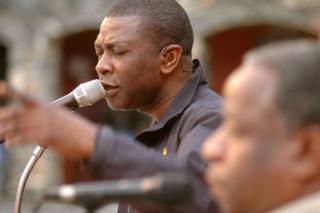 A Funny Thing Happened To Me On The Way To The Theatre #1: when I arrive at BFI Southbank to get my ticket for this film, the whole place is in security lockdown. Every visitor is being thoroughly searched and their bags are being scanned: not just when they enter, but when they move from one wing of the building to the other. This makes for a few amusing conflicts between the punters and the security staff, and all the latter will say is that some VIPs are expected. It eventually turns out that Charles and Camilla have been paying BFI Southbank a visit, including a stint in the Mediatheque. Maybe they got the idea from here. But I digress.

It's ironic that Youssou N'Dour, the subject of this documentary, can't be here with the film owing to some passport-related unpleasantness in Paris. Transport from his home in Senegal was, sadly, a much less complex affair in the old days - particularly from the island of Goree, which was the main staging post for slaves before they were shipped to Europe and America. Working with the theory that the slaves took African music with them and adapted it to fit their new surroundings, N'Dour takes a trip to America with arranger Moncef Genoud. They look at the African influences within music from places like Atlanta, New Orleans and New York, and gather up musicians as they go. Then, after a final stop in Luxembourg to pick up a couple more soloists, the newly-formed band goes back to Goree for a final concert, in which Genoud's jazz stylings combine with N'Dour's Senegalese melodies and re-imported American rhythms.

Pierre-Yves Borgeaud's film is fascinating for anyone who enjoys the clash of cultures on an artistic level. And it's only a clash at an artistic level - the one time there's the slightest amount of tension is when N'Dour objects to some Atlanta gospel singers taking one of his songs and adding the word 'Jesus' to the end of every line in the chorus. But for the most part, he achieves his aim of showing the direct line that exists between, say, a group of percussionists in Dakar and one in New Orleans. It's interesting to note that N'Dour takes a back seat in a lot of the proceedings: he's happy to act more as a catalyst, bringing all these diverse traditions together to see how good a noise they can make.

The result is a very enjoyable film, with great music - though the big surprise is how little we see of the final concert. Borgeaud's interest, we discover right at the end, is more in the journey than the destination: as he says in the subsequent Q&A, it's not a film about the making of a cultural product, because the film itself is the product. And there are plenty of lovely moments along the way, including some touching scenes when the American musicians get to see Africa for the first time. 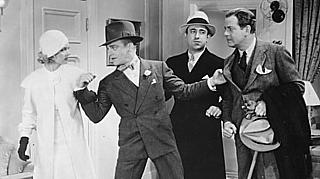 A Funny Thing Happened To Me On The Way To The Theatre #2: walking to the loos just by NFT2, I see a familiar-looking ginger head just in front of me in the foyer. Without breaking step, I crane my neck around to try to catch his face, and it turns out my suspicions are correct: it's the Irish comedian and star of Michael Collins, Owen O'Neill. Pleased with my celeb-spotting abilities, I turn my head back to the task in hand, only to discover that I've accidentally walked into the ladies. But I digress.

"Intolerable Cruelty was excellent, what's the matter with you?" asked Suze yesterday. Well, here's my problem with it. The film sets itself up as the Coen Brothers' take on the screwball comedies of the thirties and forties: and as such, there are certain things you expect, which the film never delivers. (Which is a surprise, because a lot of their earlier The Hudsucker Proxy gets it just right.) The main thing Intolerable Cruelty fails to deliver is pace: the sheer rat-a-tat velocity of dialogue and jokes, the rapid transition from one scene to the next, the refusal to include anything that doesn't move the story right along. The Coens' film frequently slows down to establish a mood or develop the characters, and who needs that noise?

Jimmy The Gent is a 1934 Warner Brothers movie that shows you exactly how it should be done. It hits the ground running with a rapid montage of rich people fatally crashing their planes, boats and cars, interwoven with newspaper headlines reporting on how none of them left any known heirs. That's where Jimmy Corrigan (James Cagney) comes in: he'll help you pick up an unclaimed inheritance, providing you give him his cut. His main rival in business is Charles Willingham (Alan Dinehart), who runs a much classier operation with magazines for visitors and frequent breaks for jasmine tea. Corrigan is inspired by this to improve his own image, mainly to impress Willingham's assistant Joan Martin (Bette Davis). But at the same time, he's also trying to pull off a complex scam involving three people and two weddings.

Showing in an utterly flawless print - huzzah! for the Library Of Congress, who've kept the original negative in a special fridge all this time - Jimmy The Gent is a delight from start to finish, and a large part of that is down to the start and finish only being 67 minutes apart. Director Michael Curtiz of Casablanca fame takes the full-length stage play this is based on, whittles it down to the bare bones, and has everyone play it as fast as humanly possible.

Having James Cagney as your lead helps, of course: he's on the edge of a total flameout for much of the picture, and his sheer energy and volume carries the whole thing along. Davis and the supporting players all do excellent work, but it's Cagney's baby. Plus, as this was just before the Hays Code came in and spoiled everybody's fun, there are some admirably cheeky gags that sneak under the wire. ("They tell me you're an absolute prince, Mr Corrigan." "You sure they said prince?") 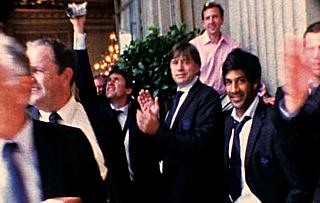 A Funny Thing Happened To Me On The Way To The Theatre #3: Mike Leigh and his missus end up sitting two rows directly in front of us for this screening. Mind you, anyone who's spent any time at the London Film Festival in the past will know that this isn't news. Leigh is a major fan of the Festival (he even directed the trailer they used for a couple of years back in the early nineties), and can be regularly spotted in the audience at films. Only on Saturday, we saw him at both The Bitter Tea Of General Yen and Son Of Rambow, and had high hopes of him turning up for Planet Terror later that day. But I digress.

In England, we had Theo Walcott: in France, they had Vikash Dhorasoo. The inexperienced Walcott was notorious for travelling with the England World Cup squad in 2006 and never once getting to kick a ball (though The Belated Birthday Girl insists that he's got much better since). Dhorasoo was on the French squad for the tournament, and though he saw a little action, for the most part he stayed on the bench. Not that he was bored, though: his friend, the director Fred Poulet, had given him a Super 8 camera and a digital audio recorder, and asked him to document his time at the World Cup Finals. Substitute is the result (not to be confused with The Substitute, as discussed by Suze yesterday).

In the same way that Zidane: A 21st Century Portrait was a film about football mainly notable for the absence of footballing action, Substitute has a curious void at its centre. For the most part, Dhorasoo is forbidden to use his camera at team training sessions or at matches, so his footage tends to be of moments of solitude: wandering around hotel corridors, reading in his bedroom, chatting on the phone to Poulet. As the tournament progresses and he spends less and less time actually playing, his mood gets appreciably darker.

Given the use of Super 8 as a medium, you may suspect that this is more of a piece of conceptual art than a formal documentary, and you'd be right. But irritatingly, it's one of those pieces of conceptual art that only really makes sense in the post-screening Q&A: there's not enough in the film on its own to justify our interest. Poulet's choice of silent Super 8, in particular, is what separates this from your traditional video diary: the way the camera works means that you can't just turn it on and leave it running for hours like you could with video, every shot you take has to be a conscious decision. Dhorasoo is basically forced into putting some thought into the film he's making, and it shows.

The other interesting thing that comes out of the Q&A is Poulet's revelation that contrary to the evidence of the film, Dhorasoo wasn't all that isolated from the rest of the squad: he hung out with them and did all the usual fun team things you would expect. It was Poulet's choice to cut all that out of the finished movie to create a better story, one in which Dhorasoo was out on his own and barely in contact with his teammates. Which may be morally dubious, but pays off when we get the best shot of the movie, the one time we see Dhorasoo and the rest of the French squad together from a once-in-a-lifetime perspective.

Substitute isn't dull - it's barely longer than Jimmy The Gent was, and certainly has curiosity value. But if it gets released more widely, it really needs Fred Poulet to travel everywhere with it for it to make sense.

Returning to Intolerable Cruelty, I wasn't aware that it was meant to be a homage to screwball comedies of the Thirties. I feel somewhat stupid now, as I just enjoyed it on its own level. That said any film that features a hitman with an inhaler, and a CEO that subscribes to a magazine called 'Living Without Intestines' can't be all bad.