If Smudge The Cat is reading this, she's probably having a right old chuckle at the section heading. Because eleven years ago, we saw Steve Buscemi give a Guardian Interview off the back of his directorial debut, Trees Lounge. And he was terrible: rambling, incoherent and utterly uninformative. I mentioned this to The Belated Birthday Girl a couple of years ago, as a warning just before we watched a Buscemi DVD commentary for one of the episodes of The Sopranos he directed. Inevitably, he wasn't much better on that. And yet we still booked for this event.

Anyway, it looks like he's had some practice at talking about his work in the interim, because this evening is perfectly fine, though some of the details in the early biographical section feel a little familiar to those of us who saw him at the 1996 festival. In his career in he's taken on several roles - actor, director, writer, producer - though when pushed for a job description, he goes with "I see myself as a tree." His initial break in showbiz was as a stand-up comic, a job he gave up when he realised he couldn't find his own unique voice. Curiously, given my history with him, he thinks the stand-up experience has helped him more in situations like this interview than with his acting work.

Buscemi's worked with a lot of great directors over the years, and he's happy to give them all credit. The Coen brothers gave him his scene-stealing role in Miller's Crossing purely because he could say the dialogue faster than anyone else they'd auditioned, and he's appeared in their films several times since. But Buscemi says he's enjoyed working with Alexandre Rockwell the most, as the director who's given him more responsibility as an actor than anyone else. For In The Soup, where Buscemi played a struggling filmmaker, Rockwell even got him to make the character's short film that we see briefly on screen.

Since then, Buscemi's career as a director has progressed to four features, all of which have played at the LFF. He wrote Trees Lounge primarily as a piece that he could act in with his friends, and only ended up directing it by default, with a crew that was a little bit worried because he'd played a terrible film director in Living In Oblivion the previous year. Once he'd realised he'd picked up a couple of the bad habits he'd always been annoyed by in directors he'd worked with (notably forgetting to talk to the actors), he tried to avoid them, and enjoys the job a lot more as a result.

His current film Interview (which has the hell reviewed out of it at the bottom of this page) is the first time he's been involved in the writing process since that debut, adapting the script of Theo van Gogh's original. As a scriptwriter, he enjoys creating dialogue but finds structure difficult, so having a structure already in place made this easier for him. As with all the other jobs he's undertaken, he's happy to acknowledge the help of his major influences: in this case John Cassavetes, who taught him that "it's okay to get into trouble as a writer... you don't have to know how your script's going to end when you start it." On the whole, then, a wide-ranging and enjoyable interview, and Buscemi only gets tongue-tied at the end when a questioner tries to convince him that he's just been voted US Weekly's Sexiest Man. (I've checked, and this appears to be a lie.) 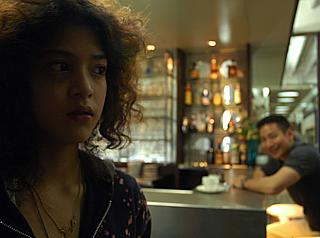 Married couple Wit (Pornwut Sarasin) and Deng (Lalita Panyopas) have just crashed out in their hotel room after a 22-hour long haul flight. While in the bar for a late-night fag break, Wit meets the eighteen-year-old girl Ploy (Apinya Sakuljaaroensuk - dammit, I'm trying to type Thai surnames and I haven't even had my breakfast yet), who's waiting in the bar for her mother's arrival later that morning. Wit takes pity on the girl and invites her back to his hotel room. It's an act that will graphically show up the cracks that have been appearing in Wit and Deng's marriage after eight years. Or is it seven?

Writer/director Pek-ek Ratanaruang has been a regular feature at the LFF over the past few years, mainly thanks to his widely acclaimed films Monrak Transistor and Last Life In The Universe. More recently, Invisible Waves was a bit of a disappointment, though I'm trying to write this review without reminding myself what was so disappointing about it: I think I found it inconsequentially rambling. Which makes Ploy a step forward, because it's so aggressively rambling - it doesn't quite know what it wants to do, but it makes you quite sure that it knows that it doesn't know what it wants to do. If you see what I mean.

What I think I mean is that Ploy is great at nailing that disconnected collapse that you get after spending hours and hours on a plane (a feeling I haven't experienced for about a year now, of course).  When you look at the film from that perspective, the unexpected jerks in the narrative make perfect sense - although if you don't buy into that reading, you could end up just walking out, as several people did at this screening. There are only so many times you can get away with the main narrative ruse that this film uses, and I think towards the end it tries to do it a couple more times than is plausible. But if you're in the mood for a movie that recreates the way you feel after being crammed into Economy for at least half a day, you could do worse.

The Belated Birthday Girl - Steve Buscemi's latest directorial outing is a remake of Dutch filmmaker Theo van Gogh's film of the same name.  In it he plays Pierre Peders, a political journalist sent, for reason which become clearer later in the film, to interview B-movie actress and soap star Katya (Sienna Miller).  After a disastrous attempt to conduct the interview in a New York restaurant, a few blocks from Katya's loft apartment, events conspire to bring Pierre back to Katya's apartment.  There, over the course of an evening, while Pierre tries to salvage something for his interview piece, the pair drink, argue, and engage in an intense battle of wits, revealing something of themselves and each other.

The script is often extremely funny, biting, and even verging occasionally on cruel, and is carried off terrifically by the two leads.  Aside from a few early scenes, the film is essentially a two-hander, and it relies heavily on the performances and the rapport between the characters.  Buscemi is on top form, as the worn-out journo who feels he's wasting his time with such "fluff pieces", and Sienna Miller is terrific as the actress "known more for who she fucks", as Pierre tells his brother in an early scene.  The whole thing is great fun, and although it does have the occasional well-placed dig at celebrity and journalism (at one point when Pierre is asking for material for his interview, Katya tells him to Google her), the film basically shows a brief and intense relationship between two people.

The film was shot by van Gogh's Dutch crew, using his 3-camera technique, and this allowed the scenes to have flow and energy.  As pointed out by Sandra Hebron at the start of the entertaining Q&A after the screning, one of the really great things about the film was the way it pulled your sympathies from one character to the other, and this came from the terrific script, but also from the excellent performances.  van Gogh had wanted to remake this and two other of his films as American films, but was murdered before he was able to, and so the decision to remake them with independent US directors (Stanley Tucci and John Turturro are on board for the other two) was in tribute to him.  Buscemi said that rather than attempting to remake the film as en exact copy of the original, the best tribute he could do was to make the best film he could, and Interview certainly succeeds.

Suzanne Vega Fanclub - Phew that's a relief! Yes you've guessed it, the BFI/51st Times LFF swirling light in the Odeon West End has been restored. It's amazing how an omission like that can rip the heart out of a festival. That said, the thing won't really begin for me until I see Sandra Hebron and her shiny black boots giving one of her onstage introductions.

So onto Steve Buscemi, an actor who will never be a superstar, but who will always be in work. In a way it is very hard to pin him down, because from what I can see he has no range whatsoever as an actor, yet his whole demeanour always brings instant credibility to what are often the most lightweight of movies. Interview finds him not only starring, but having directing and writing credits as well.

The premise is political journalist is demoted to interviewing an apparently vacuous B movie bimbo. He isn't prepared, she's pissed off, yet by the miracles of Hollywood they end up back at her flat where a verbal/physical joust of secrets and lies ensues.

Now of course that whole set up is tosh. First because any political journalist put in that position would merely jump ship to the nearest media rival. Also tosh because interviews with actors/actresses these days take place over the course of an afternoon in hotel rooms. Thus each hack is given his 15 minutes before the next one is wheeled in. Meanwhile there are assorted studio minders on hand to make sure the questions are not too pertinent, and the answers are not off message. So the idea of them ending up back at her flat could only happen in movie Hollywood as opposed to actual Hollywood. Anyway it all probably sounded good in a script conference. Yet for all that you feel it could have worked with better writing. It's just that Buscemi and Sienna Miller just cannot find anything in the dialogue with which they can really bite down on. What's worse, the final pay off is as limp as the yapping dog on Miller's mobile phone.

If anything this cries out to performed in a theatre, not just because of the virtual single set, but because the audience may have just generated enough electricity to actually ignite something. All that said, I get more impressed with Sienna Miller each time I see her, and feel she is one good part away from becoming a great actress.

Just in case the BBG's & my review don't stack up re: Sandra Hebron, it is because we were at different screenings.