Reviewed today: City Of Men, The Mosquito Problem And Other Stories, One Hundred Nails. 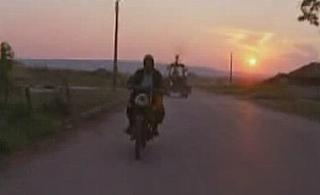 6.45pm: The Mosquito Problem And Other Stories (official site)

Documentaries are a very big deal at the LFF nowadays: after all, four of my top five films at last year's Festival were non-fictional. Over the last couple of years there's been an increased focus on the genre, with the introduction of both a Documentary Gala screening (this year it's Sicko), and the Grierson Award for best documentary at the Festival. This year's award has already been handed out - in fact, it was given to this film's director, Andrey Paounov, just before its main screening.

Paounov's movie is set in a small town in northern Bulgaria called Belene. As the title implies, it has a problem with mosquitoes, huge mutant buggers that terrify the local inhabitants even in winter. They try everything to get rid of them, including filling the whole town with toxic smoke on a regular basis, but it never seems to do the job. Nevertheless, as a local woman points out, apart from the mosquito problem it's not all that bad really.

After all, there's a regular tourist trade from the boats sailing up and down the Danube just next to Belene. Problem is, the tourists tend to confuse Belene town and the nearby Belene Island, home to an active prison on one side and a former Communist concentration camp on the other. And if you wander round the island for too long, you may get shot at by one of the roaming boar hunters. Meanwhile, if you're actually living in the town rather than the island, you're probably going to have difficulty finding a job, as the main prospect for employment - a brand new nuclear power station - has been under construction since 1981 and still isn't finished. But apart from that, yeah, not all that bad really.

The achievement of Paounov's film is that by the end of 100 minutes, you're as optimistic as that local woman: sure, the environment has its problems, but the people seem like a friendly enough bunch and they all look out for each other. There isn't really a narrative line to speak of, just the barest of framing devices - a local musician linking together sections with his own compositions - and a procession of interviews with the Belenians. But there's a warmth and charm that holds it all together, which means that even the darker stories being told don't disrupt the flow: it just feels like life, with all its attendant mood swings.

You'd expect an award-winning documentary to make a lot more noise than this one does: maybe that's why it won an award. I couldn't tell you as yet whether it's the best one in this year's Festival, but it's definitely got something that sticks with you. 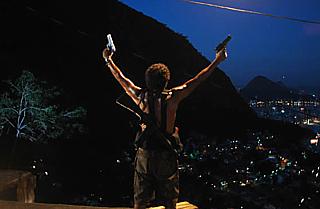 Mind you, if you think that the Belene Tourist Board is going to have difficulty selling itself after The Mosquito Problem, that's probably nothing compared to the impact City Of God must have had on tourism in Rio. (But then again...) Fernando Meirelles' gritty telling of life in the favelas was a highlight of LFF 2002, and subsequently went on to huge popular acclaim. But UK audiences may well be unaware that the story continues beyond the end of that film.

Meirelles and crew returned to the favelas shortly afterwards to kick off the City Of Men TV series - a show that's basically City Of God: The Next Generation. It follows the adventures of two teenage boys, Ace (Douglas Silva) and Wallace (Darlan Cunha), as they struggle to survive in the slums of Rio. Its first season was shown on BBC 4 a few years ago, and I rather enjoyed it: less flashy and intense than the movie which spawned it, more driven by plot and slowly-developing character. I was rather surprised to discover recently that since then, there have been at least another three seasons we haven't had over here.

And now the project returns to the big screen, as Paulo Morelli directs a cinema feature which wraps up the story from the TV show. By now Ace and Wallace are both coming of age, and each of them has daddy issues to deal with. Ace is a father himself, and too busy having fun to look after either his son or his wife. Meanwhile, Wallace is trying to track down his own long-lost dad. But they come to realise too late that their favela is becoming the site of an all-out turf war, one where the childhood friends will find themselves on opposing sides.

Morelli can't win, really: any analysis of City Of Men will invariably compare it against City Of God, which was a truly extraordinary film in its own right. But it has to be said, it holds up in comparison surprisingly well. It could never hope to have the same stratospheric impact that the first film made when it came apparently out of nowhere. Nevertheless, it has a twitchy nervous energy of its own, which builds slowly throughout the duration of the film rather than hitting you full-on from the outset like its predecessor. It's helped enormously by the thoroughly believable friendship of Ace and Wallace at its centre, helped by some clever flashbacks to the TV show (and, most astonishingly, some footage from a short Meirelles made with the actors in 1999 when they were still kids). By the time we reach the climax, we're so invested in the boys' friendship that we're on the edge of our seats.

City Of Men is no City Of God. But it has a bloody good go, and is a fine piece of socially conscious entertainment in its own right. Now, when do we get to see the rest of the TV series?

The Belated Birthday Girl - The film starts with an astonishing, both shocking and beautiful, piece of vandalism, when the rare books in an ecclesiastical library are discovered nailed to the floor, desks and walls.  Very quickly the prime suspect is identified, a theology professor, who everyone says looks a bit of a Jesus type, and then the scene shifts to following the professor as he leaves town, abandons his car, and settles into a rural community alongside the river Po.  Most of the rest of the film is set in this bucolic existence, with simple folk happy in their simple lives, and the professor, who everyone just calls Jesus, helping them find answers and peace.

When the authorities do finally catch up with him, the confrontation between the professor and the priest who "loved the books more than people" is a little direct, and in the end I found the combination of Christian allegory and the elevating of the simple life, and truth being in the hearts of simple people rather than in books and learning, not quite to my taste.  However, the film is beautifully shot, and gives a pleasant sense while watching it, but ultimately there is nothing in it which surpasses the imagery of the desecrated books in the library.