Reviewed today: I Always Wanted To Be A Gangster, The Trap, You, The Living. 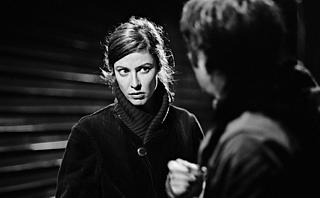 3.30pm: I Always Wanted To Be A Gangster

Those of you who enjoy reading between the lines may have noticed that despite my joy at discovering the return of cheap weekday matinee vouchers this year, I've only been to one weekday matinee so far. Put it down to those work commitments that I mentioned back at the start. But after a few days of earning enough cash to actually pay for all these tickets, I'm back out there in the matinees. (Accompanied by The Belated Birthday Girl, of course, who's been providing you with a degree of afternoon cover while I've been busy.)

Today's £7 voucher is going towards the second feature by French writer/director Samuel Benchetrit - although its chapter-based structure makes it feel more like a series of shorts than a full-blown feature. The stories are all based around people on the fringes of society, mainly its criminal elements. A suicidal rich girl has her day made even worse by a pair of kidnappers: a gang of criminal pensioners discover just how much time can change places, if not people: and two old pop stars compare their fortunes after several years apart on the road. All of the stories intersect at one key location, a roadside diner which appears to have recently become a magnet for hold-up merchants looking to make a quick Euro.

It was interesting on Monday listening to the presentation speech for the Grierson Award: the head of the judges described how tiring it can get spending days watching films back to back, and what a joy it is when you suddenly come across one that goes down effortlessly. And the way he felt about The Mosquito Problem And Other Stories sounds like the way I feel about I Always Wanted To Be A Gangster. It's a delightful movie, and I was genuinely surprised when we hit the final chapter to realise that almost two hours had flown by just like that.

Photographed in black and white in the old 1.33:1 Academy ratio, and rarely moving the camera within a shot, IAWTBAG (or, in French, JTRDUG) does its best to subliminally fool you into thinking you're watching an old-style drama about the criminal classes. Which means that when the jokes come - as they do surprisingly frequently - they're made even more hilarious. A large ensemble cast plays it all perfectly, never letting you forget the undercurrent of despair that makes the characters do what they do. Benchetrit's film wears its diverse reference points proudly on its sleeve (virtually every review I've read compares the pop star reunion to Coffee And Cigarettes at this point), but he's combined all those references into something that's uniquely his own. 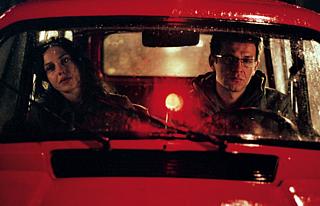 Mladen (Nebojša Glogovac) and Marija (Nataša Ninković) are a typical Belgrade couple: he manages a building site, she teaches, they're doing all right for themselves. But things change dramatically when their son Nemanja (Marko Đurović) is hospitalised with a serious heart condition, one which will require expensive surgery that they can't afford. They put an ad in the paper looking for benefactors, but get little response. That is, until the day that Mladen meets a mysterious man looking to give him all the money he needs in one go. Inevitably, though, there are strings attached.

The Trap is a modern tale of moral choices, very much in the style of Dostoevsky. And as its title implies, what makes the story so effective is that the everyman character of Mladen is slowly drawn into his situation, only to realise too late that he can't escape. There aren't any sudden melodramatic lurches in the story, just one man making a series of tough decisions, each one taking him further down a path that he doesn't want to travel. As we watch his situation get worse and worse, we wonder if we could have done any better.

Srdan Golubović's film is a powerful piece of work, cleverly scripted by Srđan Koljević and Melina Pota Koljević to slowly rack up the tension as it goes (a cunning split-level structure helps this immensely). But it's the performance of Nebojša Glogovac as Mladen that makes this so compelling to watch, making the lead character a painfully believable figure we can all identify with. It's an excellent movie that deserves a wider audience than a mere festival one. 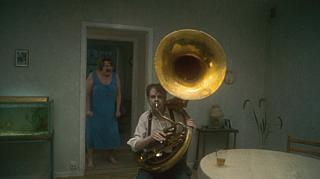 Roy Andersson is a minor legend within Swedish cinema, but like most British filmgoers - or at least, that small subset of British filmgoers who might be aware of Swedish directors - the first thing of his I saw was his 2000 feature Songs From The Second Floor. It was obvious from that film that Andersson had a visual style all of his own, using a (mostly) fixed camera to give a deadpan effect to large-scale visual gags. The gags weren't all that funny, unfortunately, but you had to admire his ambition.

You, The Living is Andersson's first film since then, and works to a similar template. It's a series of loosely linked scenes showing a number of people in a town struggling with the pressures of their daily lives. A psychiatrist talks to camera about how all his patients are just mean people who he'd rather prescribe drugs to than spend any time with. A young girl hooks up with the lead singer of a rock band, only to find the relationship doesn't turn out the way she saw it in her head. A man caught in a traffic jam passes the time describing a dream about how a faux pas at a family party resulted in his execution.

The common theme running through the sketches is the feeling of depression and dissatisfaction that these people have with the way things have turned out. Which may be what makes it very funny indeed, certainly funnier than Songs From The Second Floor was. If you wanted a reference point for a British audience, the downbeat atmosphere and ultra-stylised photography recalls Chris Morris' Jam, but the unexpected whimsical comedy that emerges from that gloom brings it closer to Morris' former colleague's work on The Armando Iannucci Shows.

In particular, the dream sequences in You, The Living remind me of the occasional moment of surprising joy that Iannucci can bring to his solo work. The scene relating to the rock singer's wedding is almost magical, as a tiny detail towards the side of the frame slowly expands to become utterly entrancing. Meanwhile, the family party nightmare is hysterical in the way it quickly sets up the catastrophe about to happen, makes you wait ages for it, and still manages to add one more surprising detail to the mix when it finally does happen.

It's obvious that Andersson is a comedy craftsman, able to take an old comic staple (like a man jumping between two adjacent queues trying to find the fastest-moving one) and execute it perfectly. He's working on a frequency that not everyone can catch - another key image I'll take from this screening is the repeated sight of people carrying their coats and heading for the cinema exit - but if you can pick it up, you'll have a great time.