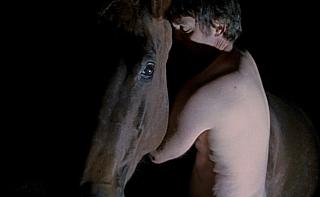 "You''re just watching this so you can put up a link to the song, aren't you?" said The Belated Birthday Girl.

There's no easy way of getting into this: Zoo is a documentary about a man who was bummed to death by a horse. Known to his associates (and therefore to us) only as Mr Hands, he was a respected Boeing employee with a wife and a young son. Nobody really knew about his other interest until the day he died from internal bleeding: and once the cause of that injury was established, the truth came out about the men who met regularly at a Washington State farm to commune with nature in their own particular way. And they'd have got away with it, too, if it wasn't for that meddling perforated colon.

As you'd imagine, this is the one out of my LFF selections this year that's been getting me funny looks whenever I've mentioned it to people. The obvious assumptions are that the subject will either be played for laughs, or will be exploited for every possible salacious detail. To be fair, director Robinson Devor has managed to avoid falling into either of those traps: the problem is, he hasn't really found a satisfactory third approach.

Obviously, there's no original footage from the incident, and nobody wants to talk on camera about it. As a result, the film isn't really much more than an illustrated radio documentary, using detailed audio interviews with Mr Hands' fellow zoophiles, the horse rescuer who had to clean up afterwards, and - in a peculiarly po-mo touch - the actor who plays one of the cops in the visual reconstructions which accompany the interviews. And before you ask, no, the act itself is barely seen at all - as FilmFan pointed out, there's more hardcore bestiality in the new Farrelly Brothers movie than there is in Zoo.

The result is a very glossy, classy-looking film - the reconstructions are lovingly shot, the score is effectively used, and it's all very reminiscent of the work of Errol Morris. Except that Morris can usually get to the heart of the subject in a way that Devor completely fails to do. You'd imagine that as we're discussing an act totally outside of the boundaries of society, there would be some sort of analysis as to why it happened. Instead, all we get are a couple of opposing viewpoints that never really connect with each other. The senator for the county gets new laws brought in to cover bestiality, arguing that it's as much a question of lack of consent as child abuse is: while a radio shock jock suggests that if a horse hasn't consented to having sex with a man, that sex isn't going to happen. The closest we get to a justification from a zoophile is that it's a simpler kind of love: "you don't have to know about the new Madonna CD or anythin'..." 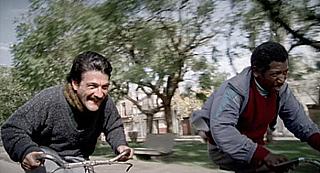 Catholicism and defecation: Bunuel always knew they were two great tastes that taste great together, and now this film from Uruguay combines them in the true-ish story of The Pope's Toilet. It's set in 1988, when Pope John Paul II paid a visit to the border town of Melo. It's a poor place: many of the inhabitants, like Beto (Cesar Troncoso), are struggling to make a living, mostly resorting to smuggling goods across the border from Brazil. So the Pope's visit is seen as an opportunity for them to make money from the thousands of people who'll be attending. Most of the townsfolk are setting up foodstalls, but Beto is thinking laterally: what the Pope's audience will really need after all that chorizo is access to a public toilet, and he's got the space in his yard for one.

The way they're selling El Baño Del Papa at film festivals is with the line "from the cinematographer of City Of God" - in fact, Cesar Charlone co-directs with writer Enrique Fernandez, but you can see why they're keen to draw parallels. This is a much smaller, less intense film, but very enjoyable with it. In its first half there's a lot of whimsical comedy at the expense of Beto's ridiculous plan, but it's always undercut with the harsh economic reality that inspired it. All Beto's attempts at trying to make a living are frustrated by border patrols and corrupt customs officials, and this may be the one thing he can do that will actually work.

The second half turns, inevitably, into a race against time - with the Pope's visit a fixed date, Beto has to struggle to get his plan implemented before his arrival. The trials he has to go through to install his toilet, and the revelation of what actually happens when the Pope arrives, are told with great charm and sympathy, which helps the social message to sneak past rather easily. It's possibly a little too sentimental in parts, but the grim reality is always there to counterbalance it. 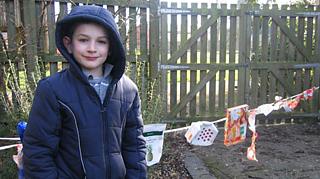 This one was The Belated Birthday Girl's choice - she absolutely loved documentarian Kim Longinotto's previous film Sisters In Law, and immediately jumped at the chance of seeing her latest one at the LFF. It was only after she'd booked for it that she started thinking about the subject of the film. As someone who doesn't really like children all that much, she'd just committed to a 100 minute movie about a special school for exceptionally unruly kids. Oops.

Hold Me Tight Let Me Go follows a year in the life of Mulberry Bush School in Oxford (and they really need to get their website finished before this film turns up on BBC2 in 2008). They take in excluded and traumatised kids for up to three years at a time, and work with them to overcome their problems. The school's philosophy is that these children generally have a poor sense of where they end and other people begin, which means they rarely think about how their actions affect those around them: the task is therefore to teach them this level of responsibility.

It's not an easy job: and in the early part of the film, you wonder how anyone can reason with these little sods. Longinotto wisely throws us in at the deep end  - see the opening minute of the film here (contains very strong language, as they say) - so that after initially bombarding us with the bad things that the kids can get up to, she can demonstrate how the teachers quietly restrain them and teach them to think about what they've done. We concentrate on a small number of boys during the film, and see how the teachers slowly build up a relationship with them. One of them shows a tremendous amount of progress during his time there, and everyone is sad to see him leave at the end of his stay. Others, however, will require a lot more attention.

This is a beautifully constructed documentary: like the best ones, it teaches you something about the world and a group of extraordinary people within it. It's not much of a surprise that the teachers come out of it as utter heroes: keeping their cool in what producer Roger Graef described afterwards as the equivalent of a war zone in terms of minute-by-minute stress, and doing astonishing work with the children. But it's possibly more surprising how much you empathise with the children by the end: from the screaming, spitting monsters of the opening scenes, we've come to appreciate the stresses they have and the effort they're putting into making themselves better. Watch out for the Foulmouthed Kids In TV Filth Shocker headlines in the tabloids some time next year, and catch the film on telly shortly after that. 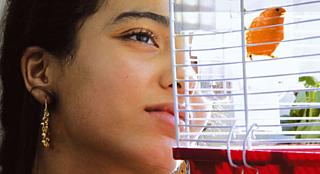 8.30pm: The Secret Of The Grain (official site)

In a similar fashion to El Baño Del Papa, here's another film about a man considering a late career change during economic hard times. North African immigrant Slimane (Habib Boufares) has been working in a French fishing community's shipyard for virtually all his life: but the fishing industry is changing fast, and there's no room for him any more. He puts his redundancy money into a dream project of his, a floating couscous restaurant.   To make this work, he'll need the help of all the members of his enormous extended family, including his ex-wife (who can actually make couscous) and his current lover (whose daughter turns out to be a major source of inspiration).

You get films like this at every LFF: ones which are tantalisingly close to being magnificent. Writer/director Abdellatif Kechiche does some astonishing work here, in a film that's simultaneously epic in scope (it's two and a half hours long) while intimate in its approach to its players. The dialogue-heavy scenes are visually enlivened by aggressively sharp editing. The characters are warmly drawn, utterly believable, and all deserving of sympathy no matter how much you may disagree with some of them. Pretty much the whole of the second half of the film is dedicated to a single setpiece - a fundraising event on the restaurant - and it's superbly paced, bringing all the threads of the narrative together and closing it off with an audacious flourish.

And yet, for all of the individual parts, it didn't quite come together as a whole for me. Which may be simply the fault of fourth-film-of-the-day syndrome - because no matter how often you do these long film-watching days, there's always going to be a point somewhere where you lose it, and my point came about a quarter of the way through this film. But it's a testament to the power of The Secret Of The Grain that it grabbed my attention again after losing it briefly, and I was with it all the way through the 75-minute climax at the fundraising. It's possible that watching it awake, it may turn out to be a full-blown masterpiece.

"the reconstructions are lovingly shot"

A couple of updates on the films reviewed here:

1. Mulberry Bush school has, indeed, managed to get their website in order in time for the British TV premiere of Hold Me Tight Let Me Go. It's on BBC Four on Thursday May 22nd at 10pm. (Yes, I know http://www.mulberrybush.org.uk/ says 9pm, but Radio Times disagrees.)

2. The Secret Of The Grain hits British cinemas on June 20th, but it's now been retitled Couscous. http://film.guardian.co.uk/features/featurepages/0,,2279222,00.html