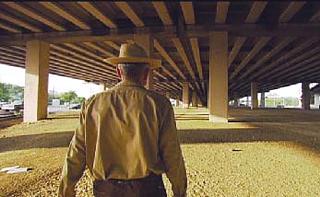 Given the impact of An Inconvenient Truth, it's surprising that we haven't been awash in eco-documentaries: this one from Robert Redford's Sundance Channel is the first one I can think of since the release of Al Gore's movie. Director Laura Dunn's theme is the impact that rampant property development has had on the ecology of America. Specifically, she's looking at Austin, Texas, where developers such as Gary Bradley have spent decades buying up open land and converting it into housing. As Austin is one of the most lefty parts of Texas, Bradley hasn't had it all his own way: in the early 90s, a huge campaign stopped work being done on the Barton Springs area, a popular gathering place for swimmers. But a couple of years after that, new Governor George W Bush came to power, and things turned around again.

The Unforeseen wears the names of its executive producers Terrence Malick and Robert Redford proudly on its sleeve, with Malick apparently responsible for the original idea. It's never a good idea to try to assign responsibility for particular parts of a film to its execs, but based on previous form you suspect that the touchy-feely bollocks in the movie is Malick's doing, with montages of admittedly beautiful natural imagery cut slowly to poetry. Meanwhile, Redford literally runs through this movie like a river: the most high-profile of the interviewees on display, he talks both as an environmental campaigner and a former user of Barton Springs.

With names like Redford involved, it's no real surprise what line the movie takes. But as director, Laura Dunn makes sure that her film has a strong narrative backbone, calmly showing how the relaxation of property development restrictions in the state has directly led to the death of agriculture, as farms in Austin are literally being closed down to make way for Wal-Marts.  She makes terrific use of archive footage, and has new interviews with several of the key players. Developer Gary Bradley is given a sympathetic hearing throughout, but the film isn't above a little demonisation of another of its key bad guys - we barely get to see the face of the lobbyist responsible for getting a number of key political decisions reversed, only his hands as he builds models of World War II bombers.

Occasional touches like that sometimes distract from what Dunn's trying to say, as do some appalllingly cliched choices on the soundtrack: both Arvo Part's Music For A Sad Bit and Sigur Ros' Soundtrack To Every Bloody Thing These Days turn up pretty much when you expect them. But it's a story that needs to be told, and on the whole it's told well. The Belated Birthday Girl came up with the best comparison for the developers interviewed here: they're exactly like the kids from Hold Me Tight Let Me Go yesterday, in that they seem to have no real concept of how anything they do affects anyone else. 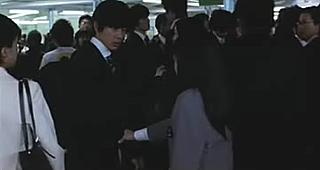 Arse-groping is a regular problem on crowded Japanese commuter trains, and the authorities are keen to crack down on it. So when a 15-year-old schoolgirl complains about an assault, the alleged perpetrator Teppei Kaneko (Ryo Kase) is rapidly banged up in a holding cell. The police tell him that a quick confession and payment of a fine will result in his release, and that'll be the end of it. Teppei refuses to consider this as an option, because he just didn't do it. But holding out for a trial is a dangerous thing in a country with a 99.9% conviction rate in its courts.

Director Masayuki Suo was last at the LFF a decade ago, with his film Shall We Dance? - a huge international success that even spawned an American remake. He hasn't made another film between then and now, which seems to suggest that the subject matter that brought him back to the movies must be very close to his heart. And I Just Didn't Do It certainly feels like the work of a man with a message he desperately wants to get across: about the way that the Japanese legal system is intensely focussed on results, and the way that acquittals are considered such a loss of face that virtually anything will be done by the authorities to prevent them from happening.

It's surprising just how quickly the 143 minutes of this film flies by, considering the amount of hard information it contains about the process of bringing someone to trial. There are several scenes where Teppei's legal team, headed by the deeply reliable Koji Yakusho, explain the ins and outs of the trial as much to the audience as to Teppei's mum and friends. But even when Suo is exposing the injustice at the heart of the system, he never forgets to make it the basis of a compelling story rather than the subject of a lecture.

As such, I Just Didn't Do It is edge-of-the-seat stuff, and a fine example of how best to wrap social commentary within a very entertaining film. You'll learn about the risks of getting a little too close to women on trains, the dangers of a legal system where presumption of innocence takes second place to clearance statistics, and the Japanese word for pants. (Which, for your information, is pronounced 'pants'.) 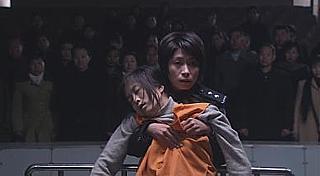 The transfer between the screenings of I Just Didn't Do It and Night Train was always going to be the most dangerous one of this year's LFF: we'd left ourselves a grand total of seven minutes between the end of the first film in NFT1 and the start of the second in NFT2. All it would take was a projectionist cock-up or a personal appearance by a director to ruin our schedule completely. Thankfully, the first film ends on time and the second film starts a couple of minutes late, and as a bonus we get the opportunity to compare the Japanese and Chinese judicial systems literally back to back.

The central character of Night Train is an official of the court rather than a defendant.  Wu Hongyan (Liu Dan) has a wide range of duties, from keeping order in the courtroom to shooting death row convicts in the head. Her constant commuting and the stresses of her job make her personal life difficult: she tries to meet up with men through an introduction agency, but all of them turn out to be unsuitable or worse. Her life is about to get even more complicated thanks to Li Jun (Qi Dao), the husband of a criminal that she executed personally.

This is the second film from writer/director Diao Yinan, whose debut Uniform played at the 2004 LFF. Like his earlier film, this one is shot on digital and has a great visual style to it, using the slightly distorted colour palette of video to give variety to the locations used, from the hellish glow of the steel factory to the harsh glare of the snowscapes in the final scenes. The story, however, is a little more uncertain: most of the film is told in images, and it's not immediately obvious that the few scenes that rely on dialogue are incredibly important if you want to keep a handle on what's going on. And after the intrigue of the early scenes, once the film narrows its focus down to its two main protagonists it becomes a lot less interesting.

Nevertheless, although it's not the mirror on Chinese society that Uniform was, Night Train shows that Diao is still a director to watch out for, at least in terms of style and atmosphere. Though I'd imagine that if the film was ever to be screened in the UK outside of a festival context, it'd probably end up losing a rather nasty horse-beating sequence that was included here. 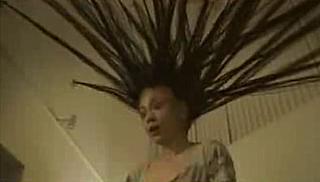 Thanks to Ring, the world now associates Japanese horror with the image of a scary young girl with long black hair. So it was only a matter of time before the hair got a starring role in its own movie.

At the start of EXTE, a woman is found dead inside a shipping container full of human hair. The police are baffled, but even more so when the body disappears from their morgue. What they don't realise is that morgue attendant Yamazaki (Ren Oshugi) is a hair fetishist who's taken the corpse back to his house, where it holds pride of place in his collection. Delighted to discover that the corpse is still growing hair even after death, he uses it to make hair extensions which he can sell to the local salons. Inevitably, the extensions start killing people.

If ever there was a movie plot that had 'late night Friday at a festival' written all over it, that has to be it. It's the work of cult Japanese director Sion Sono, who so far is best known in the West for the notorious Suicide Circle: a film which opened with one of the great whatthefuck moments of modern horror cinema, but failed to do anything interesting after that. Happily, EXTE has plenty of whatthefuck moments to spare, from beginning to end - moments of both surreal comedy and eye-popping gore.

Sono doesn't take any of this in the least bit seriously, which helps a lot: knowing that his audience doesn't really care about the basic setup of the characters, he has them baldly state their backstories to each other in mockingly on-the-nose dialogue, and carries on the silliness from there. Chiaki Kuriyama of Battle Royale and Kill Bill fame plays against (the Western perception of) her type to make a charming heroine, but the real highlight is Ren Oshugi's wild performance as the morgue attendant: no matter how clogged the scenery is with hair, it never stops him from dementedly chewing that scenery at every possible opportunity. A UK DVD release is apparently on the way, but a late night cinema screening is probably EXTE's true spiritual home.