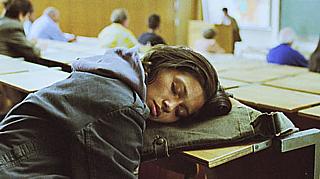 Ah, dammit. Last Friday, when we were in the Kwik-E-Mart or equivalent at the side of Waterloo Station, they were playing Wham's Edge Of Heaven on the radio. And now it's come back to haunt the inside of my head all day. Grrrr.

Fatih Akin's film has nothing to do with the song, of course. It starts off inside the Turkish community in Bremen, where Ali Aksu (Tuncel Kurtiz) lives on his own. Well, on his own apart from occasional visits by his son Nejat (Baki Davrak), and the prostitute Yeter (Nursel Koese) who he's just asked to move in with him. Yeter has a long-lost daughter Ayten (Nurgul Yesilcay), and circumstances inspire Nejat to travel to Turkey to track her down. But unbeknown to him, Ayten has travelled in the opposite direction to look for her mother...

True, that's a bit of a coincidence. There are a lot of them in this film, but the key thing is that they have no bearing on the plot whatsoever. Part of the delight of this multi-stranded narrative is seeing how frequently the strands come close to each other without ever crossing. Akin's ingeniously structured script has mirror images running all the way through it, as virtually every action taken by someone is repeated by someone else further down the line.

This could seem like an excuse for a lot of narrative trickery, but the story is emotionally involving as well as intellectually satisfying. As the paths of the characters combine in unexpected ways, the film becomes a reflection on family, loyalty and fate. We care about all the people here as people, not just as pawns within a carefully constructed game. That thing I said yesterday about how all the best films are usually well out of the way by this  stage in the Festival? I may have been wrong about that. 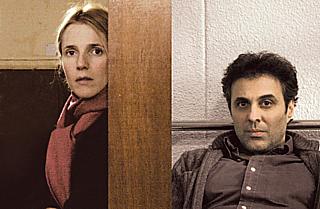 Something worth noting on this final day of LFF 2007. In the past, when I've been doing a lot of matinees, I've generally found that no more than a couple per Festival have been sold out, so I could just stroll up to the box office a few minutes before showtime and get in with a matinee voucher. Not this year - lots of afternoon films have been playing to capacity audiences, and even a low-key little French movie like this one requires me to wait for returns to go on sale.

It isn't until I'm in my seat that the true horror of this particular case is revealed - the front three rows are occupied by thirty or so kids from a local secondary school, who've obviously been dragged along to this film to help with their French studies. Surprisingly, apart from the screening having to start a couple of minutes late while they all swap seats with each other, once the film kicks off they're thoroughly well-behaved throughout. (Though listening to two of them talking in the loo afterwards, that may have been because they all slept through it.)

Emmanuelle Cuau's film doesn't really seem like teen fodder, to be honest. Its hero is an accountant, Alex (Gilbert Melki), who lives a perfectly uneventful life with his taxi driver wife Beatrice (Sandrine Kiberlain). That's until after a day suffering at the hands of various authority figures, he stumbles upon a police ID patrol in the street on the way home. For simply paying a little too much attention to them, he's bundled into a police cell for the night. If he'd been quiet about it the morning after, maybe they wouldn't have stuck him in the loony bin. But he wasn't, so they did.

The first half of Very Well, Thank You is ultimately frustrating as hell. You can see the sort of Kafkaesque nightmare that Cuau is trying to conjure up in her scenario, but it just feels incredibly forced. All of the people Alex meets are utterly implacable jobsworths, refusing to bend the rules for a minor infraction: but for the story to work, Alex has to behave like a bit of a dick on a regular basis. As such, it's very difficult to feel any sympathy for him: it's true that part of the theme of the film is the pressure to conform that we all encounter in life, but Alex's refusal to play by the smallest of rules in the face of the tyranny he encounters here just seems pig-headed and daft.

However, the second half of the film is where it gets interesting for me: the aftermath of Alex's confinement. With his former job now a distant memory, Alex has to learn all the skills that will get him back into the employment market. Maybe it's just that I've had to go through this sort of thing in the recent past, but the scenes where Alex has to learn the sort of lies that employers like to hear in interviews - and in English as well as French - struck a chord with me. Plus, there's an interesting focus on the effect that all of this has had on his wife Beatrice. As a result, where the first half frequently had me seething at its contrived conflicts, the second half is a very neat comedy on the world of work and how best to survive in it. Not sure if it's the best lesson to be giving a school class, though. 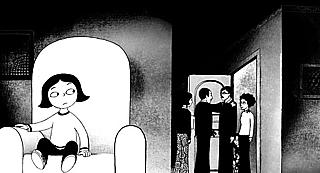 As I've mentioned far too many times already, no Closing Gala for us this year. Which means that we have to make up our own. If you look at the final slots for each cinema in the LFF programme listing, they're generally shown as 'tbc' - they're used to programme in last-minute repeats of films that have proven popular with audiences during the Festival. Hence: Persepolis.

Based on the autobiographical graphic novel by Marjane Satrapi, and co-directed by Satrapi and Vincent Paronnaud, Persepolis tells the story of little Marjane (voice by Chiara Mastroianni) as she grows up in the seventies and eighties. Life as a child in seventies Tehran gets pretty exciting when the Shah is deposed, and Marjane's parents think that this is the turning point that Iran needs. Unfortunately, it quickly becomes apparent that things are getting worse rather than better, as Marjane is forced to take the veil and her interest in Western pop culture is seen as a threat to the new regime. Her choice is a difficult one: stay in Iran with her family and friends, or move to Europe and start a new life.

I haven't read the original comics, but I'm assuming that Satrapi has transferred them from page to screen without too much external interference: and the result is lovely. Her artwork is deceptively simple, almost cartoony, to the extent that a viewer not paying too much attention might dismiss it without a second thought. But the art is just as complex as it needs to be, using the Japanese anime trick of reducing facial detail to the bare minimum so as to force the viewer into identifying with her characters. With frequent switches in style to denote changes in mood, but an overall coherent black-and-white look throughout, it's visually excellent.

None of this would mean very much if Satrapi's narrative wasn't as strong as it is. Showing us the effects of revolution and civil war in Iran from a first-person perspective, her story combines a young girl's coming-of-age story, a lesson in recent Middle Eastern history, and a study in the clashes in culture between East and the West. All of these elements are combined so smoothly that the final film is almost effortless to watch, which some viewers may mistake for not very much going on. They'd be quite wrong - it's funny, moving and thought-provoking all at the same time.

And that's our last film of the 2007 London Film Festival. Stay tuned for final thoughts in The Wrap Party.

Suzanne Vega Fanclub - Interesting little Mexican film about the problems most of us have (at some time or other) with food.

Elena is a forty something stick thin anorexic. Her main obsession seems to be working through her neurosis, by virtue of making her normal sized ten year old daughter (Linda) attend various doctors and obesity clinics. Meanwhile nun Mathilde is making a deal with God that she will stop eating if in return he stops the rain that is flooding Mexico.

So basically two stories for the price of one with Linda's (Sunday?) school attendence being the link between the two. Now to be honest I didn't really get the nuns story, and for my money the film would have been better off without it. However the saga of Elena and Linda was excellent and a perfect illustration on how parents dump their anxieties on their children, whilst screwing them up in the process. Even better Elena's husband, fed up with trying to bone the boney one, starts to play away with a rather more fuller figured student from his campus. In some senses the film does push your buttons, and I am sure en masse everyone in the audience was silently screaming at Elena "You're the one with the problem, not your daughter". However it was all done with style and a sense of black humour, when it would have been all too easy for the piece to be completely overwrought.

The Q&A with the director/writer Simon Bross was something else entirely, and lasted over half an hour. Basically the man is slightly bonkers, taking anything up to ten minutes to answer a single question. Also having pointed out his wife in the audience, he then stated that they had now been married twenty years (which she corrected to twenty eight) and also shared that he still enjoys oral sex with her. Thus not content to leave bad enough alone there, he then told one of the rudest and worst taste jokes I have ever heard, leaving the audience to wonder if he really had just said that (no I won't be reciting it).

Anyway the film is apparently number one in the Mexican box office, and well worth catching whenever/wherever.

"That thing I said yesterday about how all the best films are usually well out of the way by this stage in the Festival? I may have been wrong about that."

You know, I was tempted to post a response to that yesterday citing The Edge of Heaven, and Still Life which I saw on the final day of LFF 2006.