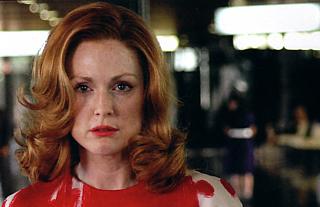 It's getting near the end of the Festival, and though nobody will ever admit it, let's be honest about this - all the good films have been and gone by now, and the last day or two is usually taken up with the less interesting things that they couldn't find room for anywhere else in the programme. Which leads to the question; how do you make choices of the films you want to see at this stage, if - say - you've got a foolishly self-imposed quota of three or more a day to fill?

Director Tom Kalin was one of the leading lights of the New Queer Cinema back in the 90s: so obviously you find yourself looking for signifiers in this family story, which spans the first three decades of the life of Tony Baekeland (played as an adult by Eddie Redmayne). Within five minutes, his over-protective mother Barbara (Julianne Moore) is chatting to friends at a party about her husband Brooks (Stephen Dillane) and his exploration hobby: "if there's a dirt road somewhere, he'll go up it!" Hmmm. Tony grows into a teenager with a similar approach to life, attracting others who feel the same ("I enjoy the black tobacco, but I prefer the brown"). But through it all, the suffocating influence of his mother remains a constant.

Based on a true crime case (rather like Kalin's acclaimed debut Swoon), Savage Grace doesn't really tell us very much about it. Kalin is obviously aiming for the inevitability of great tragedy, but never achieves it: the plot is all just stuff that happens. And it happens in such a tasteful and restrained way that it doesn't even work as the Catalogue Of Perversions that some tabloids will doubtless see it as. It's all just rather dull and inoffensive - even with the scene that freaked out FilmFan so much - and I suppose that counts as some sort of achievement. But not much of one. 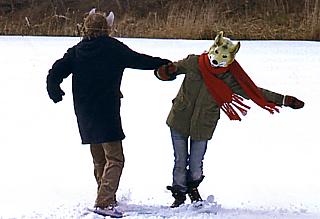 And sometimes you just end up seeing a film because you really like the picture accompanying it in the programme.

Lars (Constantin von Jascheroff) is a teenage boy caught in the middle of his parents' separation. He's spending the days leading up to Christmas at his father's house, a place in the country with just a pair of dogs for company. The situation with his parents is getting rather tense, but things are made a little easier when he makes friends with mute girl Marie (Luise Berndt). But her dad's over-protective nature just increases the tension even more.

Ann-Kristin Reyels' debut has a wispy, peculiar charm all of its own. She manages to nail the wild mood swings of adolescence beautifully, the way everything feels absolutely wonderful or utterly horrible to you with no middle ground. There's a quietly understated humour to the proceedings, but the most interesting bits come with the sudden lurches into darker territory. They're not particularly elegant lurches, giving the film overall the feel of a slightly cack-handed Bill Forsyth, but I'd imagine a more assured tone will come in Reyels' future work. And without wanting to give too much away, this year's Festival appears to be a good one for aggressively open endings. 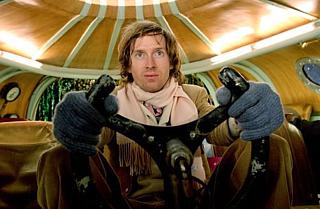 As previously noted, tickets for Closing Gala The Darjeeling Limited are rarer than rocking-horse crap, and nobody from the Spank organisation has been able to get hold of one. Still, the TCM Screen Talk by its director works as a substitute. (That's what I'm telling myself, anyway.)

When you get down to it, Anderson's back catalogue isn't all that big (The Darjeeling Limited is only his fifth feature): so interviewer Sandra Hebron can take the obvious approach of a chronological run through the films, with clips from each one. For his debut Bottle Rocket we have to make do with a clip shown from DVD, as the number of prints out there is vanishingly small. The initial script (by Anderson and regular collaborator Owen Wilson) was for a three and a half hour light comedy, but when they tried to film it they ran out of money after twelve minutes, so it became a short. That showed enough promise for them to get the money to remake it as a feature, one which started out as a Mean Streets-style study of criminality but took on a lighter tone once Anderson cast his yoga teacher as a safecracker.

From there we move on to Rushmore, the film that was most people's introduction to the Anderson universe. And it is a universe: he enjoys creating an environment by adding as many details as he can from real-life experience, curious to see how they will all mix together. Those environments are also categorised by an affection for all his characters, no matter how out of kilter they are. ("I can't hold a grudge against a character long enough to make them bad.")

From Rushmore onwards we can see the development of the rep company that Anderson feels most comfortable working with - Wilson, Jason Schwartzman, Bill Murray and so on. One of the things that distinguishes each of his movies from the others is how the outsiders fit in with that company. Gene Hackman felt slightly uncomfortable on The Royal Tenenbaums - "working for scale pay isn't part of his tradition of filmmaking" - but the friction led to an astonishing performance. Similarly, it sounds like Adrien Brody's insertion into the company for The Darjeeling Limited is going to give that film its own particular feel.

The Q&A at the end is an incredibly enthusiastic one, with what looks like a quarter of the audience wanting to ask Anderson something. Inevitably, a couple of the questions come from dull tossers who are far too keen on the sound of their own voices, but Anderson treats them all with respect and gives snappy answers to as many of them as he can. Things we learn include the following; he'd like to make a documentary where he gathers his friends from all walks of life and takes them white water rafting: rather like Max Fischer in Rushmore, he produced his own plays at school, the high point being his one-act recreation of The Alamo: he justifies the use of old objects in his production design with "I don't want to do things that will make my films feel dated in the future, so I pre-date them": and his suits are made by Mr Ned on Lower 5th Avenue.

Anderson is entertaining company for the 75 minutes or so we have with him, and like the best of these discussions he makes you want to go out and watch the films all over again. Maybe I'll do just that with The Life Aquatic With Steve Zissou, which was a little too Anderson-by-numbers for me first time round. Just give me another day or so to wrap up this festival...

Just a point on THE LIFE AQUATIC WIEH STEVE ZISSOU, namely if you are a regular subscriber to National Geographic (as yours truly is) then you realise how many characters like that are actually out there in the field (or in this case the water).

Trust you had a good time at the festival spank