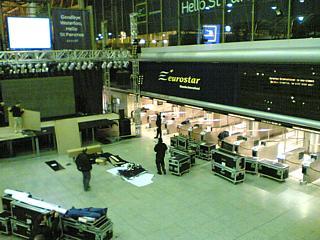 We couldn't not do it, could we? Consider the following:

- our plan to save the planet by not using planes in 2007 is still holding up halfway through November, even though I currently have the sort of job where I can be asked if I'm available to go out to New Zealand on Friday. (This actually happened.)

- we've already spent a large proportion of this year travelling around by train, specifically on our Grand Tour of Europe in the Spring.

- the London departure point for the Eurostar rail service to Paris and Brussels moved on November 14th from Waterloo to the newly-refurbished St Pancras International station, at the same time going carbon neutral and converting to a high speed rail link.

- The Belated Birthday Girl's birthday is on November 14th.

We couldn't not do it, could we?

Most of the media focus has been on the opening of St Pancras International station on November 14th as London's new gateway to Europe. But obviously there's a flipside to that: November 13th was the last night of London Waterloo in that role. To be honest, I've only ever got the train to France from there on two occasions: once on a works jolly about a decade ago, and you already know about the second time. Still, once we'd decided that we were going to get one of the first Paris trains out of St Pancras, it seemed like an amusing idea to pop out the night before and watch the last one out of Waterloo.

Unfortunately, we cocked up. Having read Eurostar's promotional emails, we'd got the impression that the last departure from the station was at around 8pm, so we made plans to get there around 6.30 and see what was happening. In fact, 8pm was the time of the last arrival: the last train out of Waterloo was officially the 18:12 to Paris (did you see what they did there?), though it actually pulled out of the station about half an hour after that. We were just about on time to see the departure boards display the last call for the service, and then display plaintive messages about how there were no more trains from those platforms ever. (Until they convert them for use with domestic services in 2009, apparently.)

So by the time we actually got there, Waterloo International had a definite fin de siecle feeling to it. The stage for the finale concert we'd completely missed out on was being dismantled: the main people left on the concourse were Eurostar staff carrying promotional barriers they'd nicked from the departure platform, and a couple of late journalists looking for anyone they could find to give them some quotes. (The Belated Birthday Girl duly obliged, though we haven't the faintest idea where her comment "basically, we're celebrating the British end of the high speed link being 13 years late" will end up.) 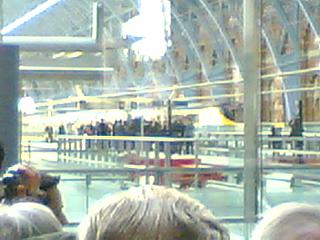 Still, at least the opening of St Pancras International was better promoted, allowing us to get there in plenty of time for the festivities. Although our train wasn't scheduled to leave till 12.30, we got there around ten to check out the facilities at the new station, as well as the media frenzy gathering around the first couple of train arrivals and departures.

Obviously, this was what all the action was based round. Within a ten minute window around 11am, we had two trains leaving for Paris and Brussels, and two arriving from the opposite direction. Unlike Waterloo, where all the platforms are covered up from public view, the international platforms at St Pancras are clearly visible from a viewing platform separated by glass, and that's where everybody was gathered come 11am. Inevitably, all the rolling news networks had their people in pole position using the platforms as a backdrop to their reporters, and the rest of us were struggling to see past them: but with a bit of squinting it was possible to see the historic trains, and even get a smudgy picture of the first one leaving for Paris (see above). It's a quite amusing sight watching people applauding trains for just pulling in and out of a station, and I wonder if there'll be a permanent crowd at St Pancras from now on cheering the movement of every single international service. It's possible the world might be a better place if that was the case.

The four trains around 11am were purely for VIPs and media wasters: but The BBG and I had managed (for a mere £29.50 each way) to wangle ourselves onto the first Paris service after that, which was therefore the first commercial service out of St Pancras International. Coincidentally, we were joined by Seapea and Robert, who were also celebrating a birthday with a Paris day trip (although Seapea's celebrations have been smeared across most of the last five weeks, rather like those of the Queen or Jack Daniels). For that reason, a visit to the much-hyped champagne bar appeared to be in order, as we grabbed a glass apiece of their cheapest fizz (£7.50 each, in case you were wondering). Inevitably, there was a bit of a scrum at the bar after those initial departures, particularly as Eurostar Frequent Travellers had been given free booze tokens and a large section of the bar all to themselves: but we managed to get our bubbly eventually, and I'd imagine the service will get better after that first day.

What about the rest of the station facilities, you may ask? Well, it has to be said things are a little lacking. Yes, we should cheer that a major British engineering project has been completed on time and to budget, allowing trains to arrive and depart on the planned opening date. But despite the splendid look of the place, and the few bits that the press have concentrated on - the champagne bar, the restoration of the exterior, the surprisingly charming statue of two lovers meeting under the clock - a lot of the trimmings are still not quite there yet. The vast majority of the shops and restaurants within the complex are still under construction: in particular, if you were looking for somewhere to eat on the first day, your only options were the domestic-level snack bars (Camden Food Co and West Cornwall Pasties), or pricey nibbles at the champagne bar. There was also a complete lack of cash machines or bureaux de change, meaning that The BBG and I had to enter France with no more than a couple of quid in sterling in our combined pockets. (Yes, we spent the last of our cash on champagne, what of it?)

Having said that, the station delivers in all the areas directly relating to your actual journey: the check-in and security processes are surprisingly painless, and led to one of the most charming events of the day, when Passport Control put a special stamp on The BBG's passport just because it was her B. But once you were in the departure lounge, again the facilities seemed fairly bare: a newsstand, and a bar that looked like it was only just opening at noon. 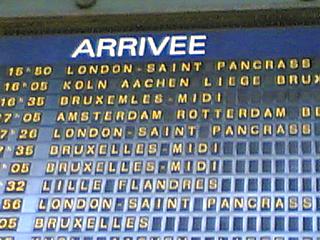 So here's the thing. St Pancras International is advertising itself as Europe's Destination Station, the idea being that it will become a lovely place in its own right that people will want to visit. And the potential's certainly there: but as at Day One, the framework is in place without all the detail we were promised. The opening was marked by a small demo by cyclists, complaining about the lack of facilities for them. But it's hard to see why they feel hard done by, when other groups could complain about exactly the same treatment: such as consumers of food, or users of the monetary system. Maybe they could sort all of those out at the same time, and soon.

But what about the journey? Well, again, the transport side of the experience can't be faulted. The train left on time - a few minutes early, actually - and whizzed though to Ebbsfleet via the new tunnel at literally ear-popping speed. (Although the new station there doesn't actually open for another few weeks, we stopped there briefly anyway, mainly so the guard could read out an announcement about its opening.) From there the journey progressed as swiftly and painlessly as you'd expect, marred only by the couple of noisy twonks on the phone behind us. "'Hello Mummy! We're on the train! Just about to go under the tunnel now!" WHAT! DOES! THAT! MEAN? Oh, I do hope they can't read this as I'm typing it at my seat.

We arrived at Gare du Nord two hours and twenty minutes later, to discover that their departure boards don't know how to spell St Pancras yet, though their announcement music is still ludicrously funky. We only really had four hours to play with before we went home again, so after a panicky raid on the station's ATM for some Euros we hit the streets, discovering the delights of Paris rush hour traffic - and more than that, Paris rush hour traffic on the day of a transport strike. The RATP site (including, usefully, a nifty WAP version for phones) suggested a few Metro trains were running, but we decided to take a walk anyway. We strolled across town to Place de la Concorde, and watched the sun going down behind the Eiffel Tower.

Dinner was at Chez Flottes, chosen because a) they'd make us dinner at 6pm, and we needed to be that early to get our train back home, and b) because they did online booking. It turned out that most Parisians weren't even considering eating at that hour, meaning the reservation was a little unnecessary. The place was rather quiet when we arrived, but the presence of a jazz duo had warmed the joint up nicely by the time we left, stuffed full of the cheesy garlicky mash called aligot that Flottes specialises in. We walked back again the way we came, got the last train out of Gare du Nord at 9.15pm local time, watched a suitably appropriate DVD on the way, and were back in London before the pubs shut.

Obviously, this was a rather truncated day trip, because the first train out of St Pancras didn't leave till 12.30pm: on a normal day, you could leave as early as 5.21am, giving you a solid twelve hours to play in Paris. Once they get St Pancras in full working order - and it's well on the way - then that could make for some very interesting days out. Hopefully they'll have all the necessary bits in place in time for Christmas. Why? Well, I think I'll make you wait a little longer for the answer to that one. Being a monkey, and all.

I am going up to Derby from St Pancras via Midland Mainline (or whatever they call themselves now) on Saturday. I may buy a sausage roll before departing.

I guess that means we both lead equally glamourous lives then.

They "nicked" our picnic

What, they nicked it at St Pancras? It wouldn't surprise me, you probably had more food in your bag than they had in the whole of the station that day. More details, please?