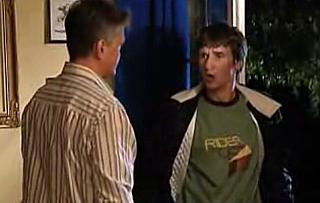 Maybe I was a little too harsh on Das iTeam last week. Then again, having heard the results from the German jury, maybe I wasn't. Either way, you know as well as I do that this isn't generally the sort of site that revels in kicking the crap out of bad stuff. That sort of thing's far too easy, and you can get it anywhere on the internet. Celebrating the good stuff that's out there and not widely known about: that's a lot harder, but much more satisfying.

So, then, let's balance out Das iTeam with this: Soupy Norman, a show which proves that in fact it is possible to take a successful TV show from one country, and adapt it to make it equally successful in another one. Although it looks like a total lack of respect for the original may be the key to success in this case.

The initial raw material for Soupy Norman is a Polish soap opera, Pierwsza Miłość (First Love). Based on the available evidence, it appears to be a fairly standard story of a young girl leaving her family to make a living in the big city, and the trials and tribulations she encounters along the way. Two comedians - Mark Doherty and Barry Murphy  - decided that what this really needed was a complete redub and rewrite, to transplant the whole shebang into Ireland with their own surreal plots. They piloted the idea in a sketch on Armando Iannucci's Time Trumpet in 2006, and within a year they had a series of eight ten-minute shows on Ireland's RTE Two.

The comedy redub isn't an original idea, of course: Woody Allen based an entire feature film around it, while on TV we've had the BBC's 1989 revoicing of The Flashing Blade (the early work of Russell T Davies, I've just discovered) and Australia's Bargearse. All of these work to a very similar formula - getting their laughs from the huge gap between what we're seeing on screen and what we hear in the dialogue. So, for example, Woody Allen's What's Up Tiger Lily? looks like a Japanese spy thriller, but actually tells the story of the hunt for an egg salad recipe.

Initially, Soupy Norman doesn't stray all that far from the original show's premise. The central character is now Esther, who travels to Dublin from her home in Buttevant, County Cork, much to the consternation of her father and grandfather. Part of the fun is that as a Cork girl in Dublin, Esther gets to suffer all the prejudice that culchies experience in the big city. (Mind you, she probably deserves it. "I wonder what time it is in Cork?" she ponders on her first night away.) Meanwhile, left on their own back home, her dad and grandad get into endless arguments about not very much at all, frequently interrupted by the appearance of local drunk Soupy Norman on their doorstep.

Soupy Norman has a lot more layers to it than some of the other redub shows I mentioned earlier. It plays around with the cliches of soap opera itself - Pierwsza Miłość is a typical example of the genre no matter what language it's in, and there are several old familiar situations given a wonky twist in the redub. There's the delight in being allowed to see the narrative strings: watching whole plots being set up in the dialogue which have obviously been inspired by a small visual detail, or a chance bit of lipsyncing. The same applies to the way that certain bits of footage are re-used (with different dialogue) in more than one episode, most spectacularly in the weekly appearances of Soupy himself. Plus, of course, it's fun to hear dialogue this stupid (and, occasionally, rude) coming out of the mouths of terribly earnest looking people.  And aside from all the post-modernism and surrealism, there are straightforward jokes aplenty. (Grandad and Dad drinking together: "Malt, is it?" "No, balsamic.")

It's been assembled with a great deal of care: Doherty and Murphy have gone to enormous lengths to make the lipsync work as well as possible, relishing the opportunity to have a character say something berserk just because it matches their mouth movements at the time. The result is a whole string of endlessly quotable lines - Soupy's "I wouldn't marry her if you paid me in... swans" may be my all-time favourite, but there are literally dozens more.

Will it ever get onto telly outside of Ireland? Will it ever get a DVD release? Difficult to say - as these are ten minute filler programmes, it's hard to imagine them having any other sort of life. Except, of course, on YouTube, with its lax approach to copyright and its ten minute maximum file length. So here are the eight episodes broadcast so far, plus a half-hour Christmas special hacked into three parts. Just watch it, you boggers.

(The Christmas Special is, to be honest, a disposable clip show made up of bits from the eight proper episodes preceding it, plus a framing device that probably won't be all that funny to viewers outside of Ireland. But Part 2 starts with the definitive performance of the Soupy Norman theme music, so it stays here.)