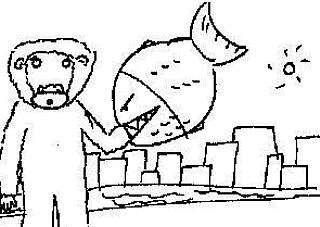 Well, you got most of what I promised you last month. At least I'm not in the embarrassing situation of having my discussions of the best films and music of 2007 drifting into February of the following year. As for the rest? Well, the travel pieces always take a while, but I'm reasonably hopeful that I can write up our Christmas in Copenhagen before the end of this month. I'm still planning to write something about the Pogues, too, once I can block out half a day or so to listen to their back catalogue all in one go.

Other plans for February include a couple of film-related articles, as there are some interesting-looking seasons of movies in London cinemas this month. Plus, I think, an old comic for you to look at. And I may not quite be done yet on the subject of TV Comedy Shows Of Foreign Lands. We'll see.

In the meantime, the Simian Substitute SiteOf The Month for February 2008 is Monkeys Might Puke, the homepage of cartoonist Dan Lester. The chain of events that led me to this site goes something like this. Warren Ellis, who you should all know and love by now, is about to start publishing a free weekly webcomic called FreakAngels, with art by Paul Duffield. The first episode should be appearing on February 15th, but the website is already up and running with preview images and lots of other stuff - including Ellis' latest discussion board, Whitechapel. Recently, he started a thread on the board called The Indie Comics Stage, giving independent comics creators the chance to whore their work out to Ellis' audience. And Dan Lester hooked me instantly with this rather rude cartoon. (The title helped too, naturally.)

The main purpose of Lester's site is to flog hard copies of the Monkeys Might Puke comic, but there's also plenty of free content for the passing trade. Cakey Jake is the archive for a series of gag strips with the faintest of connecting threads between them: Just The Punchline is as brilliantly frustrating as its title suggests: Vomiting Simian appears to be the stuff he writes when he's in a particularly bad mood. And there's much more for you to discover, including his patchily updated blog. Just don't blame me if any of it offends you.