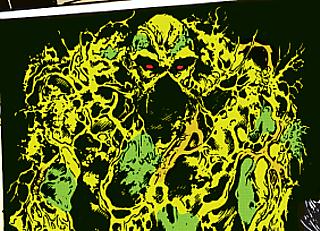 The mythology of the 1980s comics revival is fairly well established by now. A handful of writers and artists - many of them from the UK - invaded the American comics industry and made it a much more interesting place to be. Northampton's own Alan Moore was one of the key figures in that renaissance, and his work with artist Dave Gibbons on Watchmen is justifiably regarded as a landmark.

But the fans know that Watchmen didn't just come out of nowhere: before then, Moore had been doing work on one of DC's old monster titles - Swamp Thing - that paved the way for everything that was to follow. It was one of the first mainstream comic titles that actively marketed itself as being for an adult audience, ditching the traditional Comics Code Authority seal of approval. It showed that it was possible to take old characters and breathe new life into them, through a complete re-imagining of who they were. And Moore's influence can still be detected in the dozens of British writers who've worked for Marvel and DC in the quarter-century since then.

Fancy reading a comic that actually changed the medium? Because you can do that for free, now.

The character of the Swamp Thing was created by Len Wein and Berni Wrightson in the early seventies. In a classic comic-book transformation plot, mild-mannered scientist Alec Holland is blown up by enemies looking to steal his bio-regenerative formula. The combination of chemicals, fire and the nearby swamp result in Alec becoming a whole new lifeform - the Swamp Thing. He had his revenge, as you'd imagine, and then settled down to being one of DC Comics' lesser horror characters.

By 1984, the character was on its last legs: a series written by Martin Pasko to cash in on Wes Craven's Swamp Thing movie was selling poorly, and facing cancellation. This is the point where Alan Moore was given the comic to see what he could do with it. His first issue was #20 in the run, and basically involved him tying up the loose ends of Pasko's ongoing storylines. At the climax of the issue, Moore had the Swamp Thing shot dead. And this, as they say, is where the story really starts.

Issue #21 - The Anatomy Lesson - is Moore's first proper run at the comic, and the official start of a collaboration with artists Steve Bissette and John Totleben which would last some forty-odd issues. On the DC Comics website, you can find a link to a 40MB PDF file of that story. The thinking, presumably, is that having got a free taste, you'll be keen to buy the six volumes that collect Moore's run on the comic. Download it now and have a look. Go on.

Good, isn't it? In recent years Alan Moore's spent so much comics time playing postmodernist games with other people's characters, that it's easy to forget that he originally made his name as a genre storyteller. And The Anatomy Lesson shows all his skills off to the full. At its heart is a typically audacious twist, as Moore revisits the origin of the Swamp Thing to reveal that everything we knew about the character is wrong - making him a very different animal from the one in the previous issue. In a way, it's similar to what he's been doing with established literary characters in his recent work, but to a 1980s comics audience this must have been mind-blowing.

The other thing that stands out is that this is a proper horror comic: setting up our expectations early on - "Will there be blood? I like to imagine so. Yes, I rather think there will be blood. Lots of blood. Blood in extraordinary quantities." - and building to a climax that delivers on those expectations. Moore understands the mechanics of a scary story, and never puts a foot wrong once - virtually every page ends in a beat that cranks up the tension even more. But aside from the obvious physical horror that a monster story is expected to deliver, there's also a dark psychological horror  running alongside it, as Swampy discovers that everything he knows about himself is wrong: an existential bombshell that's the final trigger for the promised bloodbath. Even if you didn't know about all the backstory, this is a perfect standalone tale of terror, with Bissette and Totleben's art always finding fresh and unexpected angles to the story.

As a preview, that file isn't perfect - either accidentally or otherwise, there's an entire page missing towards the end, although the momentum of the story should carry you over that. And I think it's a mistake to tack on the first three pages of the next issue at the end: it just looks like a shoddy ending. But if The Anatomy Lesson grabs your attention, rest assured there's a lot more where that came from, in a series which took Swamp Thing - and comics - into areas nobody could have possibly dreamed of back in the seventies.