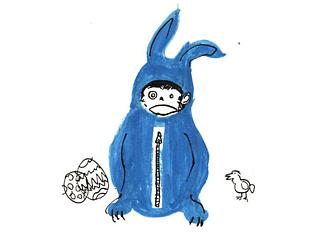 Plans for March? Well, you can expect a pair of reposts from the old place, relating to some stuff we did five years ago. Following on from the recent look back at the British Animation Awards 2006, there'll be a review of the 2008 candidates for their Public Choice Award. I might get around to doing that overview of the Pogues back catalogue in time for St Patrick's Day, or I might not. And there could well be a couple of other things reviewed along the way.

In the meantime, the Simian Substitute Site Of The Month for March 2008 is Monkey Mondays. To steal an explanation directly from the FAQ  page: "Since May 2000, artist Rob Elliott has emailed a monkey drawing to a list of subscribers nearly every Monday. Not everyone receives e-mail attachments properly, so the drawing is posted on the Monkey Mondays website as well." There's a rather lovely archive of the couple of hundred drawings he's created to date (including the Easter Monkey shown above), and a small shop in case you feel like sending him some money.

Anyway, I need to get back to sticking pins into this Action Man with a picture of Bill Gates' face stuck on its head. Any comments from you lot?