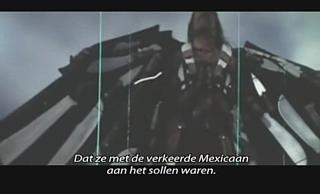 We've been through this a couple of times before already, but here we go again. Almost exactly a year ago, Quentin Tarantino and Robert Rodriguez released a three-hour film called Grindhouse, a fake double feature intended to celebrate the good old days of exploitation cinema. Its opening weekend in the US was catastrophically poor, and plans for its international distribution were scrapped almost immediately afterwards. For a while, it looked like the only way you'd be able to see the film in the UK would be via dodgy torrents filmed off the screen during that opening weekend, such as the Dutch-subtitled fuzzball shown here.

Some time later, Grindhouse got a UK release of sorts in extended versions of its two constituent parts: Tarantino's Death Proof and Rodriguez's Planet Terror. And, truth be told, neither of those set the box office on fire either. The chances of seeing the movie in its original, unbifurcated form seemed to me to have vanished to zero.

But I'm now happy to report that I was wrong.

Momentum, the British distributors of Grindhouse, are doing a quite unusual thing here. Having had their fingers burned with the release of Death Proof and Planet Terror, they're limiting Grindhouse to a series of one-night engagements across the UK, mainly late-night shows. It's a very smart move: they realise that these aren't movies aimed at a general audience, so they're specifically targetting the geeks and the cultists. They're advertising them rather poorly - the only list of the UK tourdates I've been able to find so far has been via a Tarantino fansite. But judging from the full house at one of the first London screenings at the Curzon Soho, it looks like it's a strategy that works.

Mind you, it doesn't help that we're doing this the wrong way round. The filmmakers described their process at the time of the original US release: they started out by making full-length features of Death Proof and Planet Terror, and then hacked them mercilessly in the cutting room to get them down to a sub-90 minute B-feature size. The idea was for audiences to see the short versions in cinemas first: then, some time later, the longer versions would be released on DVD allowing viewers to discover what had been lost in the editing. Seeing Grindhouse after the release of the two extended films, as we're doing here, makes for a different sort of experience.

But it's an experience I'd been looking forward to for some time, because my main beef with both movies was that they were both far too long. And the Grindhouse version of Planet Terror justifies its release on its own. Unless your surname's Romero, no movie about the walking undead deserves to be longer than an hour and a half: as I said at last year's LFF, with all its characters and subplots, the original 105 minute cut of Planet Terror had more in common with the bloated dynamics of a 1970s all-star disaster movie. But the Grindhouse edit shows you the spectacular difference that 15 minutes of cuts can make to the overall pace of a film. Rodriguez doesn't make any drastic changes to the storyline, choosing instead to tighten things up throughout the movie: entering scenes a little later, leaving them a little earlier, losing the odd line here and there. The result moves like a rocket, and feels much more like the sort of film it's homaging, even to the extent of occasionally losing control of the plot once in a while.

So the first half of Grindhouse does exactly what you hoped it would - and with the fake film scratches and presence of a suitably up-for-it audience, it's the perfect recreation of the midnight movie experience. The trailers by guest directors that follow Planet Terror continue that experience to varying degrees of success: Rob Zombie's Werewolf Women Of The SS gets by on some outrageously perfect stunt casting, Eli Roth's Thanksgiving doesn't quite get by because it's a little too knowing, while Edgar Wright's Don't is a gleefully manic piece of work which leads me to suspect he's using the climax of the trailer for Corruption as a template. These trailers are the key bits of Grindhouse that were lost in the split into two films, which we're now getting to see for the first time - sure, with the tiniest amount of effort you'll be able to find them online, but they work best in their proper context.

And then Quentin comes along and spoils it all. I mentioned my problems with Death Proof way back in August when it played Edinburgh, and this cut does nothing to improve things. If anything, it makes things worse, because the film's broken-backed structure is just made even more apparent. The idea of a movie completely switching tracks halfway through is a great one, but here it fails because the characters and plotlines set up in the first half are utterly uninteresting, even before you start comparing them to those of the second half. And what does Tarantino do to reduce the length of the film? He makes a couple of major cuts in the second half, leaving the first half as overlong and dull as it ever was. (The other major loss is over the end credits, where April March's rendition of Chick Habit no longer segues into her take on the French original.)

You suspect, when seeing Grindhouse whole for the first time, that this is much more Rodriguez's baby than Tarantino's. Planet Terror has the pace, the gore, and the distressed film stock (which looks fabulous on the big screen): Death Proof has a tremendous action climax, but takes forever to get there, and gives up on the distressed look after a reel or two. PT's re-edit is a thorough re-working of the movie that makes it harder, faster and better: DP just lazily removes a couple of scenes and leaves the rest intact. PT uses its 'missing reel' gag to replicate the disorientation of losing a major chunk of the story: DP's equivalent sequence feels more like a cynical advert for the extended DVD.

That final half hour of Death Proof is still absolutely worth seeing, but you'll get more of your money's worth if you catch it at the tail end of Grindhouse. This works best as a cinema experience, so it's worth making the effort to see it while it's doing the rounds: but I imagine a DVD will get released eventually. In the meantime, if you're an utter completist, there's always the six-DVD Japanese Grindhouse set that's just been released: it contains the two-disc edition of Planet Terror, the two-disc edition of Death Proof, a single disc of Grindhouse, and a bonus disc of Asian press conferences (a common special feature on Japanese and Korean DVDs, for some reason). A bargain at seven and a half thousand yen!

Off topic, but you may be interested to know when I have my Pop Up Protector off and click on your article, I get a 'japanese language installation pack' trying to take place ?

I think that's legitimate, Suze. There's a tiny bit of Japanese text on this page (in the amazon.co.jp purchase link for Grindhouse above), and your browser's trying to load up the Japanese character set so it can display it properly. It should be a harmless download, but there'll be no damage done if you say no to it.

Although I'd broadly agree with this assessment, I would say there were a few smaller cuts made in the first half of the Grindhouse version of Death Proof which did improve things. But I still agree the first half doesn't really work. And losing the French Chick Habit was a real shame (although as the credits had to be shared with Planet Terror, I understand why it had to happen). And I think the ending of Death Proof is a terrific way to end the whole thing.

I think anyone who has avoided the single film releases may have fewer problems with the Grindhouse cut of Death Proof than those of us who know what was wrong with it by personal experience. That first half comes as a lull in the middle of the Grindhouse experience, rather than a slow and tiresome beginning to Death Proof, so I think does less damage.

But yes, Planet Terror comes off by far better in the re-edit process.