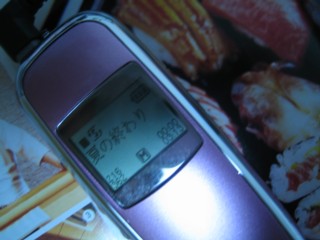 Think about it for a moment, and you'll realise that there's a subtext to my recent announcement regarding The Belated Birthday Girl spending three months in Japan to study the language: the two of us are currently having to spend a couple of months apart from each other. We're getting by, thanks to frequent use of Skype, but at the time of her departure it was a little bit tough on us both. The occasion called for a going-away present, and I knew I'd have to come up with something special.

I managed to do that and still get change from a tenner. That was the price of Asda's cheapest and nastiest 1GB MP3 player (coloured shocking pink, because if you're a female student in Japan you need to have pink things to carry around). But before I passed it on to her, I filled it up with thirty albums worth of Japanese pop music from my collection, so that she'd have another way of immersing herself in the language and culture.

Fancy doing that for yourself?

Well, it's easy. Just click on the 29 Amazon links below, buy all of the albums, and load them onto whichever MP3 player best suits your price range. Alternatively, for cheapskates, I've managed to find a sample video link for each album. However, be warned that Japanese media lawyers are amongst the cease-and-desistingest on the planet, and they frequently delete music videos from YouTube without warning. (Have a look at the shattered remains of my Halfby playlist if you don't believe me.) That caveat aside, here are the thirty albums I used.

Asa-Chang & Junray - Jun Ray Song Chang. Achingly lovely glitchtronica, which curiously evokes more memories for me of Italy than it does of Japan. Sample track: Hana.

Do As Infinity - Do The Best. Rock-solid best-of compilation by one of those male musician/female singer duos that seem to be so popular in this country. Sample track: Summer Days.

Judy And Mary - Warp. Historically, my fascination with Japanese pop can be traced back to a Virgin Atlantic flight I took to Hong Kong in 2001, where the inflight entertainment included a number of stonking J-pop tunes. This was one of them, from J&M's triumphant final album. Sample track: Brand New Wave Upper Ground.

Love Psychedelico - Golden Grapefruit. Their most recent album, showing a slight dip in quality that may be related to the couple of years it took them to record it. Sample track: Everyone, Everyone.

Love Psychedelico - The Greatest Hits. Cheekiest-titled debut album ever: the track I've included here was another one of those Virgin Atlantic mindblowers I mentioned earlier . Sample track: Last Smile.

Pizzicato Five - Made In USA. The oldest record in this collection, from one of the few Japanese bands with a true global hipster following, even years after they broke up. Sample track: Twiggy Twiggy.

Tomoka - Feel. Actually an EP of music from the soundtrack of the magnificently foolish movie The Calamari Wrestler. Feel is the lead single, but the main title song - with a chorus that translates as 'squid, squid, squid, squid, squid wrestler' - is the one you really want. Sample track: Ika Wrestler No Uta.

Various - Gathering Of Women 2. From a compilation of shouty girl pop-punk bands: I happen  to think that the sound of Japanese women yelling over guitars is a lovely thing. Sample track: Mrs Hurry! by Nanamaara.

Various - The Happiness Of The Katakuris (original soundtrack). Takashi Miike's horror musical has been reviewed on three separate occasions here, so you should be familiar with it by now. Sample track: Everyone You Love.

Yuki - Commune. Judy and Mary's former vocalist has been developing her own distinctive audio and visual style since the band split. This is the only video of this set that isn't on YouTube: coincidentally, it's the best one of the lot. Sample track: Sentimental Journey.

Yuki - Joy. Solo album number three, and by now Yuki's quirkier edges have been sanded off to turn her into a straghtforward pop idol - this video's very reminiscent of Kylie. Sample track: Joy.

Yuki - Prismic. Her 2002 debut, on the other hand, still has traces of the experimentation of Judy and Mary's later work. And videos featuring Pants Goblins. Sample track: The End Of Shite (requires age verification).

Yuki - Wave. By 2005, and her fourth album, there's no room for Pants Goblins - but even if her music is less innovative that it used to be, Yuki can still pull off the odd surprise or two in her videos. Sample track: Yorokobi no Tane.

Various - Together! Hello! Project is a whole universe of manufactured pop based around Morning Musume, a group of young girl singers whose members are callously sacked when they start hitting puberty - or else moved into one of the many spinoff groups represented in this compilation. Sample track: Koi Wo Shichaimashita by Tanpopo.

Morning Musume - No. 5. And this collection isn't. Though it does amuse me that whenever they do a video for a minor-key song like this one, judging from their faces, the direction they receive appears to be along the lines of "Your puppies are all dead! ACTION!" Sample track: Do It! Now.

Morning Musume - Best! Morning Musume One. If you have to own one Morning Musume record, a compilation of their early hits would seem like the obvious way to go: my choice here is another one of those songs that grabbed me on that Virgin Atlantic flight. Sample track: Love Revolution 21.

Tokyo Jihen - Adult. The part-time hobby band of ace vocalist Ringo Shiina has released three albums: last year's record Variety isn't included on this list simply because I've only just found out about it. Meanwhile, this is their second. Sample track: Shuraba.

Tokyo Jihen - Kyoiku. Their 2004 debut, and the one that most obviously crackles with the excitement of Ringo Shiina getting to cut loose with a band. Sample track: Gunjou Byori.

Ringo Shiina - Karuki Zamen Kuri no Hana. According to the culture section of the latest Rough Guide To Japan, this is a concept album whose title translates as Chlorine, Semen, Chestnut Flowers. I've owned it for five years without realising that. Sample track: Stem.

Ringo Shiina - Shouso Strip. Her second album, and this is where things start to get pleasantly weird while still working within traditional rock structures. Sample track: Honnou.

Ringo Shiina x Neko Saito - Heisei Fuzoku. And we finish off with Ringo's 2007 sorta-soundtrack to the film Sakuran, which should finally make it into London cinemas - well, the ICA at least - this summer. Sample track: Koyono No Kagiri.

There are other Japanese acts I like a lot - Soil & 'Pimp' Sessions, Cornelius, Globe, Plus-Tech Squeeze Box, and the aforementioned Halfby - but they all specialise in instrumentals or songs with predominantly English lyrics, which didn't fit my original brief. So stick with these 30 albums - rip them all at 80kbps, and they should just about fit onto a 1GB iPod. Hence the title, in case you were wondering. And when I write about the Polish pop scene in a month or so, maybe I'll call it pPod. (I love the way you're looking at me like I'm joking.)

Here's a slightly more interesting video for the Naivepop Or Petitfool song.

Just five days after this post, and three of the videos have already been taken down! Try these replacements, while you can.