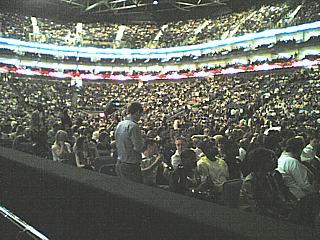 Although, to be fair, it didn't feel like that. I bought my ticket just two days before the show, spurred by an email from the O2's mailing list telling me that last-minute production seats had just become available. These are usually some of the closest seats to the stage, the ones where it's not apparent until they start setting up for the show whether or not they're actually worth selling. Which is how I ended up in row A of the side block of seats closest to the stage. I had a similar experience with a Prince gig at Earl's Court several years ago, where the unparalleled view by the side of the stage was offset by the terrible sound: you got to hear the songs through the PA, and then two seconds later you got to hear them all over again as they echoed off the back wall of the arena. The same thing happened at this show, but luckily that's less of a problem with spoken word material.

So I got to see Chris Rock do his thing in front of a crowd of around 16,000 people (I assume so, anyway: after all the hype about the attendance figures for the Friday show, nobody seemed to care about the Saturday one). For a breathtaking non-stop set of 105 minutes, he pushed all the right buttons for a comparatively young, mixed crowd. He flattered us with comparisons between our currency and his: "I took $3000 to the currency exchange at the airport, and they gave me a loaf of bread. White bread, too." He talked about the US elections, because he couldn't not talk about them: "Hillary wants to work in the office where her husband was getting blowjobs? There ain't enough redecorating in the world to make that work." And he described how even as a superstar comic, he still encounters racism: "The area where I live only has four black people in it: me, Mary J Blige, Jay-Z, Denzel Washington. My white next door neighbour is a dentist. Not the best dentist in the world, just a regular-ass tooth-pullin' dentist. If a black dentist wanted to move in there, he'd have to have invented teeth."

The individual lines are great, and there's no denying Rock has them by the ton. But when you start looking at the show there's very little going on under the surface of those lines. He'll start talking about female American stars like Britney Spears and Lindsay Lohan going off the rails ("you've got Amy Winehouse over here, but at least that girl can sing"), and then he'll pull away and talk about something else before he can engage with the subject properly. Which is weird, because when I've seen videos of his live performances in the past he's delved a lot deeper. There wasn't anything in this show that approached the depth and anger of something like this clip here. But of course, he was working in a normal-sized theatre then.

Maybe that's what stadium comedy means - like stadium rock, any attempt at subtlety will get lost in the acoustics of the Enormodome you're playing, so you need to find other ways to engage the crowd. And Rock played Madison Friggin' Square Garden last New Year's Eve, so he's developed strategies for working in huge places. He never stays still on the stage, prowling from one side to the other pretty much continuously. He doesn't tell any gags that need you to be able to see his facial expression to make them work: the one time he does at this show, it falls flat on its arse, even with big video screens either side of him. And most fascinating of all, he uses a lot of riffs that almost work like music or poetry, using repetition almost to the point of the riffs having a verse/chorus structure. He talks about how in society, "the people who get more shit are allowed to talk more shit," and then goes into a series of identically structured bits comparing the treatment of tall and short, thin and fat, rich and poor people.

The music of that structured delivery - which is very different from the delivery you can see in those clips of him playing normal theatres - make it great to listen to. It carries him through the weaker sections of the set, one of which comes unforgivably at the end: a series of men-do-this-while-women-do-this observations which just sound tired when compared with what he's capable of. Mind you, it's also possible that the final section doesn't work because it comes at the end of a one-and-three-quarter-hour set that's all pitched at one level. The only comedy set of comparable length I can think of was Billy Connolly back when he was good. I saw him do two and a half hours straight through at the London Palladium in 1985, and it was beautifully paced: a climax after just over an hour, followed by a more musical, less gag-heavy interlude, and then another build to the big finish. When the whole set is just bang bang bang all the way through, it wears you out a little.

The big surprise of the evening was this: it didn't feel like I was in a room with sixteen thousand other people. Possibly this was because of where I was sitting, where at least fifteen and a half thousand of those people were behind me. I was expecting the energy of a huge crowd to lift this gig up to another level, the way it would at a great rock concert: but it didn't. It was still a damn funny show, but I was expecting the audience to lift the roof off, and it didn't feel like they did to me. Maybe if I'd been further back in the crowd, it would have been a different story? I dunno.

That's a lot of carping over a show that I actually laughed a hell of a lot at: but one of the reasons why I went to see Chris Rock was curiosity about how the intimate art of stand-up comedy works in incredibly large rooms. I think it only really works if you go in realising that it's going to be a different sort of comedy as a result. (Again, rather like a music gig in the same size venue.) Still, Chris Rock now has a UK record audience he can boast about, at least until Lee Evans plays the O2 himself later this year. Evans'll have to break that record without me, though.