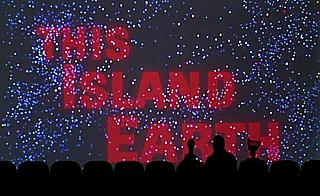 The reasons for the experiment have become more and more confused as time has passed. Which is probably why they had to summarise them in a song at the start of every episode. But they go something like this: a family of mad scientists - initially Dr Clayton Forrester (Trace Beaulieu), latterly his mother Pearl (Mary Jo Pehl) - have sent a guy into space - initially Joel (Joel Hodgson), latterly Mike (Michael J. Nelson) - in order to drive him nuts by forcing him to watch bad movies. Joel/Mike's survival mechanism is to watch the movies with his two robot buddies - Crow T. Robot (Trace Beaulieu again) and Tom Servo (Kevin Murphy) - and yell crap at the screen all the way through them.

This was the premise for Mystery Science Theater 3000, a TV series that ran between 1988 and 1999  on a collection of basic cable networks in the US.  Even if you've never heard of it before, you'd imagine that it'd probably be the sort of thing that would pick up an enormous cult following, and you'd be right. Which is why for several years now, fans have been paying upwards of $100 for copies of the long out-of-print DVD of Mystery Science Theater 3000: The Movie, a cinema spinoff from the TV show.

They may be delighted to discover that the DVD's just been re-released at a normal price. Or they may not. It depends.

MST3K, as it's affectionately known, is a show dedicated to poking fun at the work of other filmmakers (each 90 minute show focussing mainly on one full-length movie), so over the years it's encountered a lot of distribution and rights problems. During its run in the UK on the Sci-Fi Channel, it quickly became apparent that they could only show a dozen or so episodes, which played on a weekly loop for about two years. Similarly, Rhino Records have been doing a terrific job releasing old episodes on DVD - around 60 so far, of which I own, um, around 60 - but several classics will probably never see the light of day again owing to contractual issues. It possibly explains the lackadaisical attitude that production company Best Brains Inc. has towards piracy, happy for the shows to get out to people by whatever means are available - so the early seasons actually included the instruction "keep circulating the tapes" in the end credits, and YouTube currently has about 4,000 clips tied to the keyword MST3K.

Inevitably, problems were also encountered when the team made a spinoff movie in 1996. The studio behind the film, Gramercy Pictures, didn't really understand what they had made: legend has it that following a series of poor test screenings they pulled many of the smarter jokes from the script, hacked the film down to under 75 minutes, and reduced its release to a mere couple of dozen cinemas. A bare-bones DVD was released in 1998 - on my 1999 holiday in the States, I remember picking up a copy in a New York branch of HMV, then putting it down again assuming it'd drop in price over the next couple of years. Boy, was I wrong: a legal battle between theatrical distributors Universal and DVD distributors Image resulted in the disc being deleted, leading to a three-figure pricetag for used copies on eBay. That remained the situation until a year ago, when a passable German edition was released, featuring an optional German dub by Oliver Kalkofe and Oliver Welke (two comedians whose work, it transpires, we nearly saw on our visit to Hamburg last year). And now, finally, the US audience gets a DVD of their own - still fairly featureless, but at least with improved picture and sound.

Mystery Science Theater 3000: The Movie probably isn't the best place to start if you're a newcomer to the show. As I said, concessions have been made throughout to make the film more suitable for a general audience: the gags aren't as rapid-fire as they are on TV, the pop-culture references are less obscure, and the post-production re-edit makes this possibly the only TV spinoff that's shorter than a usual episode of the parent show. But at the same time, the opening-out for cinema purposes manages to kill off some of the show's simple charm. The meat of MST3K consists of the movie that's being insulted, plus Tom, Mike (in this case) and Crow silhouetted on top of it, and that obviously doesn't change. But the linking segments - short comedy sketches showing the crew on board their spaceship, the Satellite Of Love - gain a lot from their obvious low-budget roots: a single set made out of old junk, links filmed in one take with no cutting. When the movie uses a large, properly-constructed set, with cameras filming it from several angles, it just feels wrong.

What about the actual movie that Mike and the bots are riffing on this time? Well, it's the 1955 science fiction film This Island Earth, originally released by Universal International. ("Doesn't the fact that it's Universal make it International?", as they comment during the opening credits.) There's a school of thought that says this was a bad choice for MST3K:TM, simply because it isn't as crappy as most of the films used in the TV show: at the very least, it's fine in terms of its technical aspects, with some effects work that still holds up surprisingly well. But for all its classic status, it's still a bit daft - the story of a group of scientists forced to work for giant-foreheaded aliens has fewer surprises in it than it thinks it has, and all it takes is the occasional overuse in dialogue of a word like 'interocitor' to push it over the edge.

There are still plenty of laughs to be had from the riffing, for all these caveats. From the opening shot of the National Mall in Washington D.C. ("it's a long par 5 leading to the nation's Capitol"), the jokes come, if not thick and fast, at least thicker and faster than you could do them yelling at the screen at home.  By 1996 the seven members of the MST3K writing team had been working together for several seasons, and the style was pretty much nailed down: even with the restrictions put in place to make the film more generally accessible, there are gags ranging from obscure pop-culture references, through gratuitous picking at plot holes, to (my own personal favourite) the singing of a line of dialogue to the bombastic daaa-daaa-daaaaaaaaan score that accompanies it.

It's fair to say that since MST3K wrapped up in 1999, its makers haven't been quite sure what to do with themselves. Alumni of the show have, in recent years, worked on no fewer than three concepts that are virtually indistinguishable from MST3K: RiffTrax, The Film Crew and Cinematic Titanic. But in the end, the original is probably the best. MST3K: The Movie may not be the best introduction to the Best Brains universe: but if it gets people  rediscovering the old TV shows, it may be as good an introduction as you need. Keep circulating the YouTube links! (And, er, buy the DVDs afterwards.)