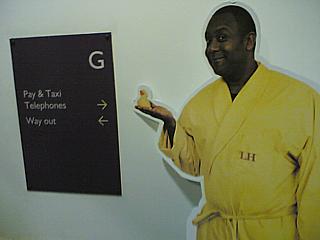 You've probably noticed that The Belated Birthday Girl and I have done the odd swanky hotel or two in our time. Hotel Una in Brighton: the Royalton in New York: the Excelsior in Hong Kong: Pousada de Sao Tiago in Macau: Hotel Fox in Copenhagen: the various designer palaces we visited during Europe By Train last year: and a whole string of gaffs from the minshuku to the monumental in Japan, with hopefully more to follow soon. Some of these have cost a few bob, true, but they've been worth it.

When I'm on business, though - particularly over the last couple of years, when I've moved from working for a global company to more or less working for myself - well, I don't have as much cash to throw around. Which is when my requirements for a hotel get scaled back considerably.

I've been staying in Premier Inns on and off for the last two years now: since a business trip to Nottingham, in fact, back in the days when they were called Premier Travel Inns. The change of name took place earlier this year, to separate the chain from its closest competitors at Travelodge, and was accompanied by a Lenny Henry commercial that's been all over British telly like a bad rash. People may go on about the naffness of the ad, but by God it's done their brand penetration no end of good: whenever I explain to people where I've been sleeping during business trips, they know the purple and yellow colour scheme instantly from the ads.

I've visited a few Premier Inns for work since then, in Liverpool, Altrincham and Belfast. And sure, when you've stayed in posher places it's easy to snigger at some of the chain's idiosyncrasies. Their insistence that you settle the full bill on arrival rather than on departure, not that they don't trust you or anything. (Which makes a nonsense of Lenny Henry's surprise at the bill at the end of the advert.) The complementary toiletries turning out to be containers of Lux shower gel bolted to the bathroom wall, not that they don't trust you or anything. The 10-channel TV that can't quite run to porn, and so offers you Men And Motors as a Freeview alternative. (To be fair on that last point, the TV selection has improved a lot recently.)

But I'm talking about the chain here for one reason only: it works. If you're looking for a cheap place to spend the night in the UK, they're probably your most reliable option. (Disclaimer: I've never stayed in a Travelodge, possibly because their locations seem more suited to people who drive everywhere, and I don't.) Thanks to a policy of ruthless acquisition from weaker, feebler business hotel operations, there are now over 500 Premier Inns in a whole host of useful locations: with the exception of that first Nottingham experience, every one I've stayed in on business has been within walking distance of my place of work. An efficiently laid out website allows you to quickly search for the closest hotel to any UK destination postcode, and book online right away. The rooms are laid out to a basic standard (I've been in rooms in Belfast and Woking which were freakily identical), with the handy business trip benefit of wi-fi availability for a small fee. And all of the hotels either have an integral restaurant or a next-door pub serving basic and reliable good food. (I could grumble about the service at the Belfast one, but they may have been having a bad week.)

All this comes at a pretty low price, which gets even lower at the weekends when the business people have all gone back home. Which is where things start to get a little strange for me: because in the last couple of months, Premier Inns have broken out of the compartment labelled 'work' and have started invading the other areas of my life. When The BBG's final weekend in London before her Japan trip involved a late Friday night movie in the West End and an early Saturday theatre matinee in Guildford, we spent the time between the two getting much-needed sleep at the Premier Inn County Hall, bang in the middle of town. More recently, Pick Of The Year recipient Lou and Edinburgh regular Charmian have had Big Scary Birthdays held out of London, which is why I've been staggering out of the Premier Inns in Woking and Bristol respectively the morning after, hung over but alive.

So whenever I've needed a cheap hotel in the UK for either business or pleasure, the Premier Inn has become my first choice. And they're looking to expand: recently they've been moving further east, having just opened their first hotel in Dubai. It seems ludicrous that their tacky logo will now be visible along one of the most affluent skylines on the planet, and it took me a few minutes to twig the significance of their breakfast's obsession with 'beef or chicken sausages'. But if, as has been hinted in the past, I ever get sent out to Dubai for work, I don't see how I could possibly stay anywhere else...

How topical, as if you look hard enough you can find reviews for six B&Bs here http://mdoust4mike.blogspot.com/ (not a shameless plug at all you see).