The Best Polish Songs... Ever! 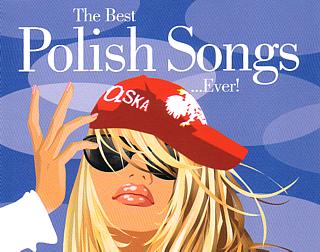 It's 2008 in England, and Poles are swarming into our country to steal our jobs and eat our babies. At least, that's what the Daily Mail would have you believe. Obviously, I think that's bollocks. I grew up in a predominantly Catholic community in the seventies, and there were several Polish families in there, so this is nothing new to me. (In fact, I've just Googled my school pal Stefan from 30 years ago, and it looks like he's still in town.) All that's changed are the numbers, and quite frankly it's interesting to watch the demographics of your country changing over time.

It's the little things, isn't it? Like noticing how the corner shops are stocking more products like Lech beer, the only alcoholic beverage to include one of its own side effects in its name. Or reading in The Guardian that EMI Records are making the latest in their The Best... Ever! series a 4 CD compilation of Polish hits. According to the report, "the record company hopes to appeal not only to the UK's booming Polish population, but also to British music fans who could listen to the CD and discover, says Kasia Krasuska of EMI Poland, 'that we are a very colourful and open-minded people'."

Well, count me in on that latter category. And after all, it's got to be an improvement on this site's last attempt at engaging with Polish culture.

Of course, I'm approaching this review of The Best Polish Songs... Ever! from a starting point of complete and total ignorance. I've no idea if these really are the best songs, or just the ones that EMI Poland could license most cheaply. The only thing I know is that the Polish Cultural Institute has given this compilation their seal of approval, and I'm sure they wouldn't just do that for any old tat. Plus, after a day or so's hard Googling, it would appear that the artists and songs included on these CDs are established enough for me to be able to cram this piece with links to official sites and videos.

So, based on this sample of 76 songs covering the last three decades or so, what can we learn about Polish music? Well, without any real historical context (I only looked up release dates on the sleeve whenever I thought "that sounds very eighties, how old is it really?"), I have to admit that around half the songs on this went in one ear and out the other. But then again, every country's pop music has its dully commercial genres, which all sound much the same wherever you are. So I can't really complain about the female power ballads like Virgin's Znak Pokoju and Patrycja Markowska's Swiat Sie Pomylil, the boy band slush of Andrzej Piaseczny's Szczescie Jest Blisko, or the pastiche R&B stylings of Kasia Cerekwicka's Na Kolana. They're pleasant enough, but apart from the language you can imagine these songs being released anywhere in the world.

Here's the main thing I wasn't expecting: there's a surprising amount of ska rhythms in use on these songs. Tracks like Lady Pank's Mniej Niz Zero , Szwagierkolaska's U Cloci Na Imieninach and Klaus Mitffoch's Jezu, Jak Sie Ciesze all do the dun-chukka dun-chukka thing like it's Coventry in the late seventies all over again. It's not until you hear something like Kult's Gdy Nie Ma Dzieci that you realise you've got it arse-backwards: these are traditional Polish folk rhythms that are making their way back into popular music by stealth. It's an implicit connection with the past that the most traditional tracks on this compilation, such as Kayah & Goran Bregovic's Prawy Do Lewego and Brathanki's Czerwone Korale, make more explicit.

There is, of course, the cliched assumption that Polish pop music may be a little dated compared with what we're currently doing in the West, and that's only occasionally true. There's a fair chunk of eighties-sounding material on these four discs - some of it actually dates back to the eighties (Kombi's Slodkiego Milego Zycia), some of it is nineties vintage (the Seinfeld slap bass and gated drum sounds of Edyta Gorniak's Jestem Kobieta), and there's at least one example which only goes back as far as 2005 (The Car Is On Fire's Cranks). Although in fairness to that last one, at that time there were plenty of British bands ripping off old Gang Of Four riffs too.

Finally we have the fourth disc, which in a sneaky bit of sequencing contains seventeen songs in English. Anita Lipnicka & John Porter's Bones Of Love is a blackly amusing opening to this sequence, with a nice sense of flamencoesque drama. T. Love's He Was Born To Be A Taxi Driver is amusing for entirely different reasons, as it's completely obvious that English is not its lyricist's first language. (Every lyrics site on the internet claims that the chorus contains the line “Motherfucker, the bit of a kev”, and I have no idea what this means.)  Meanwhile, Maanam's Lipstick On The Glass cheats by only having its chorus in English (i.e. the title plus two grammatically incorrect words), while Natalia Kukulska's Sexi Flexi is another funky eighties throwback that's less than a year old.

There are a couple of cover versions included here, which entertainingly work as mirror images of each other: Makowiecki Band grind through a four minute heavy intro before launching into the riff of Can't Get You Out Of My Head, while  Goya takes Smells Like Teen Spirit in the opposite direction by performing it in the style of Enya. But if there's one guilty pleasure I'll take away from this final CD, it's Blue Cafe's You May Be In Love. It's centered round an astonishingly mannered vocal by Tatiana Okupnik, like someone's programmed a robot with Amy Winehouse CDs. But the sheer unpredictability of the arrangement - particularly in the version on the album, which is longer than the video edit - makes this infectiously listenable throughout.

I honestly didn't know what to expect when I started this. As it turns out, Polish pop is - like they said - colourful and open-minded: there's all the average stuff that any other country's music industry churns out, but there are also plenty of surprises. If you want to find out more, you could have a look at the YouTube playlist I've put together from the album (because in the end, the title pPod was too good to not use). And if you want to explore beyond The Best Polish Songs... Ever!, it turns out that EMI Poland has their own YouTube channel where they make the latest Polish videos freely and legitimately available. Why, it's almost like they planned it...

Always nice to hear from our Polish readers.

I'm DJing in Manchester at a polish society event and I'd really like to buy this CD off you for £10. The party is in Manchester and you are invited.

email me on 88.josh@gmail.com if you're interested in either of these things!

or search "polish society @ revolutions" for the facebook event.

Hey josz, thanks for accidentally pointing out to me that I can now sell this CD on Amazon for over thirty quid!

Actually, that makes me sound horrible. Truth is, I've got rather fond of the CD and don't particularly want to part with it. Did you know it's still going for £9.99 new on Play, albeit with a possible lead time of 1-2 weeks?